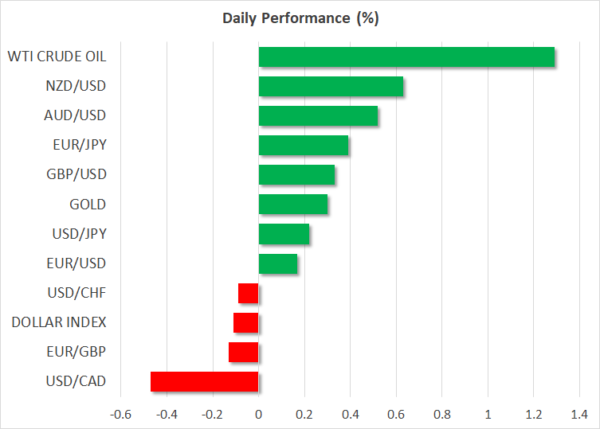 Equity markets were looking more cheery on Friday after somewhat of a tumultuous week. Renewed concerns about economic growth amid rising inflation and ongoing disruptions caused by the Delta variant, China’s broadening crackdown on private enterprises, and fears that central banks may remove stimulus too soon all came to a head this week to knock stocks off their pedestal.

However, whilst the losses were widespread across different sectors and regions, US tech stocks had a less disastrous week due to their defensive appeal. But it was Japanese stocks that bucked the global trend as they continued to rally on expectations that whoever replaces outgoing Prime Minister Yoshihide Suga will add more fiscal stimulus to Japan’s virus-stricken economy.

As for the improved mood today, investors were encouraged by signs of a thaw in relations between Washington and Beijing after President Biden had a 90-minute call with his Chinese counterpart – the first in seven months. Disputes over China’s trade practices and influence in the South China Sea have been some of the White House’s frustrations in recent years. And although it’s too early to say whether anything substantive has come out of the talks, it’s provided a much needed lift in Asian markets today, especially as worries remain about China’s tightening grip on the private sector.

The gaming industry is the latest to come under the scrutiny of Chinese regulators, though there was some relief after authorities said they will be slowing not halting the approval of online games following earlier reports that they would be suspending them.

A late bounce back for stocks

China’s CSI 300 index jumped 0.9% today, while in Tokyo, the Nikkei 225 index closed at a six-month high. In Europe, the Euro Stoxx 50 was up 0.3% in early trade and US stock futures were also pointing to solid gains, particularly the Dow Jones, which was last indicated up 0.5%.

Heading towards the September FOMC policy meeting in just under two weeks’ time, Wall Street might struggle to maintain its recent bullish momentum as the Fed looks almost certain to flag tapering for later in the year, most likely in November. Fed Governor Michelle Bowman was the latest FOMC member this week to downplay the surprise miss in the August payrolls number and call for some scaling back of the Fed’s asset purchases.

Better-than-expected jobless claims numbers on Thursday and record job openings in Wednesday’s JOLTS survey underscored the view that the US labour market remains in good shape.

However, as the Fed still ponders it’s next move, the European Central Bank has beaten it to it, announcing yesterday that it will slow its bond purchases to a “moderately lower pace” as the Eurozone recovery solidifies and inflation picks up.

Not only was the decision widely expected, but so was President Lagarde’s attempt to brand the policy change as ‘recalibration’ rather than tapering. Nevertheless, investors are more likely to get hot and bothered about the ECB’s tapering strategy closer to December when policymakers will have to decide whether to use the PEPP’s full allotment and if the regular asset purchase programme should be ramped up once PEPP ends.

That might explain why the euro posted only modest gains on Thursday, while its advances today were mainly on the back of a weaker US dollar.

The euro is testing the $1.1850 level as the greenback skids again despite steadying overnight. The Japanese yen also pulled back today amid the more positive risk tone.

The New Zealand dollar was the best performer, shooting up towards $0.7150 to nearly wipe out its weekly losses. Aside from the stronger risk appetite today, signs that New Zealand is bringing the Delta outbreak under control, paving the way for a rate hike by the RBNZ in October, is also boosting the kiwi. The aussie wasn’t that far behind and sterling also gained, climbing to one-week highs in spite of disappointing growth data out of the UK.

UK GDP barely expanded in July, sharply missing estimates, but the Bank of England will probably still be able to hike rates next year so this is likely to keep the pound supported. 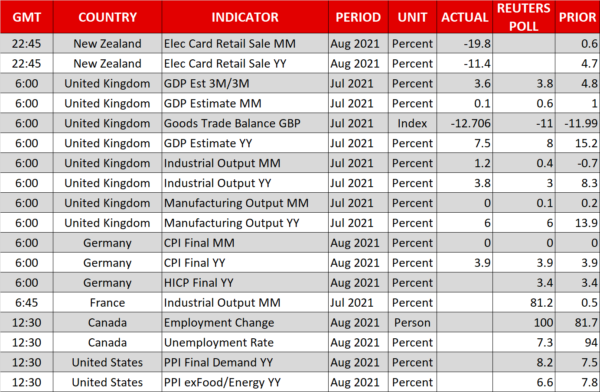