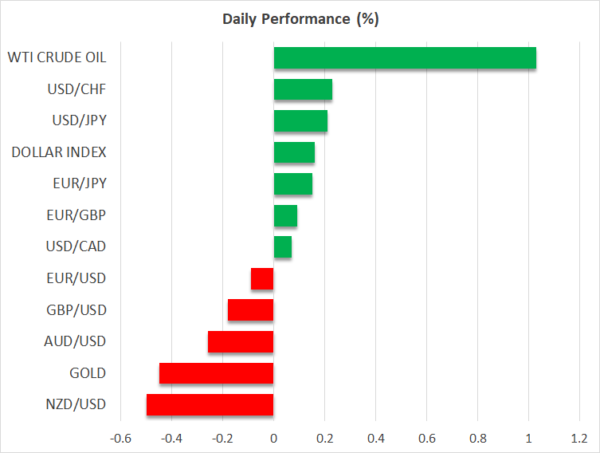 The specter of rising interest rates has returned to haunt financial markets. The Fed breathed some life back into Treasury yields last week after it opened the door for a rate increase next year, and the rally has gone into overdrive this week thanks to some signs that inflation won’t cool anytime soon.

There are essentially two energy crises playing out simultaneously in Europe and China. In Europe it’s driven mostly by a natural gas shortage that is feeding into surging electricity prices, while in China a scarcity of coal has resulted in widespread power outages that have plagued heavy industry.

China’s power crunch threatens not only to kick the economy when it is already down, but also to ripple through global markets by exporting inflation abroad as manufacturers raise their prices to cope with the production fallout. With growing signs that inflation will be more persistent, investors have started demanding a higher return to hold bonds, hence the spike in yields.

When yields move higher, the assets that typically suffer the most damage are stocks with stretched valuations, the Japanese yen, and gold prices. That’s exactly where the hammer has fallen this time. The tech-heavy Nasdaq is under heavy pressure as future cash flows are worth less when a higher discount rate is used in valuation models. Gold held up surprisingly well but is unlikely to come out unscathed in a world of rising real rates and a yield-powered dollar.

With coal and natural gas markets going berserk, it’s only natural that there would be positive spillover effects into crude oil as some producers switch to alternative energy sources. And since changes in oil prices correlate quite closely with changes in inflation expectations, the fate of this rally could ultimately impact monetary policy too.

All eyes are now on OPEC. The cartel will meet next week and the sword hanging over oil prices is whether it will react to the unfolding energy crisis by opening its supply taps even wider. If not, panic-buying could kick into higher gear.

The Canadian dollar hasn’t capitalized much on rising oil prices as risk sentiment remains shaky and the US dollar has stood tall. That said, pairs like loonie/yen paint a much clearer picture of recent dynamics.

Dollar firms ahead of Powell testimony

The bounce in yields has re-energized the world’s reserve currency, which is currently testing its recent highs against the euro. Since the ECB isn’t expected to touch the interest rate button over the next few years, any rally in European yields tends to be limited, allowing US yields to rise faster and adding downward pressure to euro/dollar.

In other news, regional Fed presidents Rosengren and Kaplan both resigned their posts after a scandal that they were actively trading equities. While not illegal per-se, the optics weren’t good as there was a perception of conflicts of interest. Rosengren would have been an FOMC voter next year, so his replacement will be crucial.

As for today, there’s a heavy dose of speeches from central bankers, starting with ECB President Lagarde at 12:00 GMT. Then at 14:00 GMT, Fed Chairman Powell will testify before the Senate Banking Committee. He will most likely be grilled on inflation, the infrastructure packages the Democrats are working on and their impact on the US economy, as well as the debt ceiling drama.