Consumer prices rose by 2.2% in the September quarter. That resulted in the annual inflation rate rising to 4.9% – up from 3.3% last quarter and the highest level since 2011’s GST related spike.

The September quarter increase was well above our own and the average market forecast for a 1.5% increase. Inflation has also been running much hotter than the RBNZ’s last published forecast (released in August). 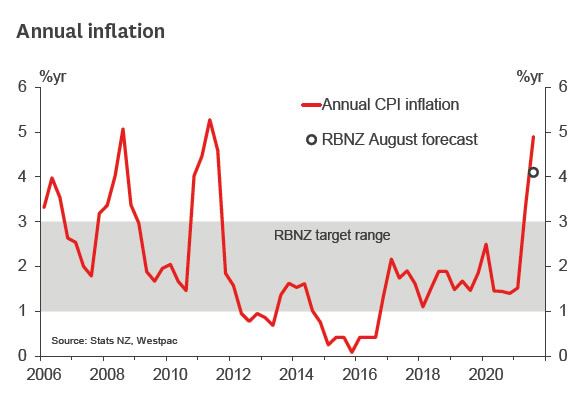 The rise in inflation over the past year has been broad based, and Covid-19’s fingerprints are all over it. Ongoing disruptions to global manufacturing and supply chains have resulted in shortages of many goods, as well as strong increases in transport costs. At the same time, the recovery in global demand has seen commodity prices pushing higher, with global oil prices doubling over the past year.

Closer to home, the closure of our borders has meant that businesses across the nation are struggling to find staff, and wage costs have been rising as competition for workers has increased.

However, the rise in inflation isn’t just due to cost pressures – domestic demand has recovered much faster than expected. That has given businesses greater leeway to pass on cost increases into the prices of consumer goods.

The combination of rising cost pressures and strong demand was clearly evident in the September quarter inflation figures. For instance, there was a particularly large increase in the cost of building a new home, with building activity running hot and many construction firms struggling to source materials. Construction cost rose 4.5% over the past three months alone. That follows a similar sized increase last quarter and leaves construction costs up 12% over the past year.

We also saw larger than expected increases in the prices for many recreational consumer goods, like toys and computer equipment, as well as firmness in the prices for household furnishings and durables. Spending in these categories has been running hot since Covid-19 first arrived on our shores, and across the globe retailers are struggling to get enough stock to keep up with demand.

On top of the above rises, the September quarter also saw a strong 2.7% increase in food prices, underpinned by higher prices for groceries, meat/poultry, and fruit and vegetables in recent months. The annual increase in local authority rates was also larger than it has been in some time, rising by 7.1%. However, inflation pressures have not been limited to a few categories. Strength in inflation remains broad based, with most of the measures of core (underlying) inflation released from Stats NZ today running above 3%. In many cases they are running above 4%. 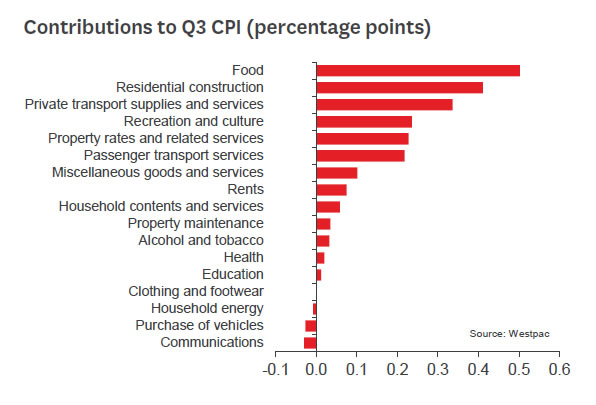 Inflation is expected to remain above the RBNZ’s target band through much of the coming year. The supply side pressures that have been adding to inflation in recent months look set to endure for some time yet, and they could become even more pronounced over the coming months as we head into the holiday shopping season here and abroad.

But even when those supply side cost pressures eventually ease, inflation is expected to remain firm, underpinned by strength in domestic demand. And while the current elevated Alert Level in parts of the country may moderate some of that strength in the near term, we expect that activity will recover quickly when the Alert Level is eventually dialled back. Consequently, we’re still looking at a strong medium-term inflation outlook.

That firmness in demand and related persistence in inflation pressures is especially important for the RBNZ. While central banks often look through temporary cost shocks (like a spike in oil prices), inflation pressures in New Zealand are set to remain strong for some time. Indeed, inflation expectations have been pushing higher and large numbers of businesses are signalling that they plan to increase their prices over the coming months.

Against this backdrop, we expect a series of OCR hikes from the Reserve Bank over the coming months. We’ve pencilled in 25bp increases at the November, February and May policy announcements. At that point, we expect that the RBNZ will pause to assess how the economy is tracking, with the OCR set to continue gradually rising back to 2% further ahead.

Despite the much stronger than expected September quarter CPI result, we don’t think a 50 basis point hike is likely in November. The RBNZ has previously noted that it is conscious of the two-sided risks surrounding the economic outlook. And with the current period of a heightened Alert level dragging on longer than expected, the RBNZ is more likely to move in a series of smaller steps rather than in large bounds. 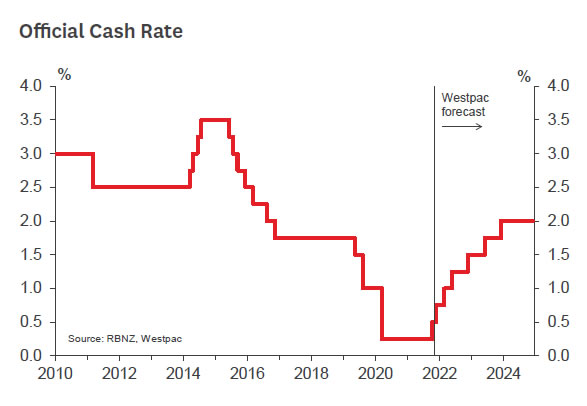