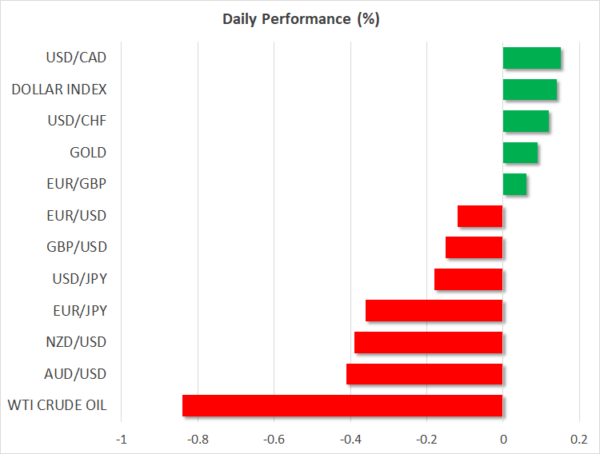 Equity markets were feeling the strain of a fresh panic about China’s heavily indebted property sector after troubled real estate giant – Evergrande – told investors that the sale of its property services unit for $2.6 billion had collapsed. Evergrande is desperately trying to raise the finances it needs to meet the bond interest payments on its $305 billion of debt and the sale of Evergrande Property Services Group was seen as being vital to avoiding a default.

The company has until Monday to settle a coupon payment of $83.5 million on an offshore bond as the 30-day grace period is set to expire at the end of this week. A default could have a huge domino effect on China’s entire real estate market and the wider construction industry. And although it’s unclear how big the international spillover would be, the prospect alone of the Chinese economy slowing even further than it already is could cast a massive shadow over the growth outlook globally.

Shares in Evergrande group were last down 12.5%, however, the Hang Seng index in Hong Kong managed to rebound from its session lows and China’s CSI 300 index ended the day in positive territory. While the Evergrande saga is far from over, assurances from the government that the debt crisis is unlikely to escalate into something bigger appears to be helping in maintaining some order in the markets for now.

Stocks in Europe opened in the red and US futures slipped but the losses were modest. Although the renewed jitters are certainly weighing on sentiment on Thursday, markets were due a correction following six straight days of gains for the S&P 500. The tech-heavy Nasdaq indices have already run out of steam, closing lower on Wednesday even as the Dow Jones Industrial Average flirted with record territory.

Unless the Evergrande crisis really does blow up into a major catastrophe, Wall Street still has plenty of support that could keep the rally going for a while longer. Democrats are closing in on a deal on a key part of President Biden’s economic agenda. The social spending bill looks almost certain to have a price tag that’s much lower than the original figure of $3.5 trillion, but anything above $1 trillion combined with the infrastructure bill of $1.2 trillion should nevertheless provide a substantial stimulus to the flagging US economy, which appears to be slowing.

In the meantime, some soothing words from Fed policymakers that a rate hike is a long way off is also likely putting a floor under stocks. Speaking on Wednesday, both Mester and Quarles suggested it was too early to start talking about rate hikes, easing the upward pressure on 10-year Treasury yields, which had climbed to five-month highs yesterday.

The recent surge in inflation expectations in the US and elsewhere have been boosting long-dated government bond yields. But today’s pullback in yields is likely to be short-lived as the US 5-year breakeven inflation rate has shot up to 2.9% and is showing no sign of easing.

Commodity currencies take a hit as dollar and yen climb

The US dollar, however, edged up on Thursday despite the softer yields, as the increased risk-off drew some safe-haven demand. The Japanese yen also benefited from safe-haven flows, pushing the dollar to below the 114-yen level.

The euro and pound both slipped, but the biggest losers were the riskier commodity-linked currencies. The Australian and New Zealand dollars were each last down about 0.35% versus their US counterpart, while the Canadian dollar was off by 0.1%, finding some support from oil prices, whose losses were minor relative to their recent gains.

All three currencies had rallied to multi-month highs against the dollar this week as the market tone has improved and on rising expectations that the respective central banks would have to tighten monetary policy at a quicker-than-anticipated pace. Fed speakers and the weekly jobless claims coming up later today could determine whether the mood brightens up again.