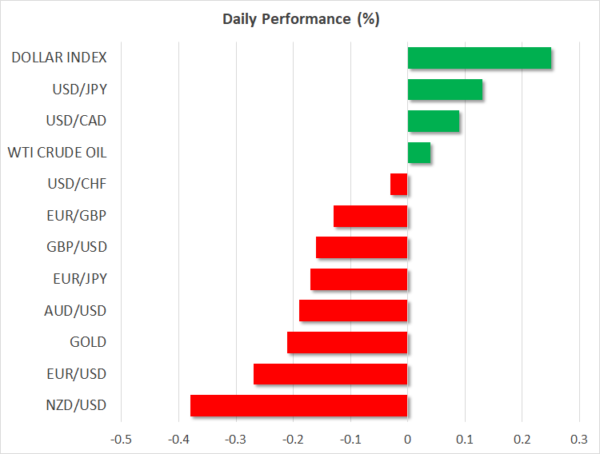 The European Central Bank said all the right things yesterday. President Lagarde highlighted that market expectations for a rate increase next year are not realistic and stressed this inflation episode remains transitory, but the euro still stormed higher alongside European yields.

Investors are just not buying what the ECB is saying. With inflation expectations going ballistic, markets are betting the central bank will be forced to take its foot off the gas sooner, first by slashing asset purchases and then with tiny rate increases.

Admittedly though, this may be a bridge too far for the Eurozone. Asset purchases will most likely be gutted soon but raising rates is an entirely different beast, especially when the economy isn’t firing on all cylinders, the labor market is still fragile, and the central bank is traumatized by the last time it raised rates in error.

As for euro/dollar, the risks remain skewed to the downside. The ECB is now priced for perfection, leaving plenty of scope for disappointment in case growth continues to underwhelm. In contrast, the US economy will weather the energy storm much better and the upcoming spending injections from Congress could juice up growth, allowing the Fed to bring forward its own rate increases.

The bond market is feeling the blues lately, ringing alarm bells about a slowdown in economic growth as central banks overreact to this inflation scare. The yield on the 30-year US Treasury note has fallen below the 20-year one, signaling that the powerful policy tightening being priced in for the next few years will ultimately backfire and hamstring both growth and inflation.

This is something to keep a close eye on. Even though the bond market has been heavily distorted by years of central bank intervention, it still manages to smell out macroeconomic shifts and recessions well ahead of the commodity and stock markets.

Speaking of macro shifts, President Joe Biden announced that the Democrats have finally reached a framework agreement on his social spending agenda. The price tag of the package has been pushed down to $1.75 trillion, which still sounds massive but is not when you consider it will be spread out over a decade.

It would be paid for by introducing a minimum tax of 15% on corporate profits, raising income taxes on the very wealthy, and levying an additional 1% on stock buybacks. The news had no visible impact on the stock market, although US futures are pointing to a lower open on Friday after both Amazon and Apple reported disappointing earnings.

It is quite incredible that the S&P 500 is about to close the month almost 7% higher despite higher yields, energy markets going bananas, crippled supply chains, slowdown risks, and minimum taxes coming to bite the biggest corporations.

A barrage of European economic data has just been released and even though both inflation and growth metrics beat expectations, the euro has been unable to capitalize.

The focus now turns to the American data that will be released later on. US economic growth for Q3 disappointed yesterday, but the good news is that most of this came down to falling car sales as chip shortages raged. Demand is still booming but some sectors have hit a supply wall.

A massive week lies ahead. Japan will hold its general election during the weekend, there are central bank meetings in Australia, America, and the United Kingdom, before volatility reaches a crescendo with Friday’s nonfarm payrolls report.