The Reserve Bank of New Zealand (RBNZ) will wrap up its latest meeting at 01:00 GMT Wednesday. A rate increase is definitely on the menu – the real question is how much rates will be raised. There’s no real reason why the central bank should go for a ‘double’ rate hike with so many risks still on the radar, which leaves room for disappointment in the FX arena.

New Zealand’s economy is running like a well-oiled machine. An impressive dose of government spending throughout the crisis coupled with reduced immigration have seen the labor market stage an incredible recovery. The unemployment rate hit a record low in Q3 even as labor force participation hit a record high, which means the jobs market is at its strongest point ever.

Inflationary pressures have also intensified, with the CPI rate hitting a decade high of 4.9% and inflation expectations surging across the board. This suggests businesses and consumers expect higher inflation to be a more permanent phenomenon over the next few years. 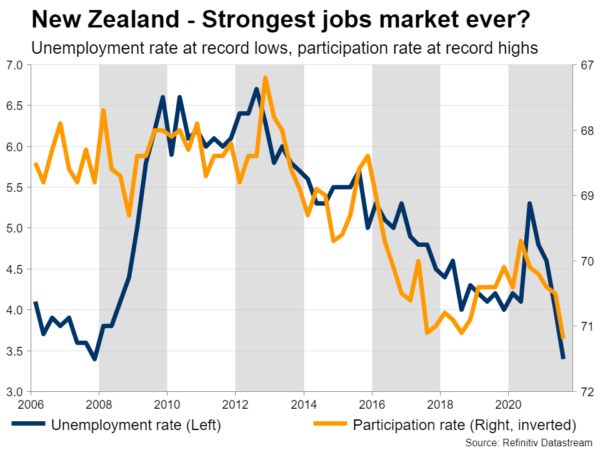 The final argument for raising rates is the housing market. House prices are still rising at an alarming pace, fueling worries of a ‘bubble’. The central bank has already imposed several restrictions to cool this market, but higher interest rates are usually the most powerful tool.

With all this in mind, a rate increase this week seems almost certain. The economy seems ready to overheat and inflation cannot be explained away as ‘transitory’ considering how strong the labor market is. The real question is how much the RBNZ will raise rates.

A regular 25 basis points rate increase is already priced in, and money markets also assign a 40% chance for a ‘double’ hike of 50 basis points. In other words, investors are split on the matter. 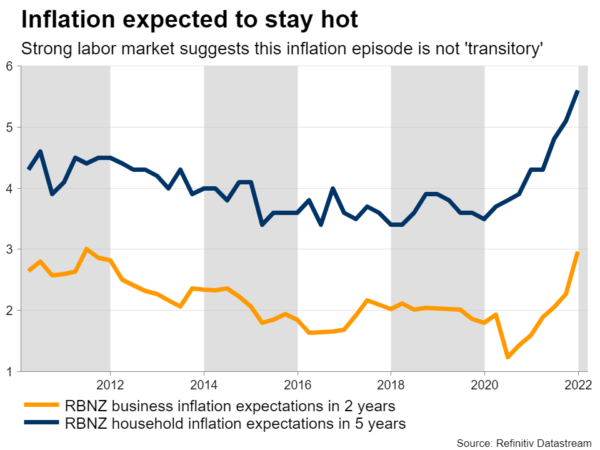 While the strength of the economy itself could certainly justify a double hike, it is not really a wise choice from a risk management perspective. Such a drastic move would risk shocking the economy at a time when there are still several risks on the radar.

Covid infections are spreading across the country and China’s slowdown threatens demand for New Zealand’s commodity exports. Both factors argue for some caution.

If the RBNZ indeed plays it safe and just delivers a ‘single’ rate hike, that could come as a disappointment for the New Zealand dollar. Taking a technical look at kiwi/dollar, a potential break below the 0.6980 barrier would turn the spotlight towards 0.6860.

On the other hand, a double rate increase could propel the pair higher for a test of 0.7080, where a violation might open the door for a test of the 0.7215 region.

In the bigger picture, whether the initial move is sustained will depend on the interest rate forecasts the central bank will publish. How quickly do policymakers expect rates to be raised moving forward and what is the likely peak?

Here too, there’s room for disappointment. Markets now anticipate the RBNZ to raise rates at every single meeting over the next year, which seems excessive. It could happen, but everything needs to go perfectly in the economy. And because it is already priced in, the upside potential in the currency isn’t huge. 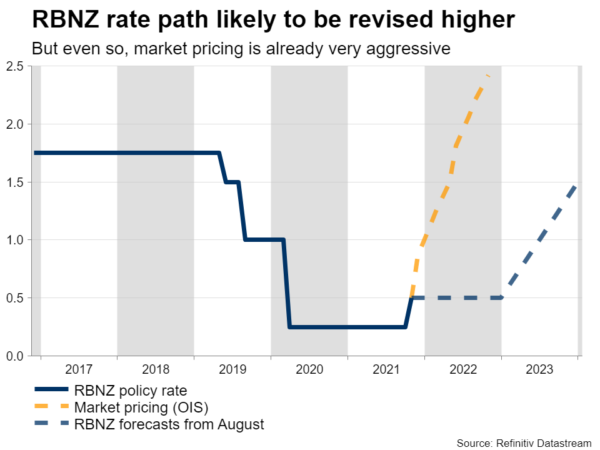 On the flipside, if some shock hits New Zealand and prevents the central bank from tightening so aggressively, the potential downside in the kiwi would be much bigger as markets dial back their aggressive expectations.

When a central bank is priced for perfection, the risk-to-reward profile for its currency is not very attractive.