As we expected, the BoC left its key policies unchanged today, holding the overnight rate at 0.25% and continuing its QE reinvestment policy. It maintained the forward guidance commitment not to raise rates until economic slack is absorbed, which as of October was expected to be in the middle quarters of 2022. As per recent practice at non-MPR meetings, that timeframe was simply reiterated today. We think there’s risk that the economy reaches full capacity even sooner given rapid improvement in the labour market in recent months including last week’s impressive November jobs report. Indeed, today’s statement noted the employment rate is “essentially back to its pre-pandemic level” and wage growth is picking up. The bank also said the economy had “considerable momentum” heading into Q4 though flooding in BC and Omicron uncertainties could weigh on activity.

Shorter-term yields fell and the Canadian dollar was a touch weaker following the announcement, suggesting markets were looking for a more hawkish tone today. The BoC was held back by Omicron uncertainty but today’s statement suggests that as long as that risk doesn’t intensify in the next seven weeks, the BoC will sound more hawkish in January. Markets are now pricing roughly 50/50 odds of a rate hike at that meeting though we think it’s more likely the BoC will signal upcoming rate hikes rather than actually raising rates in January. Moving up its forward guidance (i.e. slack absorbed in H1/22) or dropping that guidance altogether (as it did before raising rates in 2010) would send an “every meeting is live” message. We continue to look for interest rate liftoff in April with three rate hikes over the course of 2022.

These forecasts come with a caveat that we still don’t know what the BoC’s policy mandate will look like over the next five years. Its inflation-target renewal (a joint exercise with the federal government) is due any day now—we wouldn’t be surprised to see an announcement ahead of Governor Macklem’s speech next Wednesday. Our forecast assumes the BoC will continue with flexible inflation targeting, taking labour market developments into account in setting monetary policy but stopping short of a dual unemployment-inflation mandate. 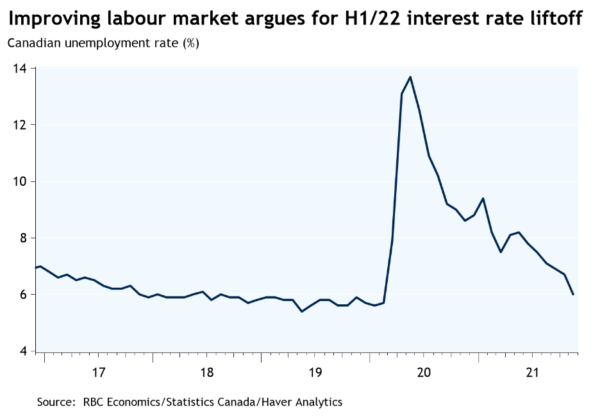