Japan: Running On All Engines

The Japanese economy picked up speed in Q2 and grew at an annualised growth of 2.5% q/q. Thus, the economic upswing continued and the last six quarters now constitute the longest period of positive growth in Japan since before the crisis. According to Bank of Japan’s TANKAN survey, businesses are turning increasingly upbeat, more companies have reported favourable conditions since Q2 16 and more companies are looking for favourable conditions in Q3. On the other hand, PMIs have decreased in July and August, particularly driven by the service sector, which could signal some slowdown in domestic demand. Manufacturing PMIs have also shown some signs of slowdown, which is also what we see in industrial production over the summer. Composite PMI now stands about one index point lower than Q2, which indicates a decrease in Q3 for the first time in 2017. PMIs thus point to some slowdown in GDP growth.

Growth was primarily driven by private consumption and investments in Q2. Looking back on the recent year, exports have been the key driver, though. We do expect more from private consumption going forward. Wage inflation remains stubbornly low but with a labour market that is turning increasingly hotter and unemployment that has fallen to even lower levels, total wage income is increasing, even if wages are not. We believe there is room for private consumption to continue contributing to growth. Consumer confidence has also remained upbeat over the summer, although it does look like some slowdown in private consumption in Q3. Both consumer surveys and auto sales have looked weak in August. Retail sales, on the other hand, was strong. We expect private consumption to stay on a positive trend but as long as wage increases remain depressed, it will probably be at a moderate pace.

On the private demand side, we have also seen a decent pick-up in investments recently. Both business and residential investments have been increasing since the current economic upturn began in Q1 16. Indicators are mixed, as housing starts decreased in July and businesses signal a slight increase in production capacity in Q3. Machinery orders, on the other hand, rebounded in July after a weak first half of the year. Looking beyond Q3, we expect the positive trend in business investments to keep up, as the output gap increases and labour becomes an increasingly scarce resource. At the same time, the Tokyo Olympics 2020 remains supportive for investments. Bank of Japan (BoJ) has estimated that investments in infrastructure, hotels, commercial properties, etc., amount to 1.3% of annual GDP spread out over the years 2014-2021.

Overall, exports have still been the main driver of the upturn, especially over the past year. Japan is particularly dependent on the US and China, which account for close to 40% of total exports. Particularly exports to China have been key, standing at close to 20% y/y in nominal terms, but also US demand has been strong. Whereas private demand could be slowing somewhat in Q3, exports have been strong and rebounded in July. An increasing share of companies are reporting excess demand in Q2 and expectations of the same in Q3. Japanese exporters strongly benefit from the global economic upturn and the relatively weak yen.

We expect monetary policy to remain extremely accommodative throughout the forecast period, which will also be supportive for demand, both domestically and abroad. BoJ has pledged to hold measures in place until the 2% inflation target is reached. Inflation has been increasing through 2017, but mainly due to rising energy prices. Underlying price pressure in Japan remains very low and BoJ’s inflation target is currently nowhere within reach. Almost three decades of very low inflation mean companies are reluctant to raise prices and try to cut back on services and streamline their operations instead of raising wages. Low worker mobility and a preference for job security over wage increases are big obstacles for wage inflation.

Public spending is also set to remain supportive for the economy through the fiscal year 2017, which runs from Q2 17-Q1 18. We expect to see GDP-growth around 2% q/q annualised through the rest of fiscal 2017 and a significant slowdown in fiscal 2018 when stimulus starts to wear off. 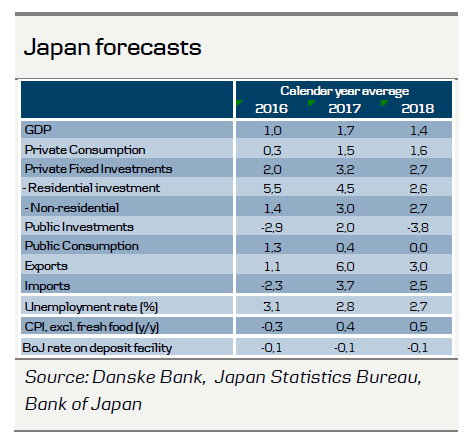 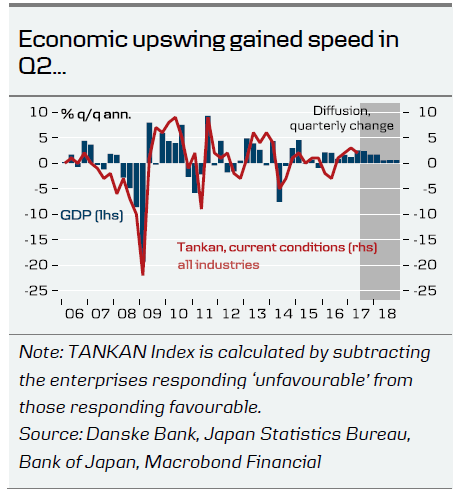 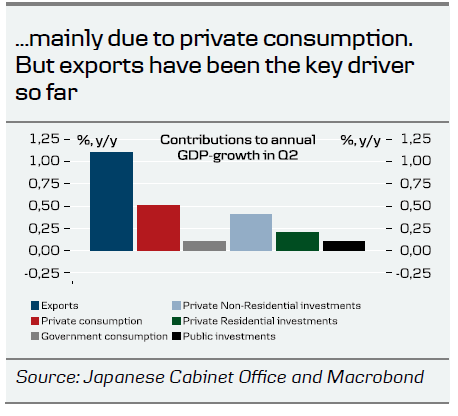 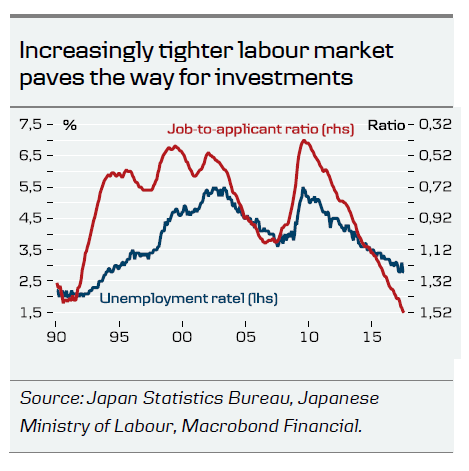 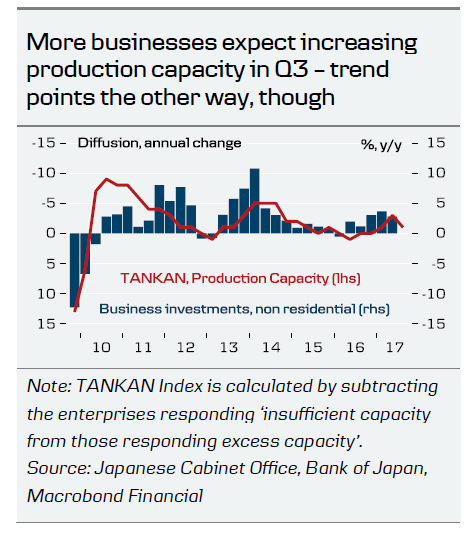 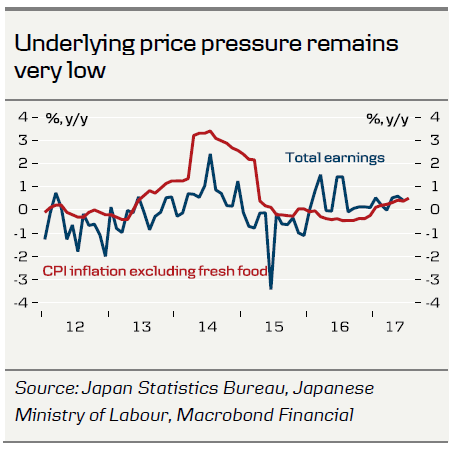 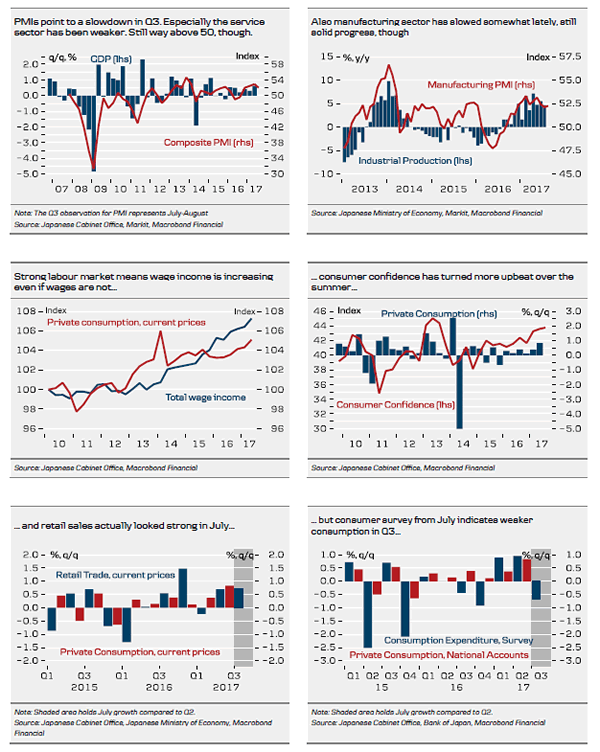 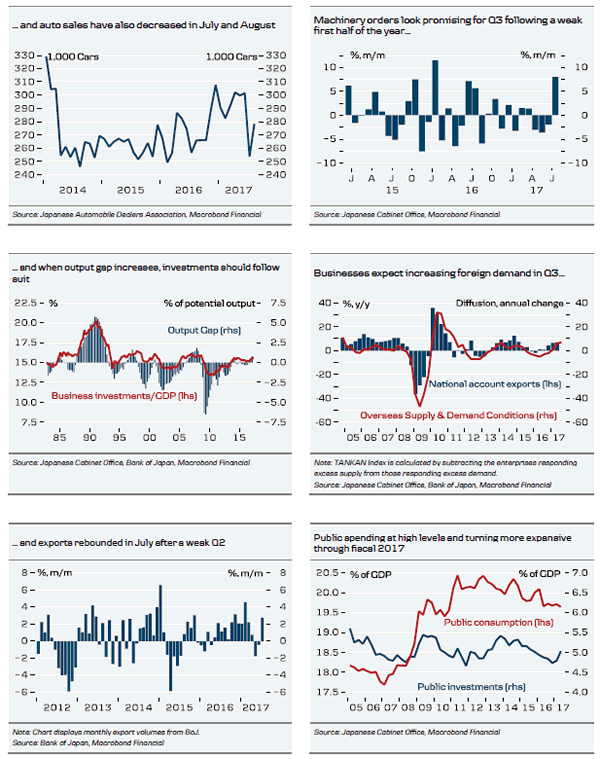