Retail sales increased just 0.3% in November; less than half of the expected gain. Holiday sales are still on track to post a record for the year, but with spending slowing in the final months, it is not the finish retailers were hoping for. Consumers are no longer the price-takers they were when they were flush with cash from stimulus checks; higher prices for gas and food is taking away wallet share from other spending categories.

Retail sales rose just 0.3% in November, which was less than half the consensus estimate that was calling for a 0.8% gain. The main story in the November is that higher prices for non-discretionary items, like food and gas, are forcing hard choices for consumers in other areas this holiday season. There is also reason to believe holiday sales were pulled forward to get ahead of supply chain snarls that left retailers worried and consumers frantic to secure their gifts in time for the holidays.

The underlying details of November sales were mixed among retailers. The largest declines came from holiday-sensitive categories, like electronics & appliances (-4.6%) and department store sales (-5.4%), which both saw the fastest decline in sales in nine months. Other categories eked out modest gains during the month. But control group sales, which excludes autos, building materials, gasoline and restaurant sales and is a reliable gauge for goods spending in the GDP accounts, declined 0.1%.

Record Gain in Holiday Sales, but Limping Across the Finish Line

In our September forecast for Holiday sales this year we established a range of 10-13%, a figure which would have handily exceeded any year since at least 1992. While we took some heat for such an optimistic forecast at the time, holiday sales are now on track to handily exceed the top end of our range. Factoring in today’s sales numbers through November, even if sales were flat in December, holiday sales would come in at 14.6% for 2021.

That said, we would not rule out some giveback in December. With well-publicized supply-chain issues and aggressive messaging from retailers, shoppers have largely heeded the advice to shop early. The risk is that all that early shopping pulled forward trips that in other years would have happened in December, setting us up for a decline. It is not just pulled-forward demand either. If stores are out of key merchandise, holiday gift cards might take the place of gifts; since those get counted for retail sales when they are redeemed, that could push some spending into January.

The one thing everyone is getting this holiday season is inflation, our measure of real holiday sales showed a decline of 0.5% in November⁠—which puts real holiday sales on track to rise roughly 10%. However once things shake out, the nominal year-over-year gain will likely be four to five percentage points higher thanks to inflation. 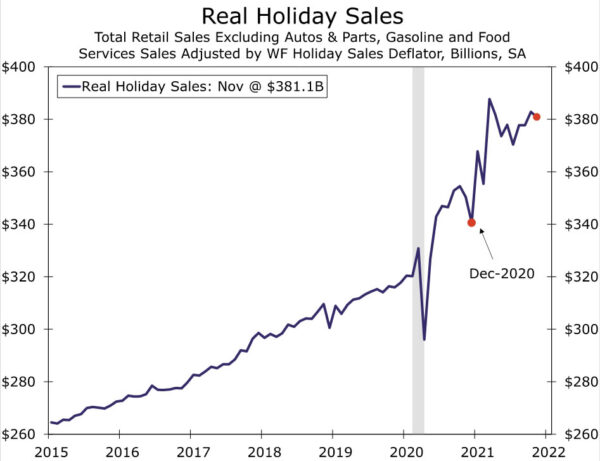 As we’ve cautioned in recent months, prices are certainly a factor boosting the retail sales estimates. Since sales are reported in nominal dollars they are not adjusted for inflation. This is perhaps most evident in the 1.7% jump in gasoline station sales for November, which was the largest gain of any retailer. Last week we learned consumer prices for gasoline surged another 6.1% during the month, which suggests consumers aren’t purchasing more gasoline but simply paying more at the pump. Grocery sales is another example of a price-related boost. Sales rose a solid 1.3% during the month, but that’s in the context of another 0.8% gain in consumer prices of food at home. Price gains in these non-discretionary goods are forcing hard choices in other areas.

Consumers are not just facing higher prices of goods, but services prices have also started to pick up in recent months creating an inflation challenge for consumers as they try to normalize spending. On top of higher prices, the Omicron variant presents some risk to spending, particularly in services where consumer sensitivity around COVID has largely been concentrated.

At this point, health officials are only beginning to understand the threat from the Omicron variant. Since retail sales tends to be more goods-related, it does not present a clear read on how consumers are adjusting spending patterns. We’ve seen a slight pullback in some high-frequency measures of services activity like diner reservations via OpenTable, the amount of people passing through TSA checkpoints and hotel occupancy. But since these data are not seasonally adjusted, some of this weakness can be attributed to payback after the Thanksgiving rush. We’ll get a cleaner read on services consumption when the personal income & spending data for November are released next week. 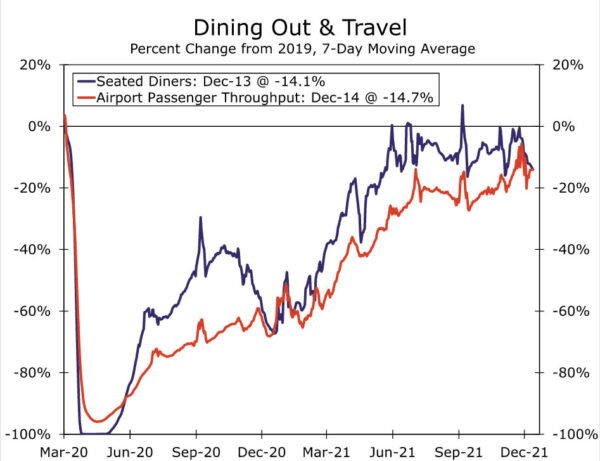