The Bank of Canada’s Q4 Business Outlook Survey was conducted largely before the spread of the new Omicron variant accelerated sharply in December. But business capacity pressures were also rapidly accelerating late last year. The pace of expected future sales growth remained high, although the pace was little changed versus a quarter earlier. But ability-to-produce to fill incoming orders looks clearly to have been a larger problem than any shortfall in orders. Almost 80% of businesses reported they would have difficulty meeting an unexpected increase in Demand. Plans to invest are widespread, with the net share of firms planning to buy more machinery and equipment over the next 12 months hitting a record high. The net balance of firms planning to hire workers hit a record 77%, and businesses expect that very tight labour markets (the unemployment rate was back below 6% in December) means they will have to pay more to accomplish that goal. A net 71% of businesses expect to have to pay higher wages – mostly to retain and attract new workers. Two-thirds of businesses expect the annual rate of inflation to be above the top-end of the Bank of Canada’s 1%-3% target range over the next two year, up from 45% in the Q3 survey.

The rapid spread of the Omicron variant and large numbers of workers required to self-isolate are likely only adding to labour shortages in the near-term. The economic impact of the latest virus wave will very likely push unemployment back up in January, but disruptions will also likely be short-lived given the exceptionally rapid initial virus spread and accelerated roll-out of booster shots. Government supports will once again help to keep a floor under household and business incomes. As a result, we don’t expect the Omicron variant to delay Bank of Canada rate hikes. Our forecast assumes the first increase in the overnight rate will come in April, although capacity/inflation/wage pressures in today’s BOS data would argue that the first increase could come at any time, including in the next policy decision later this month. 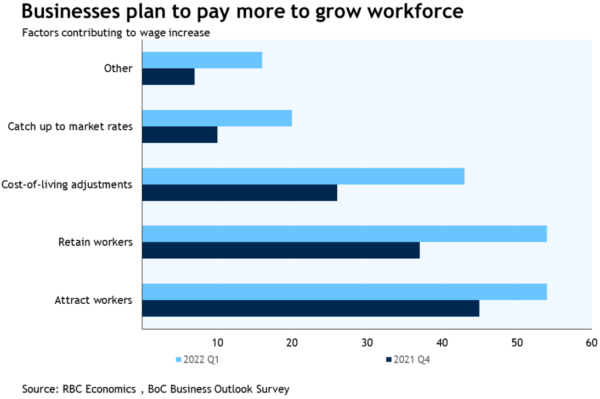 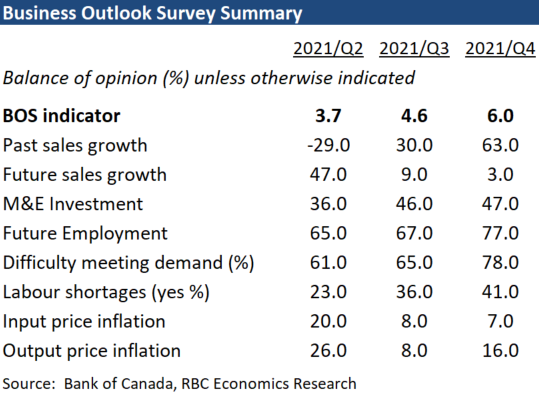