You Take the High Road…

U.K. data releases since the start of this year have offered further insight into increasingly divergent economic trends. On the price front, the December CPI showed that inflation continues to quicken and, indeed, surprise to the upside. Headline inflation firmed more than expected to 5.4% year-over-year, while the core CPI unexpectedly quickened to 4.2%. Survey data indicate that price pressures will persist for the time being, with the input and output price components of the PMI surveys remaining near record highs. However, in the manufacturing sector, an improvement in supplier delivery times at least hints at some easing in supply disruptions. 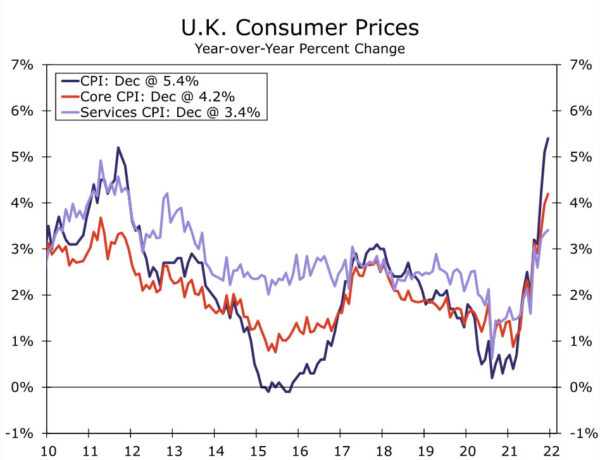 Another factor which points to elevated inflation continuing in the near-term is another increase in electricity prices scheduled for April this year. Higher prices for gas and electricity have been important drivers of faster U.K. inflation, with December year-over-year increases of 28.1% and 18.8%, respectively. In contrast, services CPI inflation, while not exactly tame, rose a lesser 3.4% in December. Still with the looming April electricity price rise, the overall rate of U.K. CPI inflation is likely to climb into a 6.5% to 7% range. Even if a significant portion of the spike of U.K. inflation is energy-driven, overall price increases of that magnitude will clearly warrant and necessitate further policy rate increases from the Bank of England, with the main question being the timing and speed of those central bank rate hikes. 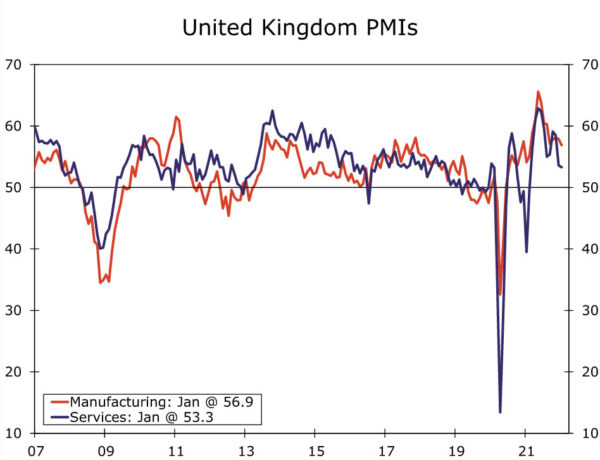 …And I’ll Take the Low Road

With respect to the pace of monetary tightening, we believe the other significant U.K. trend—that of slower activity growth—will be consequential in seeing the Bank of England deliver only a gradual pace of interest rate increases during 2022. The U.K. economy had displayed decent momentum until late last year, with November GDP for example rising by 0.9% month-over-month. However, as COVID cases surged during December, prompting the imposition of some modest restrictions and voluntary caution on the part of consumers, activity softened markedly around the turn of the year. Most notably, retail sales slumped 3.7% month-over-month in December. Early this year the January manufacturing and service sector PMIs fell further, to 56.9 and 53.3, respectively.

While it is true any COVID induced slowdown in the economy will likely be short-lived, with cases having receded in recent weeks, the looming increase in electricity prices will also weigh on consumer purchasing power, and should also be a headwind for the economy in the months ahead. As a result, we believe the outlook remains for somewhat uneven and relatively moderate U.K. economic growth in 2022. We forecast GDP growth of 4.1% for 2022, down from an estimated 7.1% in 2021, though we believe the risks around that growth outlook remain tilted to the downside.

Should the Bank of England follow the gradual path we suggest, it should see the GBP/USD exchange rate come under pressure over time. An “on hold” decision from the Bank of England in February would disappoint relative to expectations from market participants, which have almost fully priced in a 25 bps rate hike for February. Moreover, the 50 bps of policy rate increase we forecast from the Bank of England over the next 12 months compares to market expectations for 113 bps of policy rate increase over that period. This more gradual view of Bank of England tightening is an important influence behind our forecast for a softening in the GBP/USD exchange rate towards $1.2900 by the end of 2022, and to $1.2700 by the middle of 2023. 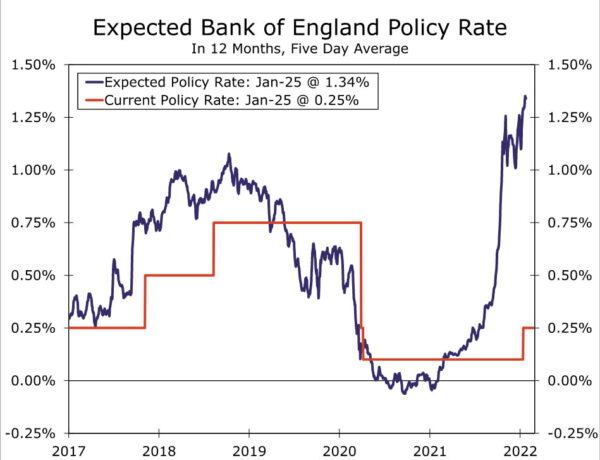