Following the previous week’s big drop in US stock markets, we saw some very volatile price action as dip buyers initially took advantage of downbeat stock prices, before being overpowered by the bears once again. As we got closer to the end of the week, the major indices were holding deep in the negative territory. Even strong earnings result from Apple couldn’t help to lift sentiment, as inflation and tightening concerns exacerbated by surging oil prices and a hawkish Federal Reserve. Investors are starting to look ahead to the first week of February, when the economic calendar is filled with top-tier macro data, including US nonfarm payrolls, a couple of central bank meetings – namely the ECB and BoE – and plenty more US earnings, featuring the likes of Alphabet, Amazon and Meta. A week-long spring festival in China means the markets will be closed there.

Tech stocks to remain in focus 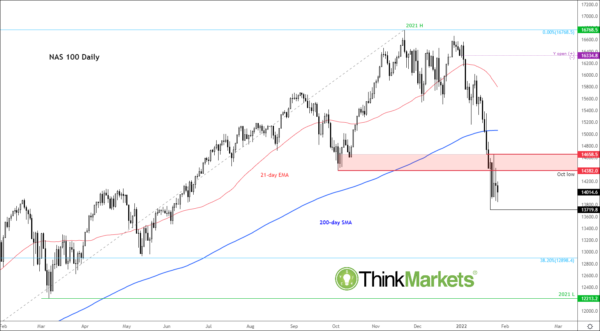 The focus will clearly remain on the stock market, especially the still-expensive technology sector. Powell has already admitted the Fed has been behind the curve and now must get its act together to get inflation to more acceptable levels. If that means upsetting financial markets, then so be it. So, expect to see further volatility for technology stocks in the week ahead, if incoming data points to a sustained period of high inflation and/or stronger growth. If we assume that stimulus and low rates were among the major reasons behind the protracted bull run, then that support is no longer there or at least not in the same way. Value stocks – those in the financial sector and industrials – must now do the heavy lifting. But if those big tech stocks continue to struggle – and we have plenty more earnings to come in the week ahead from the tech sector – then it is hard to imagine the S&P 500 remaining at current levels for too long. The correction could extend further, and we might be in for more volatile price action in February.

As far as the US dollar is concerned, well it is likely to remain supported against commodity currencies for as long as risk sentiment remains sour. There is an outside chance that the Japanese yen might come back strongly if the stock market turmoil continues, amid haven demand. In the week ahead, we will get policy updates from the likes of RBA, BoE and ECB.  We will also have the latest monthly employment reports from the US, Canada and NZ. So, there are lots to look forward to for FX traders.

While the ECB and RBA are unlikely to make policy changes, the Bank of England is expected to hike interest rates 25 basis points on Thursday, as it looks to tighten policy for the second time in less than two months. The BoE, like many other central banks, has started to reverse more of its pandemic

Economic and data highlights for the week ahead