The Weekly Bottom Line: All About Inflation and Geopolitics

U.S. – All About Inflation and Geopolitics

The week started off on a ‘lovely’ note, but the high cost of roses – a fairly inelastic good on Valentine’s Day – is likely to have reminded the average consumer once again of the strong inflationary pressures the country is facing. Concerns regarding high inflation, together with rising geopolitical (Ukraine-Russia) tensions added to equity market volatility.

On inflation, minutes from the January 25-26 Federal Open Market Committee (FOMC) meeting showed growing concern over elevated inflation. From our lens, there is no longer a question of whether the Fed will hike rates soon, but by how much. On this front, most participants believed a faster pace of hikes than that of the post-2015 period would likely be warranted this time around. In this vein, St. Louis Fed President Bullard, reiterated this week that without swift Fed action, inflation may become an even more serious problem. Bullard has advocated for the front-loading of rate hikes, calling for a cumulative full percentage point hike over the next three meetings. Market odds were in tune with some front-loading last week, briefly tilting towards a 50-basis point hike in March, but have since cooled.

The Fed’s hiking pace will ultimately be heavily dependent on how the economy and especially interest rate sensitive sectors, such as housing, respond to higher rates. A series of data reports this week drove in the point that the economy started 2022 on decent footing. Retail sales surged 3.8% month-to-month in January, well above the market consensus forecast for a 2.0% print. Driving the gains were higher receipts at auto & parts dealers (5.7%) and non-store retailers (+14.5%). The latter, a proxy for online sales, is likely to have benefitted from a surge in infections last month.

Homebuilding activity, meanwhile, had a soft start to the year, with housing starts falling 4.1% (m/m) in January. Judging by the many obstacles that builders face, such as material and labor shortages, this result isn’t entirely unwarranted. Rising absenteeism among infected workers during January’s Omicron wave is also likely to have weighed on the pace of new construction. Yet, it’s important to not lose the forest for the trees. On a trend basis, homebuilding activity remains near the highest level since 2006, while homebuilder confidence remains near its highest level on record (Chart 1). 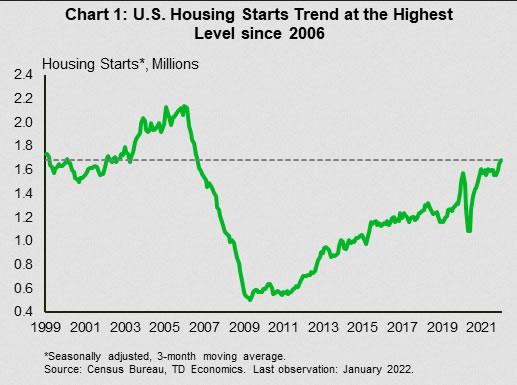 The severe housing supply shortage is supporting builder optimism and new residential construction activity. Existing home sales surged 6.7% (m/m) in January, defying market expectations for a decline. This strong sales pace bit into inventories, sinking them to the lowest level on record (Chart 2). The imbalance is likely to keep builders busy for quite some time. January’s strong showing also likely represents some pull-forward in activity with homebuyers trying to get ahead of higher mortgage rates. This may come at the expense of a slower sales pace later in the year. The intuition of higher rates, however, has proven correct, with average 30-year mortgage rates surging to around 4% in recent weeks. As the Fed pulls away from ultra-loose monetary policy, higher rates will weigh on affordability, which will take some additional steam out of demand. This is but one reason as to why the Fed’s hiking pace will bear careful watching. 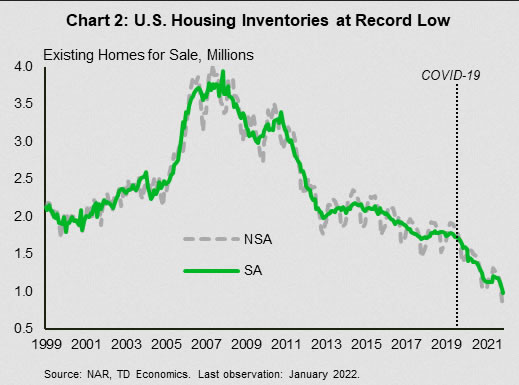 As is well known, Canadian home prices have been on a significant upward trajectory during the pandemic. However, this narrative went to a whole new level this week, as data for January showed a near 7% m/m gain in average home prices. Excluding the brief period in early 2020 when activity and prices were bouncing back from lockdown, this marked the bubbliest monthly rise since 1989 (Chart 1). Notably, prices rose across all provinces. In the GTA (the nations’ largest market), prices increased at their fastest pace since early 2017, when the region was arguably in the grips of a speculative bubble. Upward price pressure is likely to have some staying power, as the months’ supply of properties remained at an historic low. 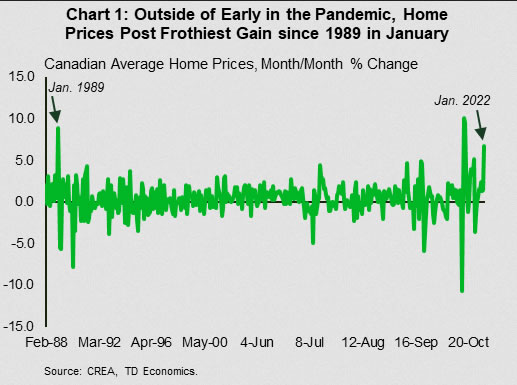 Rising prices erode housing affordability, and this worsening backdrop has made it tougher for first-time homebuyers to jump into the market. Bank of Canada data released last month drives this point home, as it shows the share of purchases accounted for by first-time homebuyers falling to 47% as of mid-June last year, versus 53% in early 2015. At the same time, the share of home purchases made by investors is on the rise, climbing to about 21% from 19% before the pandemic struck. If price growth continues at these frothy rates, these trends could continue. Or in a worst-case scenario, investors suddenly leave the market and prices adjust downward very quickly.

Home prices weren’t the only high-profile price data released this week. Consumer price inflation also ran hotter than what the market was expecting in January, with the headline rate touching 5.1% year-on-year. Seasonally adjusted prices up were up a robust 0.6% month-on-month and every category saw gains well above their recent historic norms. Core inflation measures also ticked higher, and inflation is broadening out across categories (Chart 2). The picture may not be much better for this month either, as oil prices have shot higher amid geopolitical uncertainties, despite some reversal this week. What’s more, blockades (most notably at the Ambassador Bridge, which was resolved this week) have added further strain to supply chains. 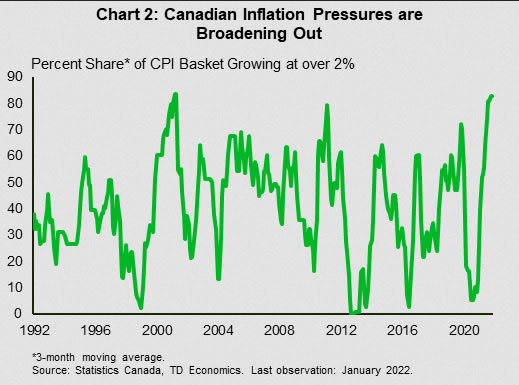 All in, these data points served to reinforce (and amplify) the narrative that rates are going to be moving higher, beginning in early March. How much higher is a matter of some debate. For their part, markets are pricing in nearly seven hikes by end of this year. The forecast we put out last month envisioned a slower pace, with six rate hikes taking place from March through the first half of next year. This would take the overnight rate to 1.75%, where it last sat before the pandemic hit. However, if inflation turns out to be a tougher nut to crack, policymakers may be forced to push the rate even higher than this level.