USDCHF Retreats ahead of the Swiss National Bank Decision

The US dollar retreated slightly after relatively weak new home sales data from the country. Data showed that new home sales declined from 788k in January to 772k in February. These numbers were weaker than the median estimate of over 810k. Still, the American housing sector is still strong, with home prices hovering near their all-time high. The dollar also declined after the latest statement by Jerome Powell. In a speech, he said that the economy was doing well and reiterated that the Fed will do whatever it takes to lower the current wave of inflation. The currency will react to important economic numbers like the American durable goods orders and initial jobless claims data. Also to several Fed officials like Chicago’s Charles Evans and Christopher Waller.

The Swiss franc moved sideways in the morning session as investors waited for the upcoming interest rate decision by the SNB. The decision comes at a time when the Swiss franc has strengthened significantly against the euro. Therefore, analysts expect the data to show that the SNB will leave interest rates unchanged at -0.75% where they have been for years. The bank is also expected to reiterate its views that the currency is significantly overvalued against its peers. The Swiss economy is doing modestly well, with inflation being significantly lower than in most countries. Its unemployment rate has also remained at historical lows.

The price of crude oil jumped to the highest point in weeks after the latest inventory numbers from the US. According to the Energy Information Administration (EIA), the country’s inventories declined by more than 2.5 million barrels last week. That was a significant drawdown considering that inventories jumped by more than 4.35 million barrels in the previous week. There are also concerns about Russia’s oil and gas supplies as the crisis in Ukraine escalates. While Russia’s oil and gas sector has not been sanctioned, it is estimated that many traders will avoid buying from the country. The key events to watch today will be the Mexican and South African central banks and flash PMIs.

The XBRUSD pair maintained its bullish trend after the latest American inventories numbers. It rose to a high of 118.21, which was the highest level since March 9th. On the four-hour chart, the pair moved above the 25-day and 50-day moving averages. The Stochastic oscillator and the Commodity Channel Index (CCI) have moved to the overbought level. Therefore, there is a likelihood that the pair will likely keep rising as bulls target the next key resistance at 120. 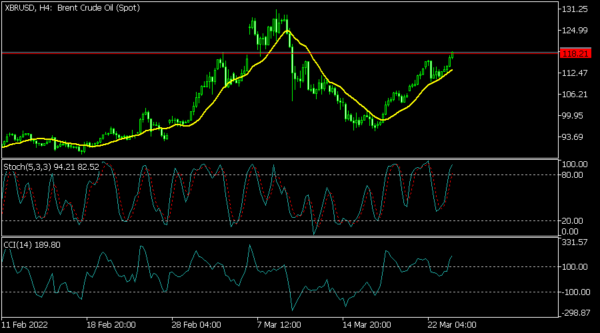 The EURUSD pair remained under pressure after the latest statement by Jerome Powell and the latest new home sales numbers. On the four-hour chart, the pair moved slightly below the ascending trendline shown in yellow and slightly below the 25-day moving average. It has also formed a head and shoulders pattern. Therefore, the pair will likely break out lower today. 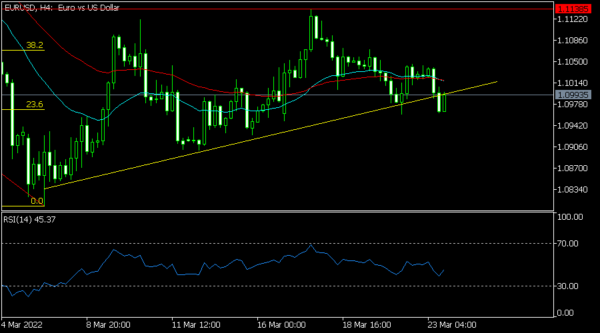 The USDCHF pair declined slightly ahead of the latest interest rate decision by the Swiss National Bank (SNB). It moved to a low of 0.9325, which is lower than the intra-week high of 0.9375. It moved below the middle line of the Bollinger Bands while the MACD is below the neutral line. Therefore, the pair will likely have a bearish breakout after the SNB decision. 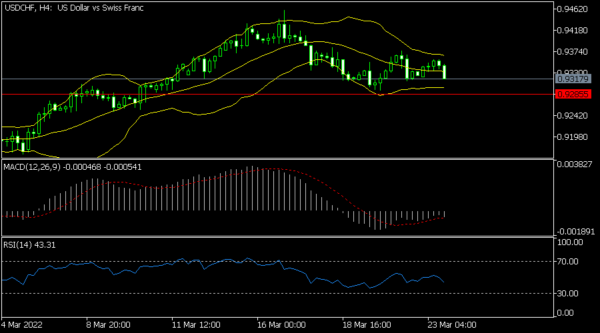