The Eurozone economy has had an unsettled start to 2022. A surge in COVID cases around the turn of the year weighed temporarily on activity across the region, as Eurozone December retail sales slumped 2.1% month-over-month in December before staging a modest rebound early this year with a cumulative 0.4% gain in sales during the January-February period. Meanwhile, the Eurozone services PMI fell to a low of 51.1 in January, but has rebounded somewhat since. After having navigated a COVID-induced slowdown in activity, Europe was then faced with uncertainties stemming from the Russian invasion of Ukraine in late February. In addition to restraining Eurozone consumer confidence, which fell sharply to -18.7 in March, Europe’s reliance on Russia as a source for oil and gas imports adds uncertainty to the outlook. 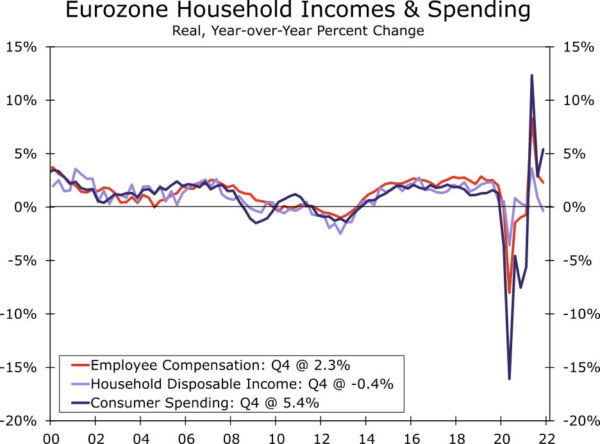 While those Ukraine-related uncertainties are likely to have a negative impact on the Eurozone economy, export exposures for the Eurozone to Russia are very modest, and ultimately we anticipate that any direct negative growth impact from the Ukraine crisis will be limited. That said, the recent COVID and Ukraine uncertainties compound an already softening backdrop for the region’s consumer sector and thus could, in our view, contribute to a moderately softer growth outlook than previously. Recently released data from the Eurostat statistical agency and European Central Bank (ECB) indicate that, in nominal terms, Eurozone household disposable income fell 1.4% quarter-over-quarter in Q4-2020, but was still up 3.4% year-over-year. However, after adjusting for inflation, Eurozone real household disposable income was actually down 0.4% year-over-year. And importantly, the household savings rate also declined to 13.3% of household disposable income in Q4-2020, only slightly above levels that prevailed prior to the pandemic. Real consumer spending had already begun to lose some momentum by late last year with a decline of 0.6% quarter-over-quarter in Q4. Looking ahead, even with the accumulation of excess savings during the pandemic which can now potentially be deployed, the slower growth in household incomes and falling savings rate does suggest the Eurozone consumer will provide less of an impulse to the economy moving forward. 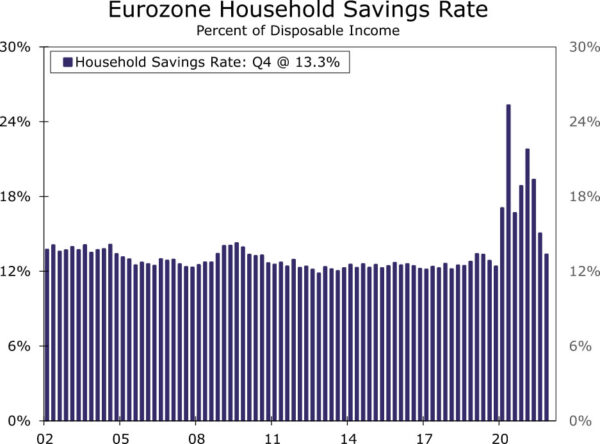 Meanwhile, from a business perspective, it’s possible the Eurozone corporate sector could provide the economy with a modest cushion against an excessive slowdown. The same Eurostat and ECB data indicate that net entrepreneurial income for Eurozone non-financial corporates grew 17.0% year-over-year in Q4-2020, stronger than the 11.9% increase in Q3, and a faster pace of profit growth than generally prevailed in the several years prior to the pandemic. Should profit growth be sustained at respectable levels—which remains an open question—that could provide some support to investment spending across the region. However, even the investment outlook faces some uncertainties. Supply disruptions and increasing costs have the potential to weigh on Eurozone profit growth going forward. And of course from a mathematical point of view, consumer spending comprises a far larger portion of the Eurozone economy than does investment spending. At best, we expect investment spending would offer only a partial cushion for the Eurozone growth outlook. Accordingly, we have revised our outlook for Eurozone GDP growth outlook modestly lower, and now forecast GDP growth of 3.1% for 2022, slowing to GDP growth of 2.4% for 2023.

In contrast to the slowing growth trends, incoming data suggest that inflationary pressures continue to intensify. The March CPI firmed more than expected to 7.5% year-over-year, driven by a 44.7% increase in energy prices. So far price pressures across the Eurozone do not appear to be as broad-based as in many other major economies, such as the United States. The core CPI, for example, firmed modestly to 3.0%, while services inflation ticked higher to 2.7%. That said, there still remains some potential for price pressures to spill over to other areas. Unfavorable base effects suggest a further quickening of core inflation is likely, while the elevated input and output price components of the Eurozone purchasing managers indices also hint at potentially more widespread price gains moving forward. Moreover, even absent any acceleration in core inflation trends, energy prices appear likely to remain elevated for some time. As a result, headline inflation is also likely to continue running at a rapid pace. Given the March CPI outcome, and considering these inflationary pressures, we now see a faster average pace of inflation for 2022 of 6.4%. 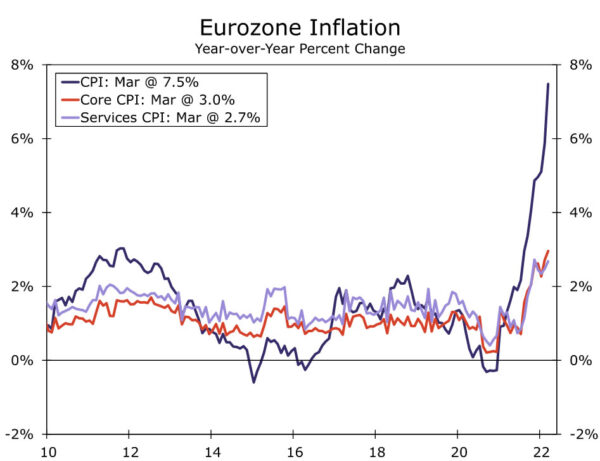 We believe the accelerated pace of headline inflation will also have implications for the path of European Central Bank monetary policy. While monetary policymakers often tend to focus on core CPI measures as an indication of underlying inflation trends, the fact that energy prices and thus headline inflation could remain elevated for an extended period, even without a broadening of price pressures, could in our view prompt the European Central Bank to respond. Indeed, in the wake of recent developments, we now expect earlier and more rapid monetary tightening (and specifically Deposit Rate increases) from the ECB than previously. Our outlook for the ECB to end its quantitative easing program by July remains unchanged. However, we now expect an initial 25 bps increase in the Deposit Rate at the September 2022 meeting (compared to our previous call for an initial rate increase in December). Beyond September, we expect a steady series of 25 bps Deposit Rate increases at the December 2022, March 2023 and June 2023 meetings, which would lift the Deposit Rate to +0.50% by the middle of next year. At that point, given moderate growth and receding inflation, we believe the ECB may pause its rate hikes through the second half of 2023 to assess the impact of its actions, before likely resuming monetary tightening in 2024. That said, we do see the risks are tilted towards continued tightening, meaning the Deposit Rate could end 2023 at a higher level than we currently forecast. 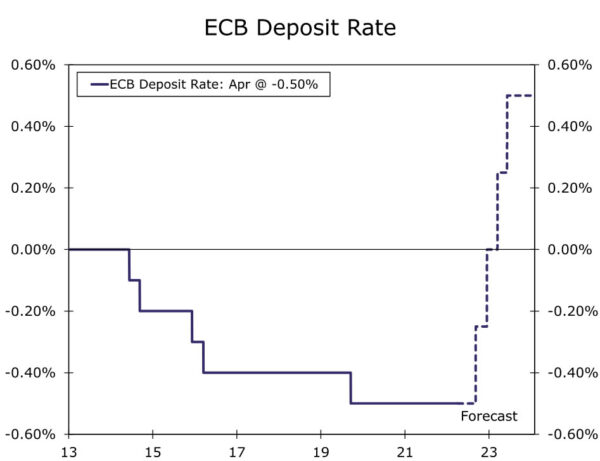