Consumer prices continued to charge higher in the early part of the years, rising by 1.8% in the March quarter. Coming on top of the large price increases we saw last year, that took the annual inflation rate to a three decade high of 6.9% (up from 5.9% at the end of last year).

The March quarter inflation figures were a touch lower than our forecast for a 1.9% rise and the average market forecast. However, the surprise was small, falling well within the range of analysts’ expectations. 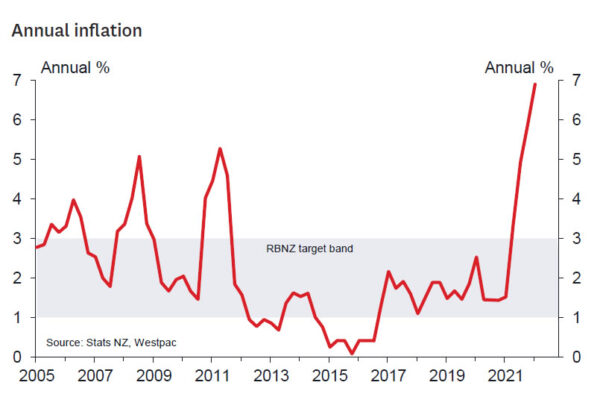 Much of the sharp rise in consumer prices in recent months has been due to large increases in the prices of food and petrol. However, the high level of inflation isn’t just due to a few specific items. Price pressures are bubbling over in every corner of the economy.

In part that’s due to global factors including ongoing disruptions to supply chains and high transport costs. Those pressures were reflected in the 8.5% annual rise in tradables prices (which mainly relates to the prices of imported goods).

At the same time, domestic inflation pressures are also running hot, with non-tradables inflation rising to 6% over the past year. New Zealand businesses have been reporting sharp increases in operating costs. That includes mounting upward pressure on wages as businesses struggle to attract and retain staff.

Compounding those cost pressures has been strong domestic demand in some key parts of the local economy. That’s given businesses in sectors like construction greater scope to pass on cost increases into output prices, rather than taking a hit on margins.

The combination of those demand and supply pressures has resulted in strong and widespread price increases across the New Zealand economy. That was reflected in the suite of core inflation measures released by Stats NZ today, which smooth through quarter-to-quarter swings in prices and track the underlying trend in inflation. In fact, excluding food and energy costs, consumer prices are still up 5.9% over the past 12 months. 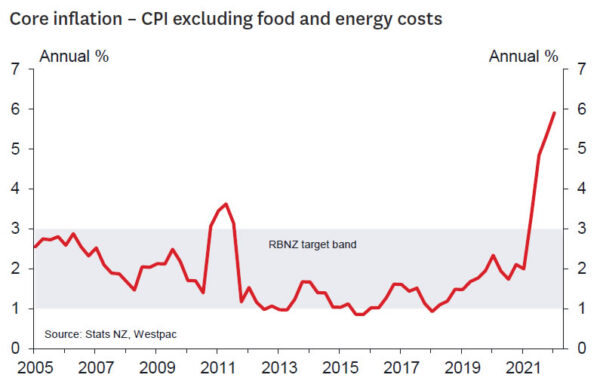 Given the prevalence of price and cost pressures, we expect inflation will remain elevated for some time yet. However, it’s looking likely that the March quarter will prove to be the peak in the current inflation upswing. Over the past year we saw a rapid increase in cost pressures, including a doubling in international oil prices. We also saw large increases in the prices for a wide range of consumer goods and productive inputs as the global economy emerged from the initial Covid outbreak. Now, although inflation pressures are still rampant, much of those earlier very large increases in operating costs have already been passed into output prices. Consistent with that, the March quarter saw smaller than expected increases in the prices for a number of household durable items, such as appliances.

What does today’s result mean for the RBNZ?

While a touch softer than we expected, today’s result supports our expectations for a series of further rate hikes from the RBNZ over the coming months. We’re forecasting a 50bp rise in the OCR at the RBNZ’s May policy meeting, followed by 25bp increases at every meeting in the back half of the year.

Inflation is expected to remain above the RBNZ’s target band through the remainder of 2022. And although much of that is due to overseas cost pressures, the domestic inflation picture has also heated up.

Crucially for the RBNZ, both households and businesses are expecting that inflation will remain strong for some time yet. That’s a big concern for the central bank, as if that spills over into wage and price setting decisions, the strength in inflation could be sustained for even longer. That would mean that even larger interest rate increases are needed to rein the inflation monster in. On this front, it’s notable that we’re already seeing growing upwards pressure on wage claims.

Concerns about inflation expectations saw the RBNZ swing into action at its recent policy meeting with a 50bp increase in the cash rate. Today’s strong inflation result will have done nothing to alleviate those concerns. 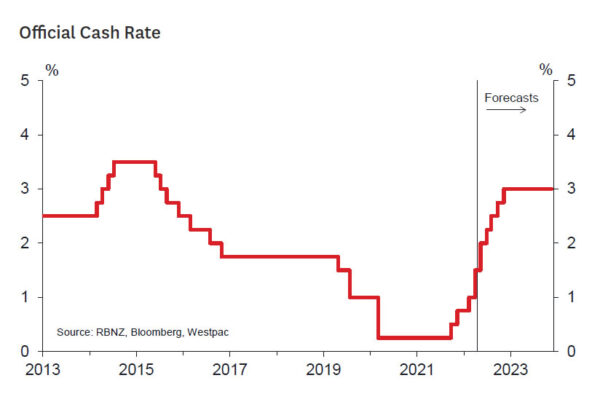 A closer look at the numbers.

The March quarter saw particularly large price increases in a number of areas.

The past three months also saw further large increases in housing costs. Much of that was related to the cost of purchasing a newly built home, which rose by 3.5% in the March quarter. That followed similarly large increases in recent quarters, with construction costs up a massive 18% over the past year.

Adding to the pressure on housing costs, rents have been rising rapidly, with an increase of around 1.1% in the March quarter.

Petrol prices have also risen strongly in recent months as the conflict in Ukraine has intensified. That saw local pump prices hitting record highs in March. And while the reduction in fuel taxes may have blunted some of the pain, prices over the March quarter as a whole were still around 9% higher than at the end of 2021. That’s also adding to inflation more generally due to the related rise in transport and operating costs.

Finally, March quarter inflation was also boosted by the annual increase in tobacco excise taxes. That saw the prices for cigarettes and tobacco rising by 4.2%.

Providing a partial offset to the strong rises in other prices, domestic airfares fell 19% following the country’s shift out of the Delta lockdown in late 2021. Both domestic and international airfares are likely to remain volatile for some time as travel patterns continue to adjust to changes in health restrictions. 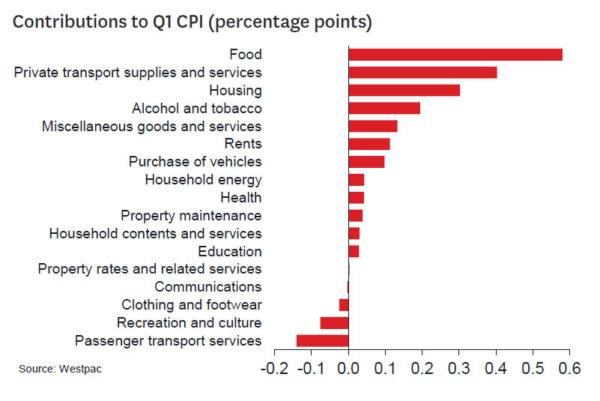