American equities dropped sharply on Friday as concerns about the Federal Reserve escalated. The Dow Jones and S&P 500 indices had one of the worst days this year after Jerome Powell warned that the bank will continue its aggressive rate hike policy. This will involve more rate hikes and even quantitative tightening. Investors are also worried about margin pressure as the ongoing earnings season continued. Data compiled by FactSet showed that 20% of all companies have published. Of these firms, 79% have reported a positive EPS surprise while 69% have published a positive revenue surprise. The 12-month forward PE ratio of the S&P 500 has moved to 18.6.

The British pound retreated to the lowest level since 2020 over concerns about the next actions of the Bank of England. Investors believe that the BOE will pause its rate hikes and embrace a more dovish tone considering that the economy is slowing. This was evidenced by the fact that consumer confidence has crashed to the lowest level since 2008. According to Gfk, confidence crashed minus 7 points to -38 in April as concerns about inflation rose. Further data showed that revealed that retail sales crashed hard in March.

The euro declined on Monday morning as investors focused on the outcome of the French election. Results between Marine Le Pen and Emmanuel Macron showed that the incumbent took a strong lead. He won 58% of the total vote even as voter turnout remained weak. He also becomes the first French president to be reelected in 20 years. Therefore, this means fears of France being led by a far-right leader. As a result, analysts expect that status quo in Europe will continue. The key data to watch will be the latest German current assessment and business climate data. Their impact on the euro will be relatively minimal.

The Nasdaq 100 index declined sharply over concerns about rising interest rates. It dropped to a low of $13,318, which was the lowest level since March 21st. It has moved to the lower side of the Bollinger Bands and below the 23.6% Fibonacci retracement level. It has also moved below the 23.6% Fibonacci retracement level and while the Relative Strength Index (RSI) has pointed downwards. Therefore, the index will likely keep falling in the near term. 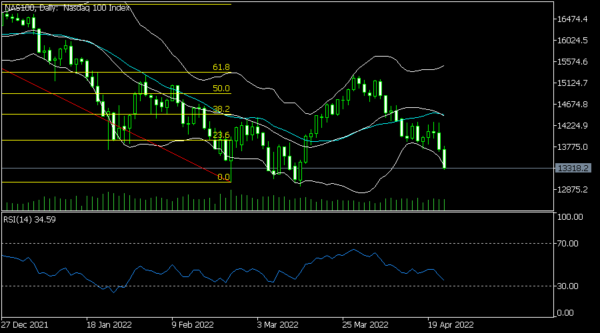 The GBPUSD pair continued the bearish trend after the weak economic data from the UK. The pair is trading at 1.2831, which is significantly lower than the key resistance at 1.300. On the four-hour chart, it moved below the descending triangle pattern. It has also moved below the 25-day and 50-day moving averages while the Stochastic oscillator and the momentum have pointed lower. The pair will likely have a relief rally today. 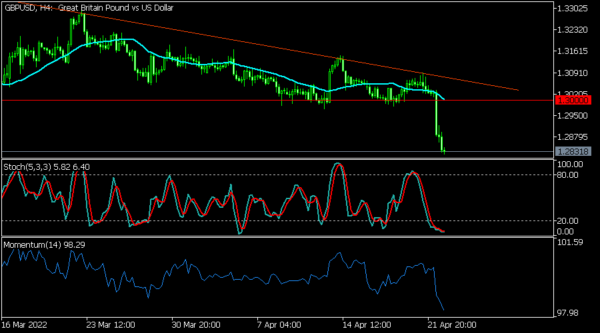 The EURUSD pair remained under pressure as investors reflected on the French election. It is trading at 1.0796, which is between the middle and lower lines of the Bollinger Bands while the Stochastic oscillator has moved above the oversold level. The pair is also below the 25-day moving average. The pair will likely remain in this range today. 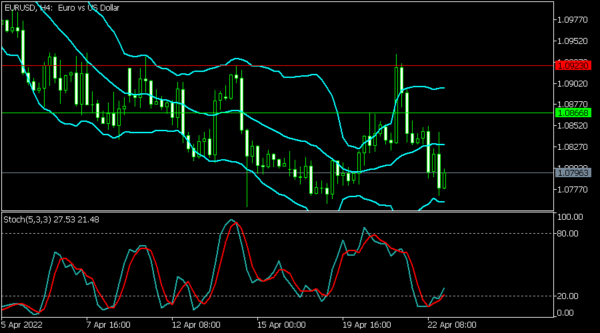