The Bank of England will review its policy and update its economic projections on Thursday, a day after the Fed, with the announcement scheduled for release at 12:00 GMT. A rate hike is already baked in, but what is still uncertain is how aggressive the central bank is planning to be as the toxic mix of heating inflation and slowing economic growth is making any decision in either direction risky to take.

BoE the only player in town amid stagflation fears

Operating on a slim fiscal budget, the British Prime Minister, Boris Johnson, clearly stated that government spending will not be enough to offset the rising living cost immediately for everyone besides the unfortunate families. In particular, he explained that increasing financial support could fuel more inflation at a time when consumers are already facing higher taxes and mounting energy bills. Therefore, the central bank will probably be the only player in town in the short term, aiming to cool inflation before the economy erodes it because of a slowdown, or in other words before it gets trapped in stagflation.

But the job will not be easy. Unlike the Fed, the BoE has adopted a careful approach over its tightening era, expressing unease particularly about faster rate increases even though inflation hit a new three-decade high of 7.0%y/y in March and could run even higher later in the year according to the BoE’s previous projections. Exacerbating inflation expectations is probably the last thing policymakers would like to cause through a quick stimulus reduction as the series of higher highs in bond yields show no signs of abating, with the 10-year yield topping recently at a seven-year high marginally above 2.0%. The higher the yields rise, the larger borrowing costs become for businesses, and therefore the bigger the risk of an economic slowdown. Note that the negative yield curve reversal is relatively steeper in the UK than in the US, while the one for the Eurozone is interestingly flat – a yield curve inversion is a signal that investors fear the economy will take a downhill turn, though it should not be taken as given. 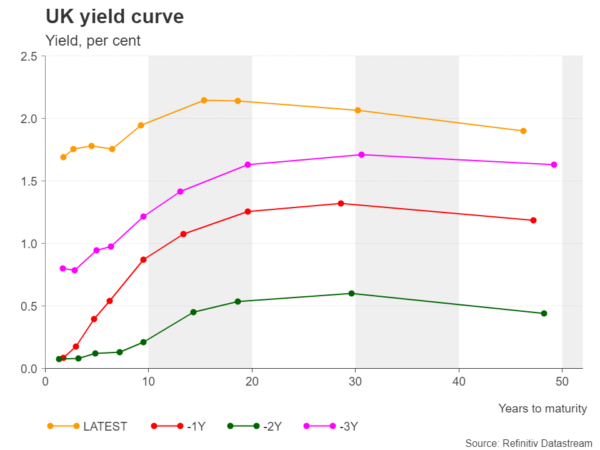 Of course, the war in Ukraine and China’s pandemic-related supply disruptions, which are the major global inflationary drivers, are out of the central bank’s control, though it would be reckless if policymakers abandon their tightening plans entirely as inflation risks are looking more real than growth risks at the moment.

Hence, the board will probably approve another rate hike this month, driving its benchmark rate to the highest since 2009, but it may refrain from sharper increases and deliver a normal one of 25 bps instead as investors widely anticipate. Such a rate hike could even be considered a moderate step compared to the 50bps rate hikes in Canada and New Zealand and therefore could still be compliant to the BoE’s April’s guidance. However, how divided the voting board will be remains to be seen. Currently investors expect eight policymakers out of nine to back a 25 bps rate hike. Besides, with the savings rate evaporating and real disposable income falling into the negative area, the economy could be more fragile against sudden financial shocks. Recall that retail sales slumped to 0.9% y/y in March from 7.2% y/y in the preceding month. Policymakers could provide some direction on the economic outlook when they unveil their new GDP and CPI inflation forecasts this week.

Another key question and perhaps the most crucial one is how the central bank will manage its 875bln pounds gilt portfolio. Policymakers had previously disclosed that they consider selling government bonds once interest rates reach 1.0% but given the current unfavorable economic backdrop and the sanctioned Russian business, the central bank may delay any quantitative tightening actions. Perhaps by announcing a consultation period, it could provide some time for thought and data examination before policymakers provide any exact details about when and how bond selling will be made.

Regarding the market reaction, futures markets are pricing a 65% probability for a 25 bps rate hike. Such a rate decision could be viewed as conservative, especially if the central bank paints a cloudier picture for the UK economy and postpones any bond selling activities. Hence, pound/dollar could slump below the 1.2410 low and continue towards 1.2312 – that being the 61.8% Fibonacci retracement of the 2020 rally. Lower, the price may stabilize around the May 2020 low of 1.2074.

In the bullish scenario where the BoE meets expectations of a normal 25 bps rate hike but sets a timetable about when and how quantitative tightening could take place, or in the most hawkish case it boosts rates by 50bps, the pair may stretch its bounce off 1.2410 and towards the former support area of 1.2670. Beyond that, the next target will be the 20-day simple moving average (SMA) and the 1.2820 level.