The second week of May carried a light economic calendar, with primary data releases continuing to center on inflation. The consumer price index (CPI) report showed that inflationary pressures eased a bit in April, falling to 8.3% year-on-year (y/y) – down from 8.5% in March (Chart 1). Base effects are likely to have played a favorable role, as price pressures stemming from supply chain disruptions began to manifest in March and April of last year. 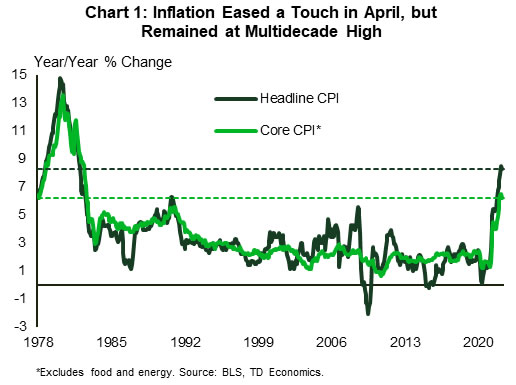 Beneath the headline, food inflation accelerated both in yearly and monthly terms, whereas energy prices eased a touch. Both, however, remain elevated at 9.4% y/y and 30.3% y/y, respectively. Excluding these two volatile categories, core prices also decelerated modestly, falling to 6.2% y/y from 6.5% y/y in March. However, several important categories bucked the trend. On the goods side, new vehicle prices were higher, while medical care, transportation, and shelter were all meaningful contributors on the services side. The transportation category was buoyed from airfares, which continued to rise sharply (18.6% m/m). Meanwhile, market-based measures of strong home price and rent growth suggest that the weighty shelter component has more upside ahead. This, together with the fact that gas prices have resumed their upward climb this month, and that we’re likely to see further upward pressure in food prices from the war in Ukraine, muddy the CPI report’s headline message that inflation may have peaked, making it prudent to wait for further confirmation to this notion.

The producer price index (PPI) report echoed a similar message to last month’s CPI numbers. Producer prices were up 11% from a year ago in April, marking an easing from an upwardly revised 11.5% y/y in March. Core PPI also eased a touch. That being said, April’s PPI showings, which are not far off from the March record highs, indicate that inflationary pressures continue to build in the production pipeline.

The small business report from the NFIB provided more of the same. In Chart 2 we can see that while the share of businesses raising (and planning to raise) average selling prices and worker compensation have eased from recent highs, they remain well above historical norms. On the other hand, the share of businesses identifying inflation as their top business problem reached a new post-1980 high in April. Another striking feature of the report is the fact that the share of small businesses expecting an improvement in the economy in the months ahead fell to a yet new record low (-50%). 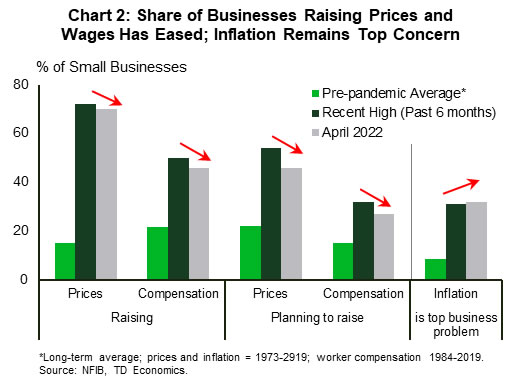 Doubtful expectations about a further improvement in the economy have some basis. Signs of a slight moderation in inflation will do little to dissuade the Fed from removing monetary stimulus expeditiously, which in turn will weigh on economic momentum. In tune with this notion, risk assets continued their downward slide this week. Despite a notable bounce back Friday, the S&P 500 is down 2.6% from last week’s close and roughly 16% from peak. Of course, as Fed Chair Powell noted this week, there’s no guarantee that the Fed will see smooth sailing in its goal to engineer a soft-landing. In a speech Thursday, Chair Powell, who was recently confirmed for a second term, noted that getting inflation back to 2% will cause “some pain”. For now, however, we’re still full ship ahead with another 50-basis point hike in June.

This was a quiet week in terms of economic data in Canada, with volatile financial markets dominating the headlines. Equity markets have been on a shaky foundation since the start of the year, and the sell-off intensified recently. The rapid pivot to tighter monetary policy combined with high oil prices and significant geopolitical risks stemming from the war in Ukraine is worrying investors. Following a brutal start of the week, market jitters finally eased on Friday and the TSX and S&P 500 managed to recover some of the lost ground, but still ended the week lower. Since the start of the year, the indexes were down 7% and 16% respectively (Chart 1). 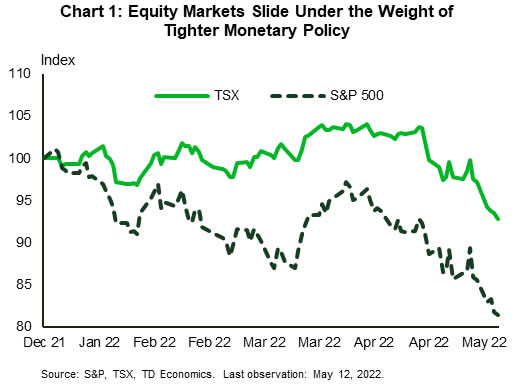 Equities are hardly the only asset class feeling the pressure. Cryptocurrencies have also been hard-hit since the start of the year underscoring reduced investors’ appetite for risky investments. In a more conventional space, home prices may also soon turn lower as higher interest rates do their job in cooling the housing market. Next weeks’ data on home sales and prices is expected to show a sizeable drop in resale activity in April and likely, for the first time in two years, a monthly drop in detached home prices.

Even as home prices ease, inflation is remaining white-hot. April’s inflation figures will also be on the docket next week. Here consumers are also unlikely to get much of a reprieve. Inflationary pressures are becoming more broad-based with services prices trending higher at the same time as consumer spending is pivoting toward services (Chart 2). 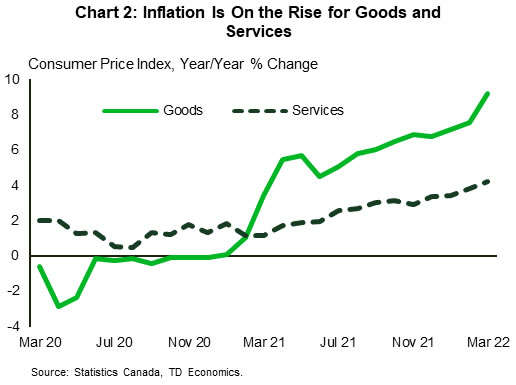 Given the worsening in affordability of Canadian housing, some moderation in prices is a welcome sign. However, the slowdown in the housing market could weigh on economic growth and consumer spending. The housing market has been a big contributor to economic growth in the last couple of years, both directly and indirectly via the positive impact of housing wealth on consumer spending. As home prices surged, the value of households’ real-estate related wealth has risen by 48% since 2019Q4, accounting for nearly 60% of overall wealth gains. As a result, with more household wealth now concentrated in real estate (40% versus 35% prior to the pandemic), the fallout from home price declines could be more painful to stomach.

The Bank of Canada isn’t worried about those headwinds yet. Indeed, in his speech the BoC deputy governor Tony Gravelle used improved household finances and the accumulation of sizeable liquid assets as an argument why the Bank might need to raise its policy rate above the neutral rate. He said that “parts of the economy may be less sensitive to rate hikes than in the past”. Indeed, as long as the labour market stays strong, headwinds emanating from higher rates, inflation and potential wealth losses will remain just headwinds rather than turning into storm for household finances.