New German Inflation Record Did Not Scare off Euro Buyers

A preliminary estimate showed that German inflation continues to pick up, reaching 7.9 y/y in May. This is a new inflation record since 1951, and the reading was also above the forecast of 7.6%.

A separate release of import prices noted an acceleration of this type of inflation from 31.2% to 31.7%. Although it was slightly lower than the expected 32.0%, this extreme reading was not only due to a jump in energy and food prices but also to a 15% fall in EURUSD over the past 12 months.

Historically, EURUSD has fallen in this way, with even more amplitude several times, but as a rule, it was during times of economic recession. Now we are seeing one of the rare instances of the single currency failing in a growing economy, which further inflates the sails of inflation. 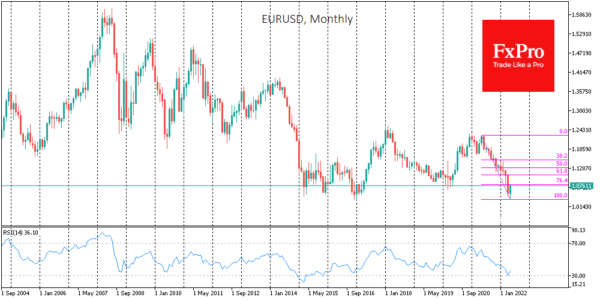 With such inputs, there remains pressure on the ECB for more dramatic monetary policy tightening measures.

Perhaps a hawkish U-turn by the European Central Bank is now the most plausible way to halt the weakening of the EURO and contain inflation.

And it seems that the ECB is just in the process of this turn, forming the basis for buying the euro against the dollar and pound after touching multi-year lows earlier in April and May.