The U.K. economy displayed resilience during the early part of 2022, but there are increasing signs a more meaningful slowdown is approaching. Indeed, given that we now see a U.S. recession as more likely than not, and with the global economic and market backdrop unsettled as well, we now also anticipate a U.K. economic recession by early 2023.

The final estimate of U.K. Q1 GDP showed a still respectable pace of economic growth of 0.8% quarter-over-quarter and 8.7% year-over-year. Within the details, consumer spending rose 0.6% quarter-over-quarter, but business investment fell 0.6%. While U.K. inflation has been on a rising trend for some months now, price growth appeared to have only a modest dampening effect on Q1 economic growth. That said, inflation pressures have intensified even further since April, with the latest round of electricity price increases now in effect. Indeed, for April alone, electricity prices jumped 40.5% month-over-month and natural gas prices jumped 68.8%. Those increases contributed to a headline inflation rate of 9.1% year-over-year as of the latest read, for May. Those energy price increases, as well as broader prices increases more generally, are increasingly expected to weigh on real household incomes and consumer purchasing power going forward. Another sizable electricity price increase is slated for October, perhaps in the region of 30%-40%, which the Bank of England estimates could lift headline CPI inflation up to, or above, 11% year-over-year. 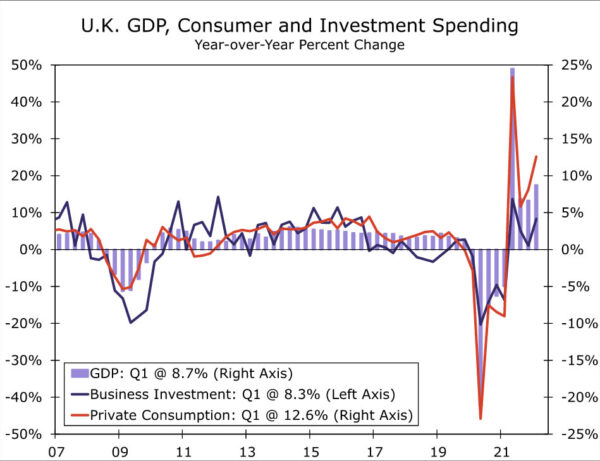 It is against this backdrop that the household income and spending trends from the first quarter GDP report were somewhat worrisome. In nominal terms household disposable income rose by 1.5% quarter-over-quarter, but that increase in nominal incomes was outstripped by higher inflation, meaning the real household disposable income dipped 0.2% quarter-over-quarter, the fourth quarter in a row that real incomes have declined on a sequential basis. As a result, real household disposable income is down 1.3% compared to Q1 2021, in contrast to a 12.6% increase in real consumer spending over the same period. Meanwhile, the household saving rate held steady at 6.8% of disposable income in Q1, which is actually slightly below the historical average that prevailed in the two decades prior to the pandemic of 7.1%. With price pressures intensifying even further over the balance of 2022, and even given some additional fiscal stimulus announced by the government in May, it seems clear that declining real household incomes will weigh even more heavily on consumer spending and overall GDP growth in the months and quarters ahead. 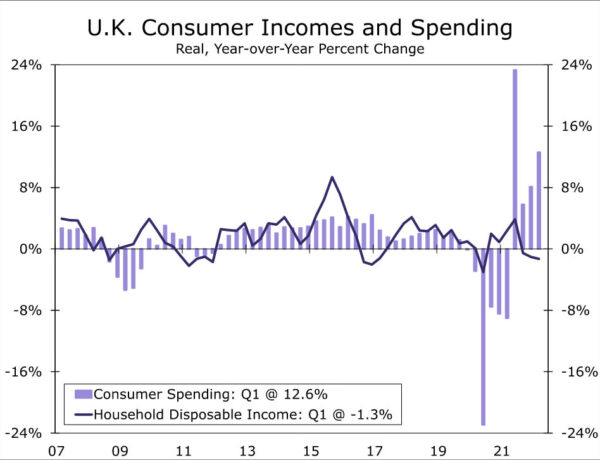 Signs of A Slowdown Showing Through

Indeed, more recent data for the second quarter is starting to reveal the contours of that economic growth slowdown. On the consumer side, April retail sales rose 0.4% month-over-month, but that was more than offset by a 0.5% decline in May sales. As a result, the level of retail sales for the April-May period is 0.8% below their Q1 average, hinting at potential drop in consumer spending in the second quarter. Meanwhile, the broader activity data from the monthly GDP figures is more dated, but still hints at a possible contraction in activity in Q2. For April, the level of overall GDP was 0.4% below its Q1 average and services activity was 0.3% below its Q1 average. Without a sharp rebound in activity in either May or June—which seems rather unlikely—the U.K. economy seems on course for a contraction in the second quarter. Finally, the U.K. PMI surveys also point to moderate growth. In particular the U.K. services PMI fell sharply to 53.4 in May and held at that more subdued level in June, an indicator of slowing economic momentum ahead. 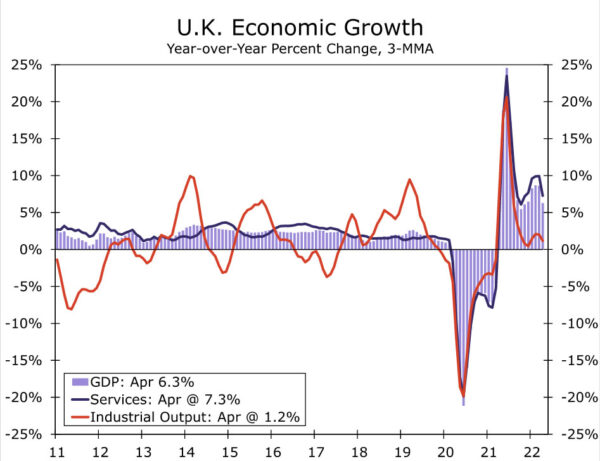 Overall, both the consensus forecast and the Bank of England forecast is for GDP to decline in the second quarter. However, it is not just Q2 2022 that could spell trouble for the British economy. As U.K inflation accelerates further this year, and as the U.S. economy slows late this year and falls into recession during 2023, we believe that could also be enough to tip the U.K. economy into recession by early next year. We expect U.K. GDP growth to come to a standstill by Q4 this year, and with respect to sequential growth, see U.K. GDP declining 0.4% quarter-over-quarter (not annualized) in both Q1 and Q2 of 2023. In terms of calendar year growth, we expected U.K. GDP to rise 3.8% in 2022, but to dip by 0.1% in 2023. 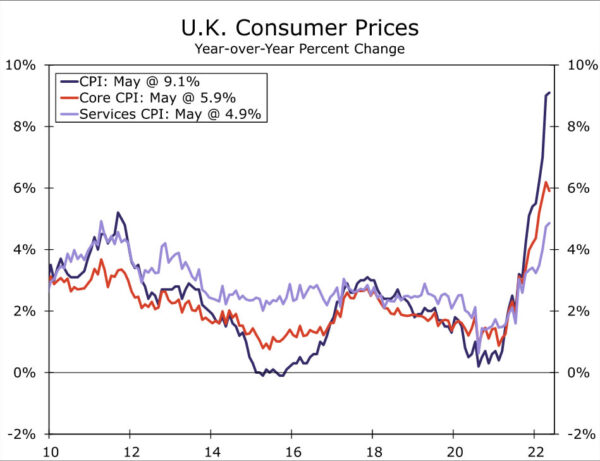 However, even against this uncertain growth backdrop, intensifying inflation pressures suggest the Bank of England will need to continue with its monetary tightening cycle for a while yet. In fact, at its latest monetary policy announcement in June the Bank of England raised its policy rate 25 bps to 1.25%, while policymakers also said they would be “particularly alert to indications of more persistent inflationary pressures, and will if necessary act forcefully in response.” Six policymakers voted in favor of the 25 bps increase, while three policymakers dissented in favor of a larger 50 bps increase. Clearly further Bank of England tightening will be forthcoming and while we do not, at this time, expect the Bank of England to deliver the larger 50-75 bps rate increases that some other central banks have delivered, we do anticipate a short, sharper rate hike cycle from the U.K. central bank. Specifically we see a steady series of 25 bps policy rate increases at upcoming meetings in August, September and November, which would lift the policy rate to 2.00%. We expect a pause from the Bank of England in December, a pause that we believe will ultimately prove to be the end of the rate hike cycle. As the U.K economy tips into recession by early 2023, and inflation begins to slow meaningfully from the current elevated levels, we anticipate eventual monetary easing from the Bank of England. We expect the U.K. central bank to begin lowering its policy interest rate during the second half of 2023, by a cumulative 50 bps to 1.50% by the end of next year.

Overall, this mix of gradual monetary tightening and rapid inflation (meaning that real U.K. policy interest rates will remain substantially in negative territory), combined with a U.K. economic downturn, provides an underwhelming backdrop for the U.K. currency. We have revised our forecast for the pound lower, and now see a trough in the GBP/USD exchange rate around $1.1700 in mid-2023. Even as the U.S. economy falls into its own recession and the Fed begins to lower interest rates by late next year, we believe that headwinds facing the U.K. economy will mean only a modest rebound for the pound, and we target a GBP/USD exchange rate of $1.1900 by the end of 2023.