Canada’s central bank isn’t done raising interest rates. RBC (and markets) expect a 75 basis point increase when the BoC announces its next decision on Wednesday. That would be the largest single rise since the 1990s. May CPI growth at 7.7% (year-over-year) is running well above the bank’s April forecast of 5.8% in the second quarter. And 60% of the prices tracked by the measure are growing above the BoC’s 1% to 3% target range by our count. Worryingly, those higher price readings are beginning to seep into longer run inflation expectations. Most businesses and consumers still expect inflation to moderate toward pre-shock levels beyond the next 2 to 3 years—but the share expecting it to last longer is edging higher. An unhinging of longer-run inflation expectations from the BoC’s targets would disrupt decades of effective inflation-targeting monetary policy. It would also require much larger and more damaging interest rate hikes to reverse.

Against that backdrop, we expect the economic growth risks from hiking rates too aggressively in the near-term will be overshadowed by the medium-term cost of not doing enough. The overnight rate remains too low at 1.5%. And the 75 basis point hike we expect this week would still leave it towards the lower end of the bank’s estimate of its ‘neutral’ range. We expect the central bank to continue on a more aggressive hiking path with another 75 basis point increase in September.

The housing market is already reacting to higher borrowing costs, with home sales in June dipping as much as 30% to 40% compared to a year ago in key markets like Toronto and Vancouver. Consumer demand for other goods and services should gradually follow and start to trend lower toward the end of this year. This pattern is being repeated abroad and is helping to ease supply chain snarls. We continue to believe inflation is close to its peak, but won’t shift to more sustainable levels until demand slows more significantly. Once that happens, expect the BoC and other central banks to again push rates lower—though this likely won’t play out until the economy undergoes a modest contraction next year. 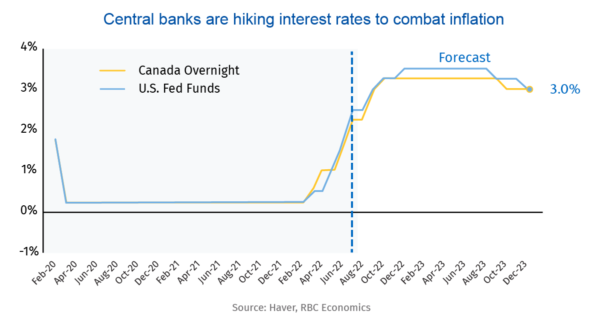 U.S. CPI likely ticked higher to 8.8% in June on the back of surging food and gas prices. Rent prices have been rising faster over the past year should continue to support growth in core prices, given its high relative weight.

Manufacturing sales fell by 2.5% in May, according to StatCan’s preliminary estimate. The decline in volume was probably larger as the auto sector weakened, offset by higher petroleum and coal prices. 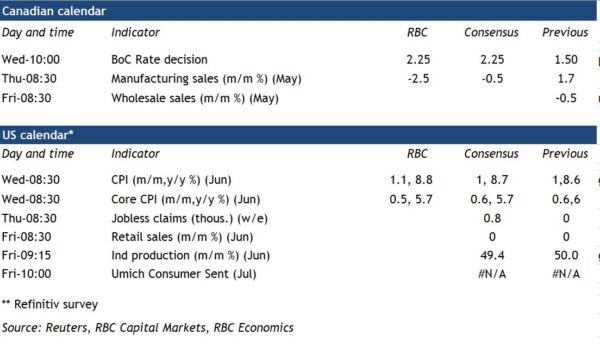