With the US economy teetering on the edge of recession, all eyes will be on the latest employment data at 12:30 GMT Friday. Another solid jobs report is expected, yet various indicators suggest the labor market has started to lose steam. While a disappointment could extend the latest retreat in the dollar as markets price out some Fed tightening, it’s still too early for a trend reversal.

Is it a recession?

The US economy has now contracted for two consecutive quarters, a situation we used to call a technical recession. In fact, business surveys suggest the picture has deteriorated further in the third quarter, as the cost of living crisis keeps squeezing consumers and soaring interest rates have kneecapped the housing market.

Yet both the Federal Reserve and the White House insist this is not a ‘real’ recession, since we haven’t really seen companies shutting down or any widespread job losses. They argue that the economy cannot be in recession with the unemployment rate near a five-decade low.

The problem with that logic is that they are looking into the past to justify how strong the economy is. Labor market indicators are typically the last domino to fall – the jobs market always looks great just before a slump. It’s a backward-looking measure. 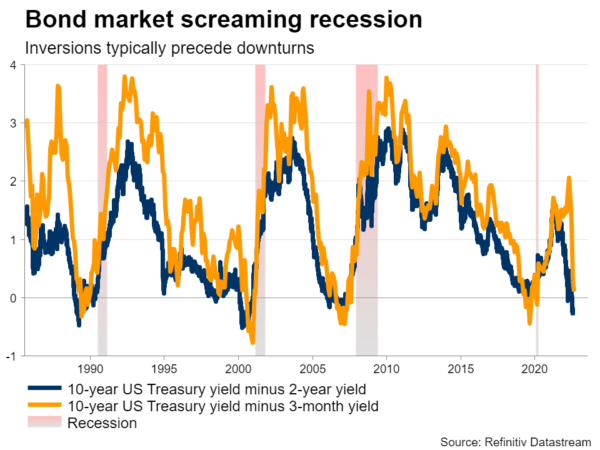 In contrast, all the forward-looking indicators are screaming recession. New business orders have softened sharply, inventories are high, and consumer confidence is in the gutter. Even the Fed’s favorite recession predictor, the difference between 3-month and 10-year Treasury yields, suggests a downturn is imminent.

Nonfarm payrolls are expected to come in at 250k in July, less than the 372k previously but still a solid number all around. The unemployment rate is projected to have held steady at 3.6%, while average hourly earnings are seen cooling down on a yearly basis.

As for the risks surrounding these forecasts, most indicators that have been released so far suggest a disappointment is more likely than a positive surprise. The S&P Global composite PMI showed job creation slowing to the weakest pace since February, while the employment sub-index of the ISM manufacturing survey remained in contraction for a third month.

Meanwhile, jobless claims continued to climb during the week the employment data was collected. This suggests more people are filing for unemployment benefits, although the absolute level is still low from a historical perspective. 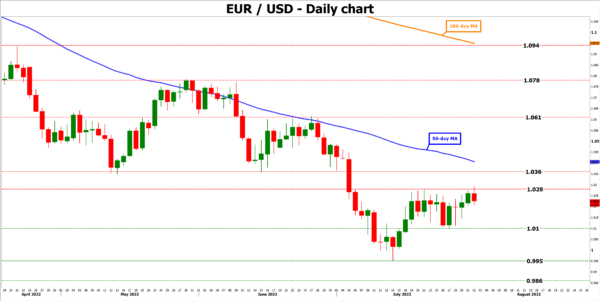 Therefore, the jobs market is not crashing but the forecasts do seem a little too rosy. If nonfarm payrolls come in closer to zero instead, that could deal a blow to the mighty US dollar, likely sending euro/dollar above the 1.0280 zone and towards the 1.0360 barrier.

In the bigger picture, even a disappointment in US employment is unlikely to derail the overall uptrend in the dollar. Yes, the markets might price out some tightening, but that wouldn’t be a game-changer for the reserve currency.

Let’s put it this way – if the Fed slows down because of recession fears and the situation in the rest of the world is even worse, safe-haven flows could keep the dollar supported nonetheless. And the situation in Europe is definitely worse, with the economy headed for an even deeper recession according to business surveys, as the energy crisis bites. 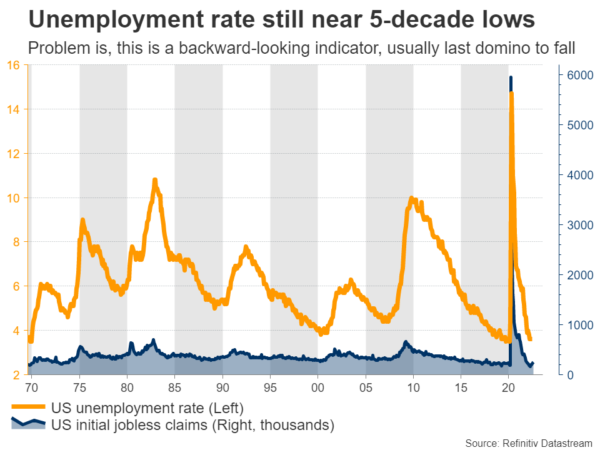 Instead, what is needed to truly curtail dollar strength is an improvement in the growth outlook for Europe and Asia. This will require lower energy prices, or at least stable prices for some time. OPEC meets this week but there is mounting speculation it cannot produce much more even if it wanted to.

As such, any trend reversal in the dollar might have to wait until there’s a ceasefire in Ukraine, which doesn’t seem imminent. Until then, it’s difficult to argue with the trend in euro/dollar and if sellers reclaim control, their first battle could be around the 1.01 region.

Finally, note that the ISM services PMI will also be released on Wednesday and might be crucial in setting market expectations ahead of the employment report.