Action Forex
HomeContributorsFundamental AnalysisBitcoin Fails to Keep Up with Stocks

Bitcoin Fails to Keep Up with Stocks

Total crypto market capitalisation, according to CoinMarketCap, rose 1.8% to $1.08 trillion overnight. The Cryptocurrency Fear and Greed Index lost 4 points to 30.

Bitcoin’s drift towards the lower end of the uptrend channel has paused, but this is a weak result compared to the 2.6% rise in the Nasdaq, with which the cryptocurrency market is closely correlated. We are still left to guess where the most consistent trend and market noise show. The stock market was pushed yesterday by jumps in individual securities after quarterly earnings reports. In general, the macroeconomic situation is somewhat cautious. 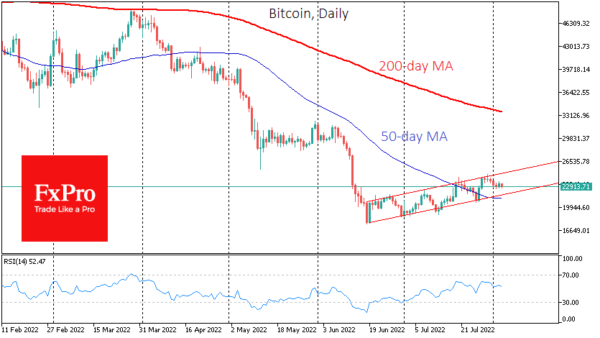 The Fed officials were proving to the markets that they were hoping for a quick reversal of monetary policy from tightening to easing. They hinted at their willingness to raise the rate more than previously estimated.

Cryptocurrencies are sensitive to financial conditions, as rising rates reduce the availability of money, and this is especially true for such financial assets.

Michael Saylor, an iconic figure in the crypto industry, is stepping down as CEO of MicroStrategy. The reason for Saylor’s departure could be the dissatisfaction of MicroStrategy’s investors with the company’s financial results, whose losses from BTC depreciation exceeded $1 billion.

The ECB believes that national digital currencies (CBDC) will displace bitcoin and other cryptocurrencies because of their higher potential.

Online broker Robinhood has announced a 23% staff cut amid the collapse of the crypto market. Robinhood issued a negative second-quarter financial report this week. New York authorities fined the crypto platform $30 million for failing to comply with anti-money laundering and cybersecurity measures.

Solana users lost more than $8 million due to a blockchain vulnerability. Hackers hacked about 8,000 SOL-based wallets. Major crypto exchanges said they would improve user security after Solana was hacked.