This week, the debate on whether the Fed will be able to achieve a soft landing intensified. Equities were trading up most of the week as investors bought into the positive economic news with an expectation that a slowdown in economic growth will avoid a severe downturn. In contrast, the bond market took a grimmer view of the future, by pushing the 10Y2Y yield inversion deeper into negative territory, suggesting a recession may be looming on the horizon.

Investors weren’t the only ones arguing about the economic prospects. In academic circles, the debate on whether a soft landing can be achieved was out in the open. At its core is the argument that job vacancies can’t decline by a large amount without the economy falling into recession. This week’s release of June’s Job Openings and Labor Turnover Survey (JOLTS) showed that job openings dipped to 10.7 million while job vacancy rate continued to decline, indicating we have likely already surpassed peak tightness in the labor market. Still, demand for workers continued to outpace supply – a sign of a still strong labor market.

Indeed, anyone in search of more signs that the economy is in fact not in a recession need to look no further than today’s jobs report. July data shows that the economy added a whopping 528k jobs (well above the consensus forecast of 250k), while revisions resulted in additional 28k jobs – enough for the payroll figures to surpass their pre-pandemic level (Chart 1). The unemployment rate declined by a tenth of a percentage point to 3.5%, while the labor force participation rate fell slightly to 62.1%. Furthermore, average hourly earnings accelerated – not quite what the Fed was looking for as this increases the possibility of inflation becoming entrenched. 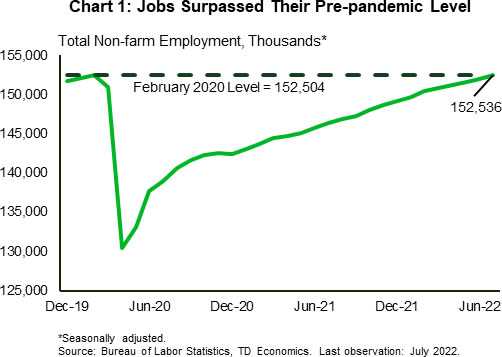 Meanwhile, sentiment indicators also surprised to the upside. The Institute for Supply Managements’ (ISM) readings for the manufacturing sector slipped modestly but came in above expectation. Demand is clearly slowing with new orders contracting for the second month in a row. Still, this comes with less pressure on suppliers, as supplier delivery times rose at their slowest pace since before the pandemic. Moreover, the inventories subindex continues to show improvement. This corresponds with rising auto inventories, where increased production helped improve market supply to roughly 28 days from February’s low of just 24 days.

The ISM services index pointed to a broad pickup in services activity, proving again that there is still plenty of pent-up demand. The gap between the supplier deliveries time and the rest of the index’s drivers narrowed in July – a month after a similar improvement in the manufacturing sector. This seems to have contributed to a decline in the prices paid component in both sectors of the economy (Chart 2). The sizeable deceleration in the ISM price subindexes may very well be a harbinger of a slowing pace in broader price growth, which we’ll hopefully see in next week’s CPI report. 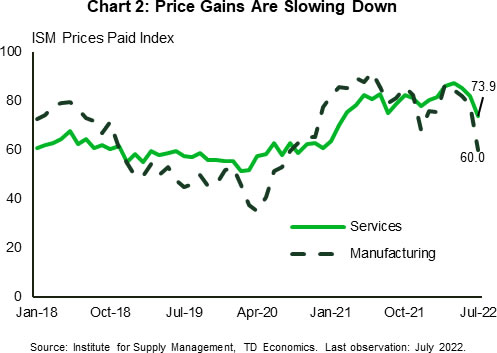 Still, at the 40-year high price growth is too overwhelming for the Fed to scale back on rate hikes. For now, robust employment growth adds further conviction that the economy remains on a solid footing and suggests the FOMC needs to remain aggressive in tightening rates to help cool inflation and re-anchor inflation expectations.

Coming on the heels of the soft GDP print for May and the modest flash reading for June, this week brought further signs that the Canadian economy is slowing. Nowhere has this been more evident than the housing market. Under the weight of soaring borrowing costs and still elevated home prices, the Canadian housing market continued to cool in July. Preliminary sales data from the regional real estate boards out this week showed that resale activity and prices across Canada’s major cities were all lower.

The most glaring declines came from the GTA, where home sales were down 47% from July 2021, which was more than the 41% year-over-year drop reported in June. Meanwhile, supply continued to increase, with active listings up 58% from year-ago levels. Prices were also down on the month. Across the more expensive detached segment, home prices swung from a modest year-over-year gain to an outright decline in July (Chart 1). 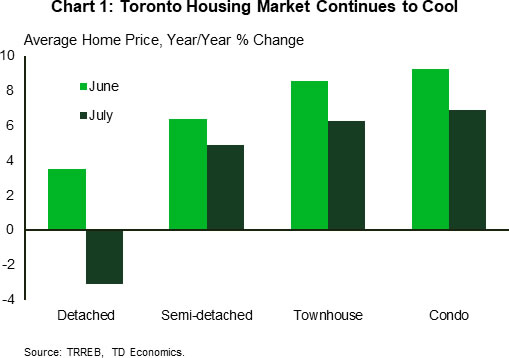 In Vancouver, the slowdown also accelerated, with sales down 43.3% from last year. Unlike in Toronto, detached home prices were still higher – up 11% from year-ago levels – though gains have also ebbed relative to June. The more affordable Calgary market is holding up better than its pricier peers, with sales down just 2.5% from last year. Falling sales across the detached and semi-detached segments were largely offset by gains in the more affordable multifamily segment. Detached prices were still up 14.8% y/y in July.

The theme of a slowdown extended to the labour market. Friday’s job report surprised to the downside, with the labour market shedding 30.6k jobs in July. This marked the second consecutive monthly decline, and the loss of hiring momentum is becoming increasingly evident (Chart 2). The underlying details of the report were also on the softer side, with full-time employment falling by 13.1k, while hours worked declined by 0.5% m/m. Perhaps one silver lining is the fact that the labour market is still tight, with the unemployment rate holding at 4.9% – matching its historic low in June. Wage growth also remained strong, with average monthly earnings up 5.2% y/y. 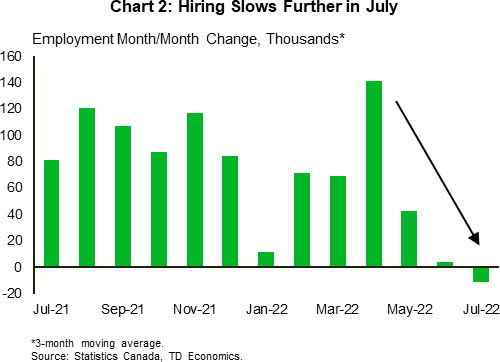 The slowdown in the labour market and broader economic activity suggests that previous rate hikes are already starting to bite. Indeed, this is something that the Bank of Canada is trying to accomplish as it works to rein in inflation. While the Bank will likely find some solace in the nascent signs of weakening demand, the fact that wage growth remains elevated suggests more will be required in terms of monetary tightening to cool current inflationary pressures. To that end, the focus now shifts to the July CPI report which will be released on August 16th, as markets try and gauge just how big of move the BoC has in store in September. Stay tuned!