Action Forex
HomeContributorsFundamental AnalysisWeek Ahead – Will the Fed Fire Back at Jackson Hole?

With the summer coming to a close, Fed officials will head to Jackson Hole for their annual symposium. Financial conditions have loosened lately despite the forceful rate increases, which is counterproductive for the central bank. If they push back, that could spell trouble for risk assets but good news for the dollar.

The top brass of the Federal Reserve will head to the central bank’s summer retreat in Jackson Hole, Wyoming on Thursday to discuss monetary policy. This venue has been used in the past to signal major policy shifts, so it is seen as an unofficial policy meeting.

Fed officials are caught in a bind. Despite raising interest rates at the speed of light, their actions didn’t have the desired effects. Yields on government bonds have pulled back and stock markets have rallied with a vengeance since June, ignoring signals from policymakers that they are far from declaring victory on inflation.

As Chairman Powell pointed out, Fed policy is transmitted mainly through ‘financial conditions’, which is essentially a code phrase for bond yields and stocks. The central bank needs tighter financial conditions to slow down the economy and tame inflation, but they have been loosening instead. 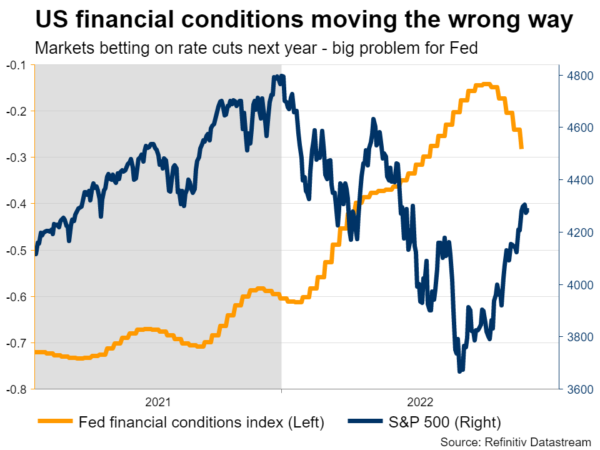 That’s a problem for the Fed. Inflation is still running at 8.5% and looser financial conditions mean it might stay hot for longer. In turn, that would require more monetary tightening to compensate, putting unnecessary pressure on an economy that is already stalling.

As such, the Fed could push back, either by hyping the prospect of another three-quarter-point rate increase in September that markets currently see as a coin toss or through its balance sheet. The process to reduce the balance sheet has already started and will ramp up next month, with $95 billion in securities rolling off per month as they mature.

If Powell and his colleagues want to tighten financial conditions, all they would have to say is they are having conversations on this topic. It would be a hint that the pace can be ramped up further through active sales of bonds or mortgage backed securities, instead of the current passive rolloff.

A more forceful tone could dampen the comeback in equity markets and simultaneously add fuel to the US dollar, which continues to steamroll its opponents. The energy crisis has ravaged the euro, the Bank of Japan’s refusal to tighten policy has crippled the yen, and the implosion in China’s property sector has dismantled the commodity currencies. 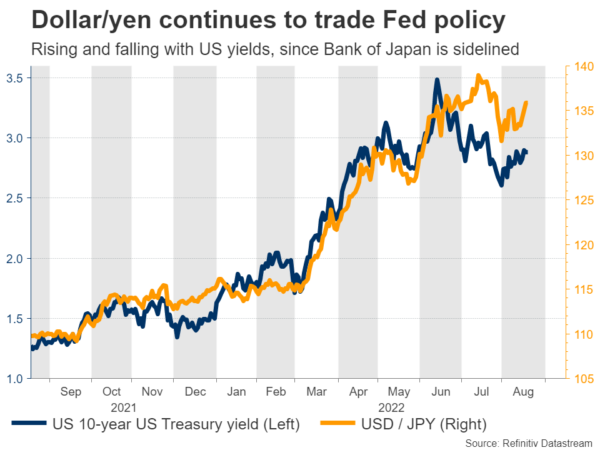 There’s also a barrage of US data releases, starting with the S&P Global PMIs for August on Tuesday, which will reveal whether growth and inflationary pressures continue to cool off. Other releases include durable goods orders on Wednesday, the second estimate of GDP for Q2 on Thursday, and the core PCE price index on Friday.

The past few weeks have been dreadful for the European economy, with the energy shortage pushing natural gas prices on the continent to new records while an intensifying drought in Germany dried up rivers and made it harder to transport supplies.

It’s been a horror show for German industry, whose entire business model used to rely on cheap energy. With gas prices so incredibly high, many companies are uncompetitive and perhaps unprofitable. And if Europe’s powerhouse is struggling, other countries won’t escape unscathed – the supply chain is too interconnected.

Traders will look to the latest PMI business surveys, due out on Tuesday, for an assessment of the damage. Forecasts point to a further cooling of the Eurozone economy in August, with the manufacturing index sinking deeper into contractionary territory and the services print just barely staying in expansion. 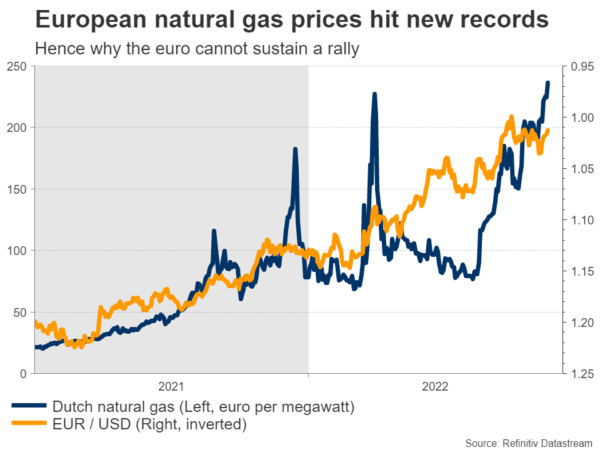 If anything, the risks seem tilted towards disappointment considering that European companies also have high exposure to China, where economic growth is evaporating at an astonishing pace. That could curb bets for a three-quarter-point rate hike by the ECB next month, something investors currently assign a 45% probability to, and spell more trouble for the euro.

The latest relief rally in euro/dollar was rejected by the 50-day moving average and if the Fed indeed strikes a hawkish tone next week while business surveys highlight the Eurozone’s economic problems, there could be another battle around parity.

The United Kingdom will also get a glimpse at its own PMI surveys for August on Tuesday. It has been a gruesome year for sterling so far, which is underperforming even the war-stricken euro despite the Bank of England raising interest rates at every meeting.

Although the UK doesn’t import much energy from Russia directly, it is not immune to the energy crisis either. The trade trade deficit has blown up as a result and since the UK also runs a large government deficit, sterling has become very sensitive to any shifts in global risk sentiment. 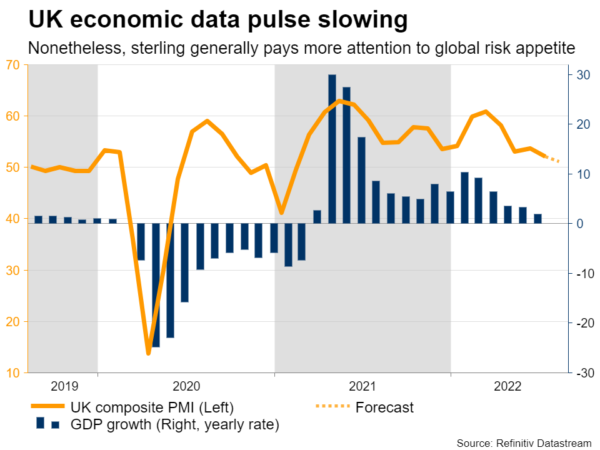 In other words, the main variable for the pound moving forward might be how stock markets perform, since investors already have a good idea of what the BoE will do. In this sense, the risks seem tilted to the downside. Equities have rallied dramatically since June but mainly due to expanding valuations – earnings growth is not impressive and economic data keeps losing momentum.

It might have simply been one epic short squeeze, which seems to be running out of fuel.