Fed Continues to Guide US Economy Towards a Recession

Despite the recession fears, US economy performed relatively well over the summer, as the GDP contraction in Q2 was driven by slower inventory growth. Aggregate demand, fuelled by the pandemic-era stimulus, recovered near its pre-covid trend already in late 2021, and despite the sharp decline in consumers’ real incomes, the July retail sales continued to signal broad-based growth in nominal spending. As we highlighted in Research US – Higher for longer, 19 August, the persistent drop in the US labour force combined with demand near pre-pandemic trend signals, that output gap has turned positive.

While we see European inflation accelerating further towards the fall, US headline inflation has likely already peaked in June. Gasoline prices are down 23% from the peak, and we now expect energy contribution to turn negative in 6 months’ time, which implies further declines in headline inflation. In addition, food-related futures prices have fallen from the recent peaks and PMI indices point towards continuing easing in supply chain challenges. That said, the positive output gap combined with the tight labour markets will continue to fuel the underlying price pressures until Fed brings the aggregate demand back into equilibrium by tightening financial conditions further. 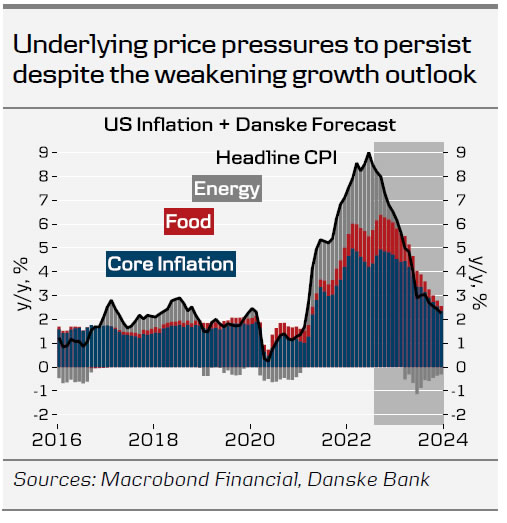 The economic imbalance challenging the Fed is the most evident in the labour markets, as even though labour demand appears to have peaked, the ratio of job openings to unemployed remains at historically high levels. Unit labour cost growth outpaced the high consumer price inflation during H1, suggesting that businesses are pressured to continue hiking prices also in the future. Given the 2% inflation target and productivity growth averaging just above 1% during 2010s, wage growth around 3% would be consistent with Fed’s goals, while in July the realized pace was 5.8% m/m AR.

The combination of rapid wage growth and the recent fall in gasoline prices implies that real incomes recovered in July & August. This is in stark contrast to Europe, where the escalating energy crisis continues to erode consumers’ purchasing power at a record pace. Despite the negative GDP prints in H1, private consumption continued to grow, albeit at a subdued pace. With the main headwind of negative real income growth now easing, we expect GDP to rebound moderately during the 2nd half of the year. 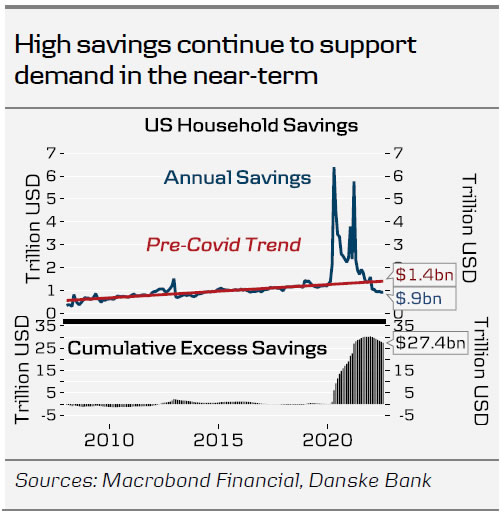 High demand for energy and especially LNG ensures that US exports outlook remains relatively positive, while imports are likely to decline on the back of gradually easing demand and still normalizing goods consumption. Net exports – which was the key negative contributor to the weak Q1 GDP print – will likely turn positive during H2. 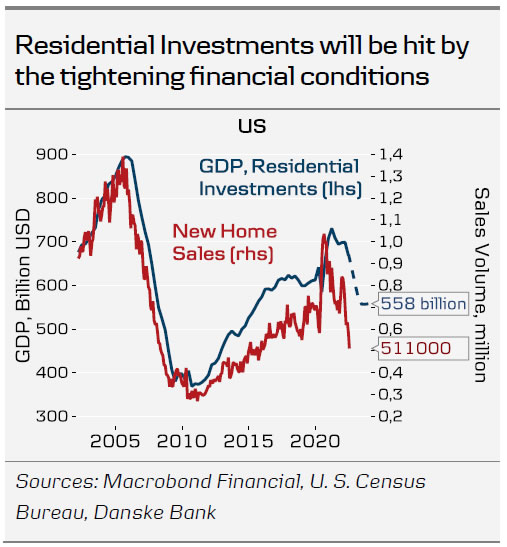 We still expect the US economy to fall into a moderate recession in Q2 2023. The exact timing and depth of the recession depends on the Fed’s chosen path of policy tightening. The recent communication suggests, that Fed policymakers prefer an approach, where financial conditions are tightened to moderately restrictive levels (Fed Funds around 3.5- 4.0%) and held there well into the next year, instead of rapidly hiking rates closer to 5-6%.

This implies lower risk of a near-term recession, but also that growth will remain below potential for longer. It will take time, until the economic imbalance driving the inflationary pressures has been corrected, and this will likely also be reflected in the stickier components of inflation remaining above target at least for 1-2 years. We do expect core inflation to gradually ease towards 2023 driven especially by core goods prices, but see core CPI still around 3% y/y by the end of next year.

The downside scenario for growth is related to faster slowdown in private consumption fuelled by weakening labour market sentiment. According to PMI/ISM sub-indices, companies’ inventories have rebounded as real demand growth remains moderate and supply chain difficulties have eased. Weak growth outlook will weigh on companies’ pricing power, revenues and put increasing focus on costs. Especially real goods consumption is bound to continue weakening, as it remains abnormally high due to the lingering pandemic effects. The possible consequences for labour demand could start to have a negative impact on real private consumption. From Fed’s perspective, this is desirable to some point as labour market conditions remain too tight, but a combination of weakening employment and slowing real consumption could spiral into a deeper recession than what was originally anticipated. We continue to emphasize, that engineering ‘soft landings’ has historically been difficult, and we see growth risks tilted to the downside.

Another risk scenario relates to Fed giving up on the tightening emphasis too early, leading to repeating cycles of (commodity-driven) inflationary waves and weak growth due to persistently tight monetary policy. Fed got the first taste of this in July, as markets began pricing in rate cuts for 2023, which lead to easing in financial conditions and subsequently a modest rebound in certain commodity prices. In our view, Fed does not have the luxury of giving up on the restrictive policy narrative for now, as underlying inflation pressures remain high – even if recession risks become increasingly apparent. Fed might have to accept, that the economy will have to go through a deeper-than-anticipated recession in order to avoid years of stagflation down the line. 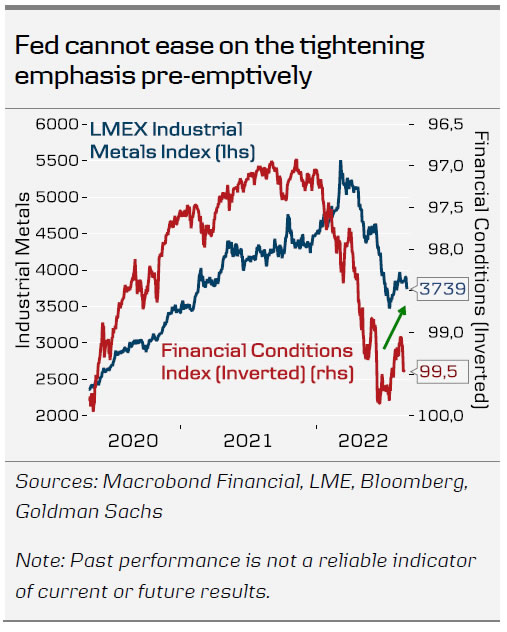