The Weekly Bottom Line: Full Steam Ahead for the FOMC

U.S. – Full Steam Ahead for the FOMC

Hopes that the Federal Reserve can still engineer a soft landing were tested again this week. Consumer Price Index (CPI) data for August showed inflation was far hotter than expected, leading to a sharp repricing of market expectations on the future path of rate hikes. Following the release, market participants were quick to fully price a 75-basis point move from the Federal Reserve next week, and now expect the Fed funds rate to reach 4% by year-end. The pull forward in rate hike expectations triggered a sharp sell-off in U.S. equities, with the S&P 500 suffering its worst day of the year – falling by over 4%. Equities dipped a bit further through the remainder of the week and are down 5.5% at the time of writing.

In terms of the actual CPI figures, headline inflation rose 0.1% month-on-month (m/m), a few ticks above the consensus forecast. More worrying, was the 0.6% m/m increase in core inflation – a sharp acceleration from July’s 0.3% m/m gain. While some persistence in price growth across service categories such as shelter and healthcare was expected, the August data showed far more breadth and strength across nearly all goods and service categories.

While we’re hesitant to put too much stock in one month of data, the re-acceleration in goods prices is somewhat concerning. Despite demand for consumer goods cooling more recently, goods inflation has shown considerable staying power. This was reaffirmed later in the week where August retail sales data showed only a modest gain of 0.3% m/m (Chart 1). The control group of sales was even weaker, recording a flat reading on the month. 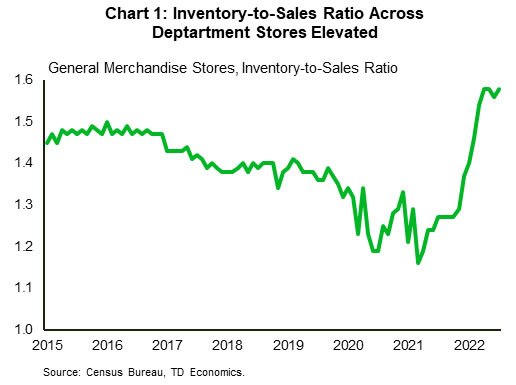 The continued gains in goods prices are even more perplexing when we consider the fact that not only is demand weakening, but inventory levels are also starting to look toppish. Inventory-to-sales ratios across department stores are now well above pre-pandemic levels – suggesting we should be seeing some disinflationary pressure (Chart 2). Other oddities are also starting to emerge across used vehicle prices. The Manheim Used Vehicle Price Index – a measure that captures dealer purchase prices – has fallen by over 10% this year, yet the CPI measure of used vehicle prices has declined by only 1.5%. This suggests that lower costs are not being passed onto consumers, and retailers are instead maintaining wider margins. Over the near-term, this is not necessarily problematic. But if left unchecked, it can start to sow the seeds of more engrained inflationary pressures. Fortunately, that hasn’t happened yet. According to data released by the New York Federal Reserve, both one-and-three-year inflation expectations have continued to move lower, with August readings falling to 5.8% (from 6.2%) and 2.8% (from 3.2%), respectively. 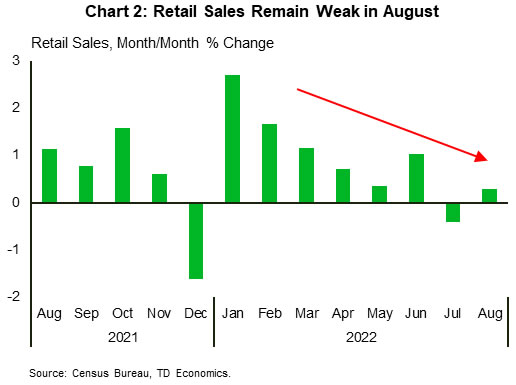 One piece of good news emerged this week, with a tentative agreement reached between U.S. rail companies and the unions representing the rail workers. The labor deal averts what would have been another crippling blow to U.S. supply chains, and almost certainly lead to more near-term pressures on inflation. FOMC officials will likely breathe a sigh of relief, as the focus can remain squarely on what will still be a challenging task; threading the needle of lowering inflation while trying to avoid a recession.

It was a volatile week for financial markets, with the risk-off move causing the TSX to drop approximately 2%, while the S&P 500 declined nearly 5%. Clearly the U.S. CPI data release, which showed an uptick in core inflation, raised expectations that Canadian CPI will show a similar move next week. This raised market pricing that the Bank of Canada (BoC) will have to hike its policy rate even more than previously expected, lifting the Canada 2-year yield by a whopping 25 basis points – to a 15 year high of 3.87% (Chart 1). 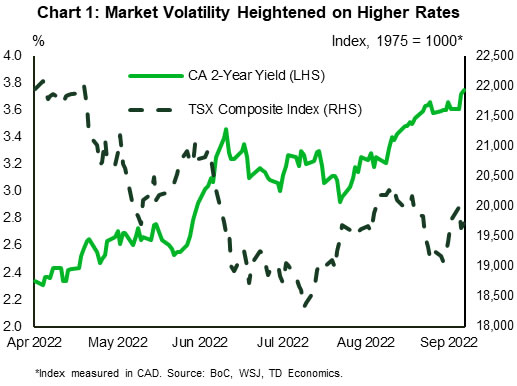 It is our view that the BoC will need to raise rates to a very restrictive level of 4% to decisively break this high inflation cycle. Though it will take time for interest rates to work through the economy, the BoC is closely watching the incoming data. This means that there will be a lot of eyes on next week’s Canadian CPI release. With gas prices having fallen in August on slowing global growth fears, we expect to see further deceleration in the headline CPI print. This is good news, but the BoC will be more interested in the core inflation numbers, which strip out volatile items like food and energy.

If the U.S. CPI data are any indication, we will likely see the impact of high food and fuel prices having spilled into to other inflation components. One area where this is likely to show up is in the rise of services inflation. This is an important category, as services inflation tends to be much more ‘sticky’ than the goods inflation that led this cycle. This means that even if goods (food and fuel) prices ease on global demand fears, rising services prices could keep inflation uncomfortably high for much longer than the BoC would like.

Though inflation will be impacted by higher rates with a lag, the same cannot be said for Canadian real estate. New data on housing this week showed existing homes sales dropped another 1% in August (Chart 2). That brings the level of housing market activity down an astonishing 17% below pre-pandemic levels. The sales decline was apparent in every province, save Ontario, which benefitted from a surprising flurry of transactions in Toronto. This bounce in the higher priced Toronto market helped push the national average home price up nearly 2% on the month. Though it may look encouraging, we believe this improvement in average home prices is only temporary. 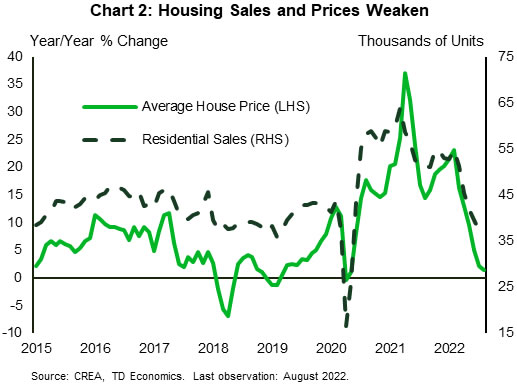 In fact, the more ‘like-for-like’ MLS home price index, which removes some of the compositional effects of the Toronto market, showed another notable decline of 1.6% in August. This weakness more closely mirrors the current market dynamics, where total sales have continued to slide. Given our view that the BoC will continue to hike rates through this year, we are expecting further declines in housing prices, with average home prices dropping by around 20% on a quarterly peak-to-trough basis.