The Fed Fights On

The FOMC further stepped up its inflation-fighting game in September. The Committee hiked the fed funds target range by 75 bps, as was widely expected, but delivered a more hawkish projected path for short-term rates through this year and next. The median FOMC participant now expects the fed funds rate to rise an additional 125 bps in the two remaining meetings of this year. The FOMC sees rates staying high through next year, with the median estimate for the fed funds rate ending 2023 at 4.6%.

The stricter policy stance expected by the FOMC comes as the Committee sees above target inflation as becoming increasingly entrenched. FOMC members now expect core PCE to remain above 3% through next year and above 2% all the way through 2025. The good news is that policymakers expect inflation to steadily slow over the next few years, but higher rates are also expected to inflict greater pain on the economy. Estimates for real GDP growth next year were revised lower and, with a median of 1.2%, are more clearly below the economy’s potential growth rate. More telling, however, was the upward adjustment to unemployment rate projections in 2023. The median estimate among participants rose to 4.4%, which would be nearly a percentage point above the low of the current cycle. All told, the Committee appears to be inching toward our own view that it will take a mild recession to get inflation firmly back to the 2% target.

In an effort to rein in decades-high inflation, the Federal Open Market Committee (FOMC) delivered another massive 75 bps increase in the federal funds rate at the conclusion of its September meeting today. The move brings the fed funds target range to 3.00-3.25%, the highest level in 15 years. In addition, the FOMC reaffirmed its plan to up the pace of balance sheet reduction this month. From September onward, the Fed will allow up to $60 billion of Treasury securities and $35 billion of mortgage-backed securities to roll off its balance sheet, which is double the June-August pace and significantly faster than the pace of quantitative tightening in 2017-2019.

The aggressive move to combat inflation was widely expected. Chair Powell delivered a clear and concise message that inflation is the FOMC’s “overarching focus” right now and that the Committee will do what is necessary to restore price stability, a sentiment that has been echoed by one FOMC member after another. In today’s statement the Committee reiterated that it is “strongly committed to returning inflation to its 2% objective” and “highly attentive to inflation risks”.

How much more the FOMC believes it will need to tighten to achieve that objective became clearer with an update to the Summary of Economic Projections (SEP). The median participant’s expectation of where the fed funds rate would end this year rose to 4.4%, implying about an additional 125 bps of tightening in the two remaining meetings of the year (Figure 1). Not only was that more hawkish than in June (when the median expectation for the fed funds rate for year-end registered 3.4%), but it was more aggressive than both pre-meeting market pricing as well as our own most recent forecast. In addition to a faster pace of tightening in the near term, most FOMC participants saw the federal funds rate staying high through 2023 and 2024. The median year-end estimates for the federal funds rate in 2023 and 2024 were 4.6% and 3.9%, respectively. Only in 2025 does the FOMC expect the fed funds rate to be back to a level that is more in line with its “longer-run” estimate of 2.5% for short-term interest rates. 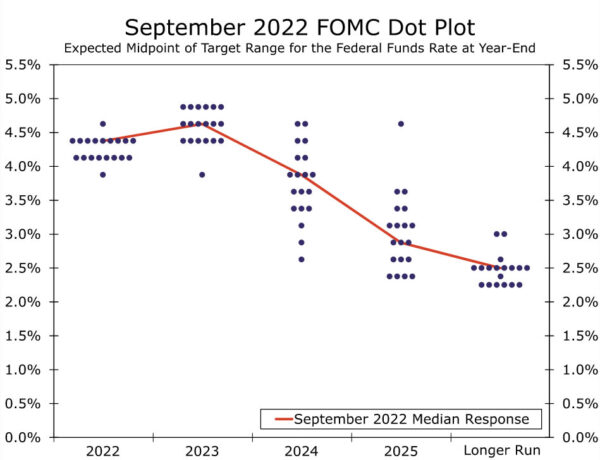 Interestingly, there appeared to be a significant amount of agreement among FOMC participants on how tight monetary policy will need to be in 2023. All but one participant saw the federal funds rate finishing 2023 between 4.4% and 4.9%. However, the 2024 dots exhibit a significantly wider range of outcomes, with the lowest projection for the fed funds rate (2.625%) 200 bps below the highest projection (4.625%).

The FOMC’s economic projections make clear that this restrictive stance of monetary policy will not be costless. The median participant looks for real GDP growth of just 0.2% this year and 1.2% next year (Figure 2). Unemployment is also anticipated to climb more significantly next year; the median unemployment rate estimate among participants rose to 4.4% from 3.9% in the June SEP (Figure 3). Such an outcome could still be construed as a “soft-ish” landing for the economy, but the Committee appears to be inching toward our own view that it will take a mild recession to get inflation firmly back to the 2% target. 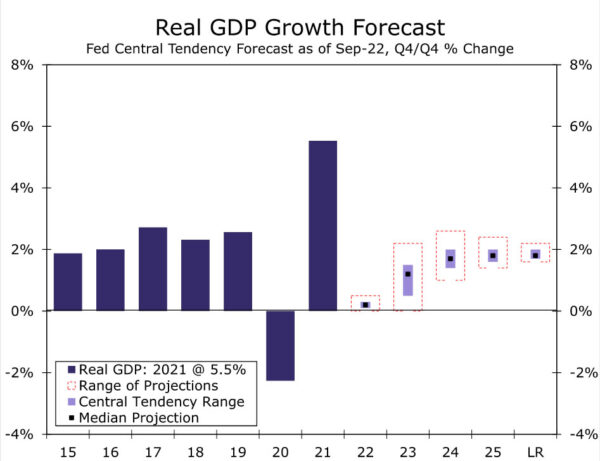 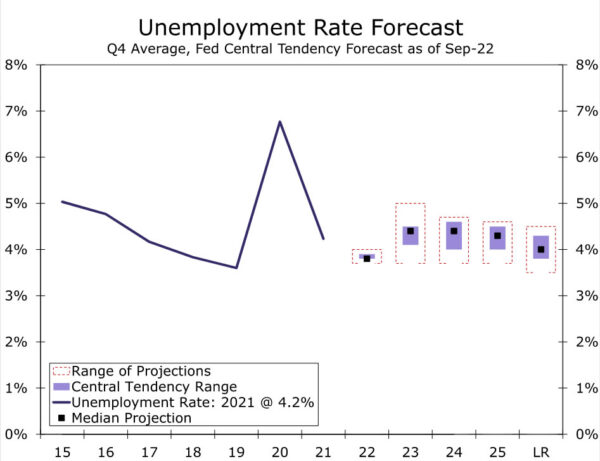 Clearly by the FOMC’s reckoning, inflation is becoming more entrenched. Officials bumped up estimates for core PCE inflation in the fourth quarter of this year, with the median projection rising to 4.5% from 4.3% in June. And despite expectations for a materially higher fed funds rate and slower growth in the year ahead, the median estimate for core PCE at the end of 2023 was raised to 3.1% from 2.7% in the prior SEP. Even with the upward revisions to inflation estimates, all but two of the 19 officials are wary that risks to the inflation outlook remain tilted to the upside, suggesting the Fed is far from giving up its hawkish bent. Through 2025, the majority of FOMC participants do not see core PCE returning all the way back to 2.0%. 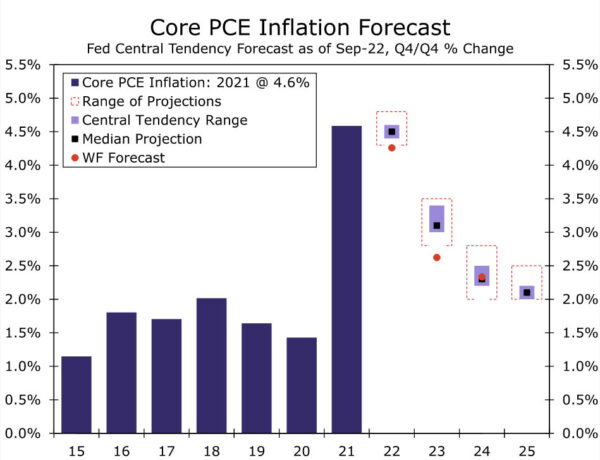 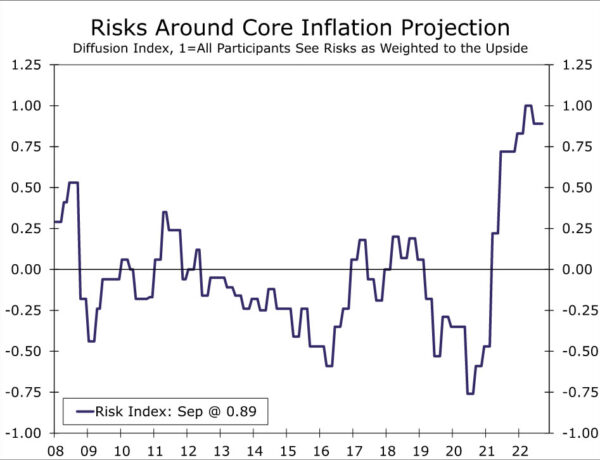 Another 75 bps Rate Hike on the Table in November

At the start of the year, the Federal Reserve was still easing monetary policy via purchases of Treasury securities and mortgage-backed securities. Just nine months later, the median FOMC participant expects the federal funds rate to finish the year 4.4%, a rate not seen since 2007. In his speech at Jackson Hole, Chair Powell made clear that the ongoing fight against inflation will not be won easily, and today’s FOMC meeting reinforces that policymakers are prepared for restrictive policy well beyond 2022. At some point, the FOMC will feel comfortable enough to slow the pace of tightening from 75 bps per meeting to 50 bps or 25 bps. We expected a downshift to 50 bps at the November FOMC meeting, but with today’s dot plot in hand and just one CPI report between now and the November meeting, another 75 bps rate hike is squarely on the table. The balance of risks are clearly tilted to the upside for our current forecast of a peak fed funds rate of 4.00%-4.25%.