Action Forex
HomeContributorsFundamental AnalysisBank of England Update: Another 50bp Hike and We Expect More to...

Bank of England Update: Another 50bp Hike and We Expect More to Come

In line with our expectation, the Bank of England (BoE) hiked the Bank Rate by 50bp to 2.25% with 5 members voting for a 50bp hike, 3 members voting for 75bp and one member voting for 25bp. As expected, BoE announced that outright government bond selling will start with a total reduction in bond holdings of 80 billion pounds over 12 months. The BoE repeated its meeting-by-meeting approach stating that “Policy is not on a pre-set path.”, giving close to no forward guidance to markets.

One of the key takeaways from the Monetary Policy Summary is that the BoE no longer seem to pencil in a recession by Q4 2022. Note no inflation or growth forecast were published at this interim meeting, but not mentioning a recession gives a hint that the recession won’t hit as soon as BoE predicted in August. This feeds well into our narrative of the fiscal stimulus providing near-term support to the economy. With newly elected PM Lizz Truss having announced the energy relief plan, which will cap energy prices for households, BoE now sees the peak in CPI inflation to be just below 11% compared to the 13% projected in August. The BoE emphasised that the package is likely to add to inflationary pressures in the medium term, which strengthens our case for a February hike in 2023. The BoE also repeated the message that they will “respond forcefully as necessary” if inflationary pressures look more persistent, noting that the upward risk could come from stronger demand. More details on the fiscal package will be announced tomorrow (Friday). 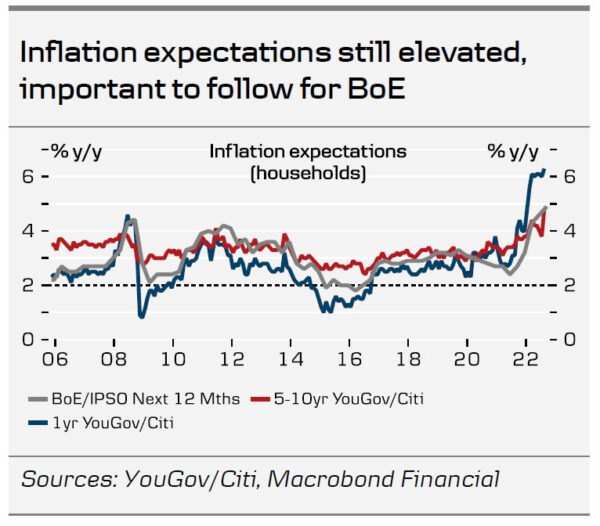 Rates: 10Y gilts jumped 20bp upon announcement as investors’ took note of BoE’s perceived lower recession risk. The market is currently pricing in another 270bp until the third quarter next year and thus expects the rate path to peak at around 4.6%. Our base case remains that of a peak in the Bank Rate of 3.5%.

FX. EUR/GBP initially moved higher upon announcement to 0.8740 from 0.8700. However, the move was overall muted with the cross later settling around 0.8720. We see a case for EUR/GBP to remain elevated in the near-term, but in the longer-term we expect the cross to move lower as we expect the positive USD environment to eventual benefit GBP relative to EUR.

Our call. We still expect BoE to deliver more rates hikes. We pencil in another 50bp rate hike in November and December and finally a 25bp hike in February. We do not expect rate hikes beyond the February meeting, although another 25bp rate hike in March seems like a close call at this point. Our expectations fall below current market pricing as we expect BoE to eventually turn less hawkish amid a weakening growth backdrop.