What Now for Sterling after Investors Lose Confidence in the UK Economy?

The pound crashed to an all-time low versus the US dollar this week as investors fled the UK after losing confidence in the new government’s economic vision. Having already been the second worst performing currency this year, sterling’s year-to-day losses now stand at 20%. But as the selloff shows some signs of easing and the currency stabilizing in FX markets, did the budget mark a permanent downgrade of UK assets, or was this a natural overreaction given the economic uncertainties and Britain’s twin-deficit problem? 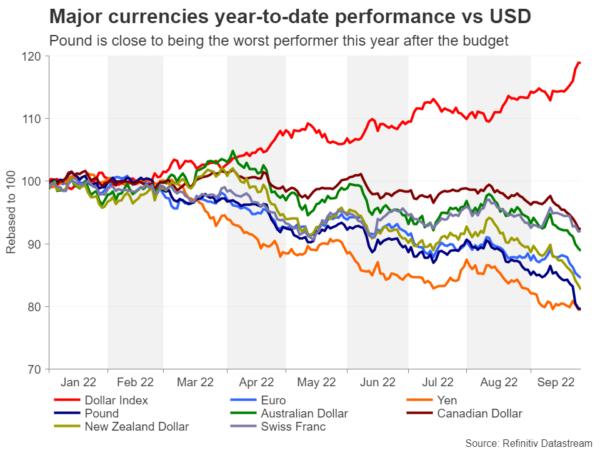 It is not often that tax cuts spark such a massive risk-off episode as investors generally cheer growth-boosting measures by governments. So why did markets react so badly to Chancellor Kwasi Kwarteng’s mini budget, or ‘fiscal event’ as he dubbed it, which turned out to be a full budget in all but name? After all, there is no disputing that the UK economy is in serious need of a kickstart and in theory, Kwarteng’s historically large tax cuts should accomplish that.

The reality is that Britain’s current economic woes are not quite so simple that big tax cuts would solve everything. The government is betting on trickle-down economics – something championed by Margaret Thatcher in the 1980s – to create wealth from the top, which would then ‘trickle down’ to lower income groups.

A budget oblivious to high inflation

Back then, the policy proved to be the right remedy and was credited for triggering an economic boom. But investors have overwhelmingly decided that Liz Truss and her chancellor have vastly misjudged the present economic environment. The biggest flaw in the government’s thinking is that it ignores the single most pressing issue facing the country right now – high inflation. 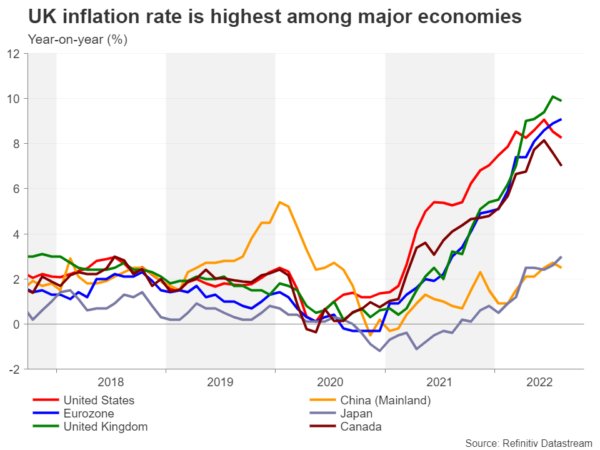 It is universally accepted that spiralling prices are undesirable for achieving economic stability and the Bank of England has a legal obligation to keep inflation around 2%. Yet, slashing taxes at a time when inflation is so hot only serves to fuel price pressures even further as lower taxes tend to increase household incomes, boosting consumption.

The Bank of England would then be forced to raise interest rates even more aggressively than it is doing so right now to meet its inflation target. This not only increases the odds of the economy falling off a cliff, but it also raises the cost for the government to borrow to fund the gap between spending and tax revenue.

It seems that the Truss team has based its economic calculations on the bygone post-financial crisis era when inflation was non-existent, interest rates were at rock bottom and central banks were printing money, all of which pinned bond yields near zero despite heavy borrowing by governments. But that is no longer the case as UK government bond, or gilt, yields have skyrocketed to pre-financial crisis levels and the Bank of England is now engaged in quantitative tightening. 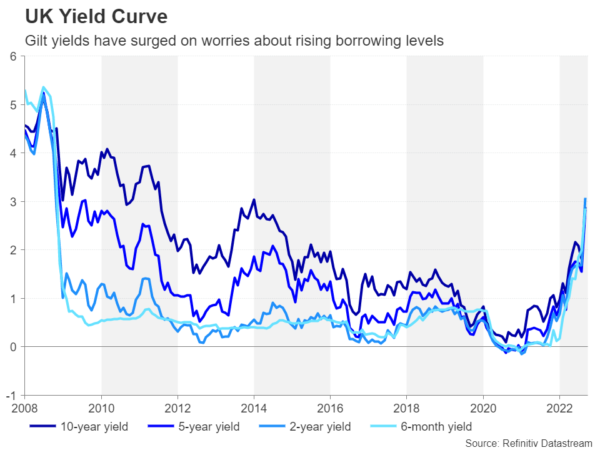 Moreover, if there ever was any possibility of the pandemic-induced inflation being transitory, those hopes were dashed when the energy crisis unfolded after Russia invaded Ukraine. Thus, high inflation is here to stay, at least through to 2023, meaning monetary policy is unlikely to be loosened before then.

A debt crisis in the making?

Investors fear that by borrowing excessively during a period of rising lending costs, the government will become overburdened with its interest payments, risking some kind of a debt crisis in the future. Exacerbating the issue about the sustainability of Britain’s soaring debt level is the fact that the government already had to borrow a lot during the pandemic and most recently, announced an energy relief package worth up to £150 billion to help households with high energy bills.

Economists would argue that the tax cuts could have been saved for a later date as the energy package alone, which is amongst the most generous in Europe, is expected to go a long way in easing the pain for consumers as well as keeping electricity and gas prices capped. Within this context, many would conclude that Truss’ and Kwarteng’s economic plan is nothing short of reckless and motivated purely by securing a victory at the next general election.

Voters are concerned about inequality

But even voters don’t seem too impressed, as the opposition Labour party has widened its lead over the Conservatives after the budget. In yet another miscalculation, the government couldn’t have picked a worse time during the cost-of-living crisis to introduce radical tax reforms that set to benefit the richest the most. Of course, it’s too soon to assume that the gamble won’t pay off and come the next election, as long as low- and middle-income workers are earning more, they might not care if the gap with the wealthiest has widened or not.

The problem is, can the government and Bank of England avert economic disaster before then? Kwarteng tried to calm market nerves by confirming that he will outline a medium-term fiscal plan on November 23 on how to lower borrowing as a share of GDP. But investors aren’t holding their breath.

How will the Bank of England respond?

On its part, the Bank of England has hinted that it will respond fully to the market fallout, but not before its next meeting on November 3. In the meantime, it has decided to make temporary purchases of long-dated gilts in a bid to prevent yields from surging any further. Markets have priced in a 125-basis point rate hike for November, with about one in three probability of a 150-bps increase. What is even more significant, though, is how high markets have pushed up the projected terminal rate. 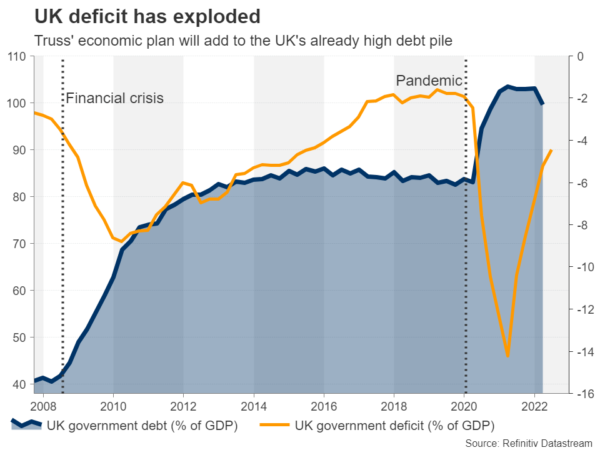 Prior to the budget, investors saw the Bank Rate peaking around 4.75%. It has since shot up to slightly more than 6.0% by August 2023. However, this has done little in defending the pound, which on Monday plummeted to an all-time low of $1.0382. This trough is just above the 361.8% Fibonacci extension of the July-August rebound at $1.0354, suggesting it may take some effort to pierce below this barrier, after which, the parity level of $1.00 would come into scope for traders.

However, if the market mood improves further in the coming days, the current recovery could extend until the 200% Fibonacci of $1.1221, otherwise, it may stall around the $1.07 area. 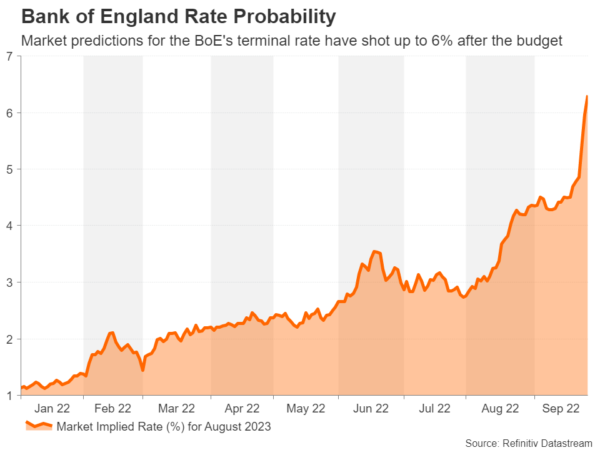 A jumbo-sized rate hike of more than 100-bps in November and a signal that more are on the way should help cable claw back its latest losses, but ultimately, it will be up to the government to restore the UK’s credibility in financial markets. Come November 23, Kwarteng will have to do a lot more than simply talk up the economy and hope that his ambitious 2.5% growth target is both feasible and sufficient enough to reduce debt as a ratio of GDP over the next few years.

Investors, though, will be wishing that the government goes back to the drawing board and returns with fresh ideas on raising additional revenue and finding new sources of savings. At the very least, markets will be on the lookout for some sort of a contingency plan. However, with Truss hell-bent on delivering the pledges she made in her leadership campaign, a U-turn doesn’t seem very likely.

There’s a strong chance therefore that the pound stays mired in uncertainty until the winter cloud has lifted over Europe. By which point, if the energy crisis hasn’t deepened and Truss’ policies begin to have some positive effect, there would be grounds for a meaningful rebound. But before then, BoE rate hikes will at best put a halt to the pound’s slide rather than lift it, while the UK’s large twin fiscal and current account deficits will ensure that it remains at the mercy of global risk sentiment.