Oil and Gold both continued to fade into the week’s end with a China holiday seeing a quiet start for Asia.

WTI finished unchanged at 51.35 on Friday as the selling pressure continued to be seen in the Brent contract, which closed one percent lower at 56.90 as traders lightened longs further into the weekend. With Brent being the month’s outperformer and the technically more overbought of the two, it was no real surprise as news that Iraq and Libya have increased production, that the weight of the selling would fall there.

Both contracts continue to trade consolidative, slowly unwinding the extreme overbought technical picture caused by the pace of the rally in September. We would expect quiet start to Asia trading today with little news of note to move markets over the weekend and China on holiday. That said, a deeper correction cannot be ruled out as both Brent and WTI are resting on support zones as the week gets underway.

Brent spot looks set to test its long-term breakout zone between 56.50 and 57.00 to start the week. A move through this level could see the contract drop back to the 55.00 area initially. Resistance sits above at 57.50 to start followed by the September highs of 59.10. 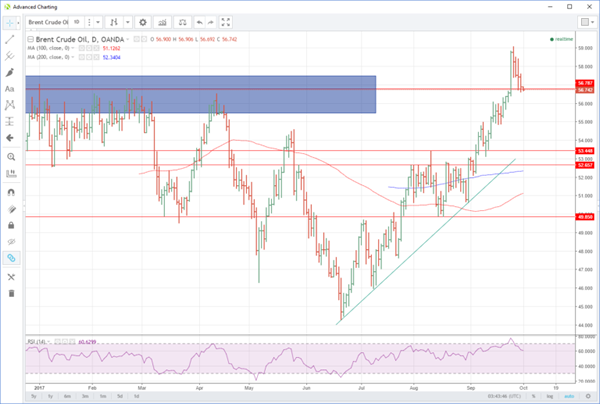 WTI spot is trading at 51.35 this morning, just above its ascending support line at 51.10. It has held all pullbacks throughout the September rally, and a break now could signal a deeper correction to 50.30 and then 49.00. Resistance appears above at 52.50 before its long-term resistance region between 53.50 and 54.50. 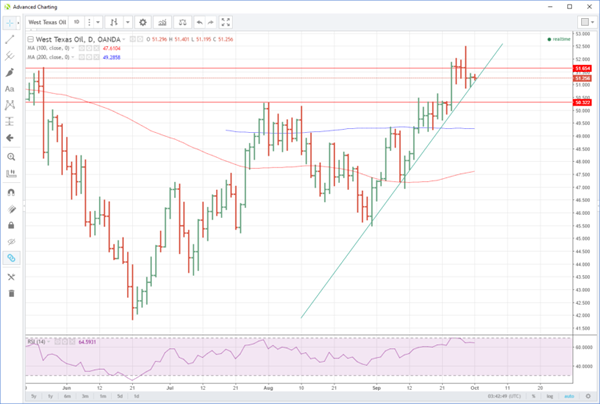 Gold gets off to a quiet start to the week, with the bearish bias continuing from Friday’s session where it fell seven dollars to close at 1280.50. Gold has sagged another four dollars this morning to 1276.50, showing no reaction to the Catalan elections in Spain in what was otherwise a quiet weekend on the news front. With China on holiday this week, physical buying will be muted in early Asia.

U.S. yields and the dollar are clearly the primary drivers of the gold prices at the moment and with both rising gold has wilted closing below its 50% retracement zone at 1281.00 on Friday. Bullish traders will now be nervously eyeing the 100-day moving average just below at 1272.45 for some relief. A break here opening a move lower to the August lows and the 200-day moving average at 1250.00. Resistance now rests at 1281.00 and 1285.00 to start, followed by the 1286.00 area. 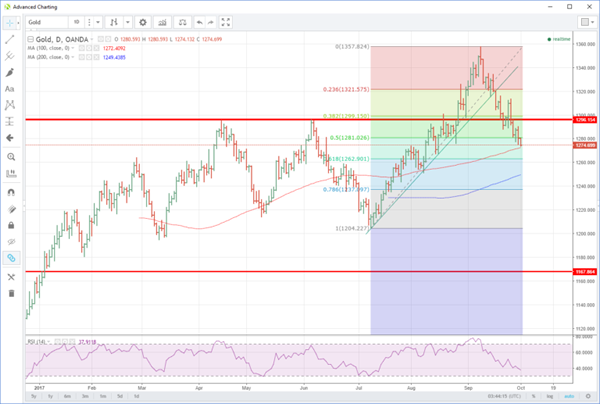