The final estimates of business activity in the euro region were weaker than expected and indicated a further business activity drop. The composite index fell to 48.1 in September from 48.9 a month earlier. Values below 50 indicate the eurozone has slipped from slowing growth to contracting economies after April’s growth peaks. 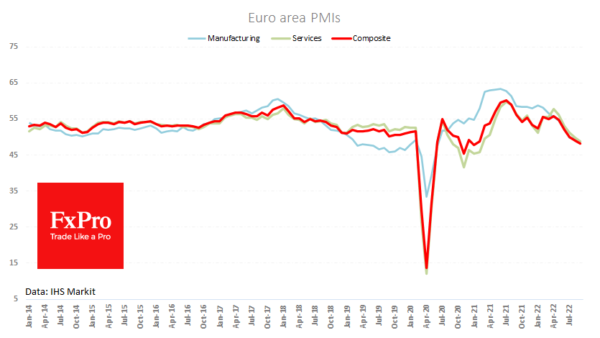 This indicator is good at predicting Eurozone economic cycles, which is why markets often react to its publication. Today EURUSD has come under pressure and is losing almost 1% since the first publication of the final PMIs that were first published for the individual major economies.

A sharp slowdown in business activity could call into question the ECB’s resolve to fight inflation as quickly as possible. In addition, the release of an unexpectedly weaker German trade surplus for August is working against today’s single currency. It is also prompting a reassessment of speculations about capital inflows into the region.

The bad news came just when EURUSD was one step away from testing its 50-day moving average, which has often acted as a resistance line to the downtrend of the last 15 months.