Canadian inflation will dominate the data calendar next week. The backward-looking September CPI numbers should confirm that current price pressures are still too high and broadly based to take the Bank of Canada off its rate hiking path. The central bank’s business and consumer outlook surveys will also be scrutinized for any changes in future inflation expectations.

Headline inflation readings have been declining since early summer as gasoline and oil prices retrench. We expect the rate to tick lower again, to 7% in September. But measures of ‘core’ inflation (measures designed to provide a better gauge of underlying inflation pressures) were likely stickier. We expect year-over-year price growth excluding food and energy products increased in September and the Bank of Canada’s preferred ‘median’ and ‘trim’ core CPI measures are not expected to repeat the small dip in August. That contrast between ‘headline’ and ‘core’ inflation measures will persist in the near-term as resurgent consumer demand for services, especially those that are travel and leisure related, prop up price pressure even as goods inflation eases. Indeed, core inflation isn’t likely to meaningfully slow until December.

Also on deck for next week is the Bank of Canada’s Business Outlook Survey and accompanying Canadian Survey on Consumer Expectations. Changes to inflation expectations are at least as important to watch as actual inflation data as we look for hints on how much further the central bank will go with interest rate hikes. Evidence that high inflation rates were creeping into longer-run businesses’ inflation expectations were a key reason behind the central bank’s decision to go with an outsized 100 basis point hike in July and follow that up with another 75 bp September hike. Those longer-run price expectations likely ticked lower in the latest update. Indeed, separate surveys from the Canadian Federation of Independent Businesses suggest that wage and price plans already peaked earlier this summer.

Upon a gloomier economic outlook for 2023, we also expect business hiring and investment plans to ease from very high levels in earlier quarters. But that won’t be enough to prevent further aggressive rate hikes. Our base case expectation is for another 50 basis point increase in the overnight rate later this month and for the terminal rate to reach 4% by end of year. Upside surprises next week, either from little improvements in inflation expectations or a worsening reading in the actual CPI, risk tilting that to a bigger 75 basis point increase. 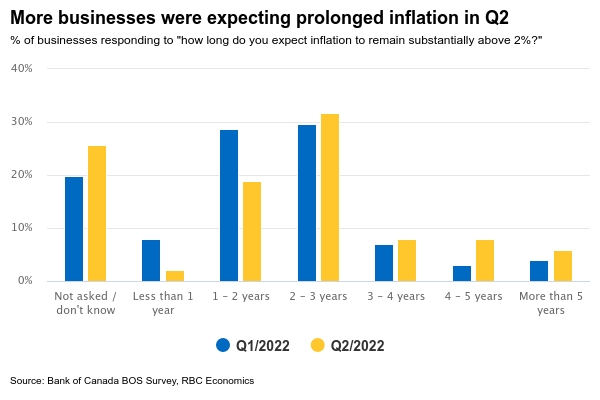 We don’t expect August retail sales to deviate significantly from StatCan’s preliminary estimate of a 0.4% month over month increase. Actual sales volume was likely stronger than that, given offsets from lower prices at gas stations during the month. Sales in September however are expected to flatten out a bit more, according to data from our own debit and credit spending tracker.

Next week’s housing starts data is expected to show another increase, to 284,000 (annualized) in September following near-term strength in building permit issuance. 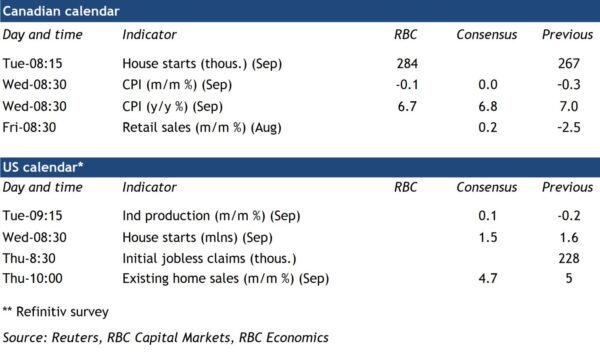