Bank of England Might Disappoint Amid Uncertainties about the Budget

The Bank of England will announce its latest policy decision on Thursday at 12:00 GMT in what will be its first gathering since the mini-budget debacle that sparked turmoil in global financial markets. Expectations of a super-sized rate hike have come down sharply as the panic has receded. Nevertheless, economists as well as investors are still anticipating a big enough move of 75 basis points that would mark the steepest rate increase in 33 years. But is there a chance the Bank will err on the side of caution after the government delayed its Autumn budget statement until after the policy meeting?

By the Bank’s own predictions, the UK economy is expected to be in recession by year-end as rising interest rates and a surge in the cost of living on the back of higher energy as well as broader raw material prices squeeze both consumer and business spending. S&P Global’s PMI survey suggests the economy has already started to contract, with a negative Q3 GDP print looking very likely after a somewhat stronger-than-expected performance in Q2.

Even more worrying is that inflation poked back above 10% in September and has yet to peak. 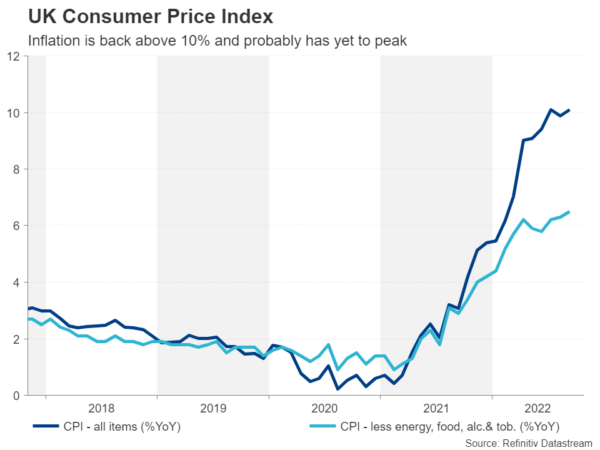 Still reeling from the mini-budget turmoil

If the outlook wasn’t gloomy enough, Liz Truss’ short tenure at Number 10 pushed Britain’s economy to the brink of catastrophe. Ironically, it was Truss’ growth plan that spooked investors as it was built entirely on unfunded tax cuts that threatened to balloon the national debt to unsustainable levels.

Although some normality has been restored after the ruling Conservative party dramatically intervened to oust Truss and speedily replace her with former finance minister Rishi Sunak, the uncertainty has not completely dissipated. For one, Sunak and his new chancellor, Jeremy Hunt, have once again shuffled about the date of the fiscal statement, moving it from October 31 to November 17.

This poses quite a significant problem for the Bank of England as policymakers are being kept in the dark as to the details of the government’s tax and spending plans. Although it is clear that the Sunak administration is doing away with irresponsible economics, the Autumn statement will come too late for the Bank to factor it into its quarterly economic projections. Specifically, policymakers won’t be able to make a judgement on whether the net impact of the new budget on growth will be positive or negative, and if the bulk of the anticipated tax rises and spending cuts will take effect before or after the next general election, likely to be in 2024. 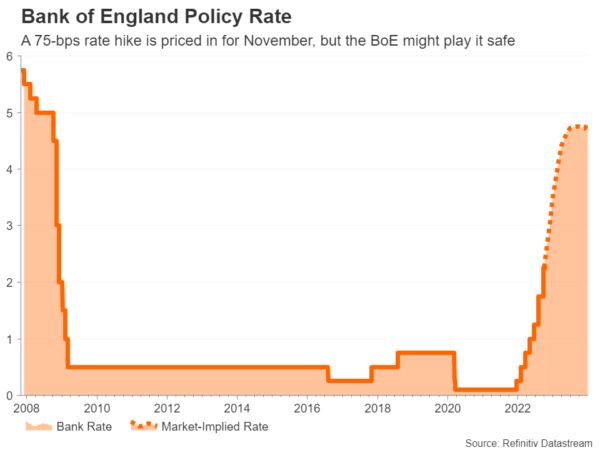 This could be one reason that could sway the Monetary Policy Committee (MPC) towards a 50-basis-point rate hike in November in case Jeremey Hunt goes overboard with fiscal prudence, limiting government support to struggling households and businesses. Sterling’s sharp bounce-back against the US dollar also weakens the case of overreacting with a jumbo rate hike, so does the steadying of the gilt market.

BoE at odds with market expectations

But even if the MPC decides not to go against market expectation on Thursday, it will likely flag that further 75-bps moves are not on the cards in the future. Investors got a strong pushback from Deputy Governor Ben Broadbent when the market pricing of the Bank’s terminal rate topped 5% in the aftermath of the mini-budget fiasco, saying that the damage to the economy from such a high rate would be “pretty material”. Market estimates of how high the Bank Rate will peak have since come down to around 4.75%, but even that might be too high. 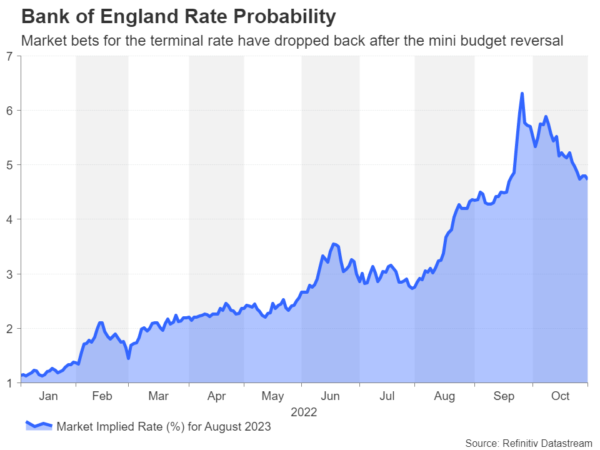 The updated forecast of the rate path in the November Monetary Policy Report will likely therefore attract a lot more attention than usual on Thursday when investors will also get to see whether the inflation projections have been revised lower due to the government announcing a price cap on energy bills.

The energy price cap, not to mention quantitative tightening, are additional considerations for policymakers that lessen the need for aggressive rate hikes. On Tuesday, the Bank finally kicked off the active sale of its government bond holdings, becoming the first major central bank to do so, after its start was delayed following the selloff in gilts in September that nearly caused the collapse in UK pension funds.

If on Thursday, Governor Andrew Bailey attempts to guide markets to a lower rate path than what investors have currently priced in, the pound will struggle to extend its rebound beyond the $1.16 handle and may instead turn lower.

There is a very strong support forming around the 50% Fibonacci retracement of $1.1338 of the August-September downfall, as both the 20- and 50-day moving averages (MA) are converging around this level. If this level is breached, the October trough of $1.0922 would come into scope.

In the unlikely event of a hawkish surprise by the BoE, or a dovish one by the Federal Reserve, which is more probable, the pound could stretch its rebound until the 78.6% Fibonacci of $1.1884.