Last week, we argued that markets could be underestimating the strength in the US economy and that a 75bp hike in December is a non-zero probability event (see Research US – 50 or 75bp? Fed’s December Checklist, 30 November). While we still think the former might be true, and both the November Jobs Report and ISM Services caused sharp reactions in the broader markets, pricing for next week’s meeting remained stable near 50bp.

While we see upside risks to the consensus forecast of November CPI, which combined with higher Univ. of Michigan inflation expectations could still spark some near-term volatility, the focus has already shifted towards the monetary policy stance in 2023.

Since early November, the positive sentiment in bond markets, the inversion on the US yield curve and weakening broad USD have reflected easing financial conditions. We think the move is premature, as private consumption and especially the services sector are still holding up well. Fed needs to close the positive output gap to bring inflation down, but with ISM business activity at the highest level since December 2021 and labour supply stagnating since last March, further tightening will still be needed. 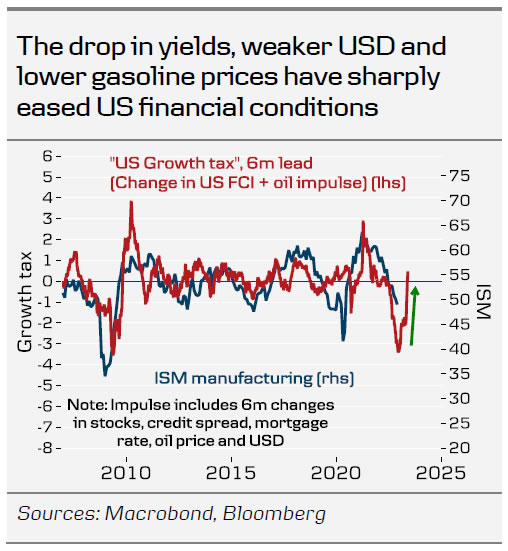 While the weak household survey suggests that the nonfarm payrolls could overstate the strength of US employment growth, even modest job gains are enough to tighten the labour market if supply does not grow at all. Alternative indicators, such as JOLTs job openings, or conference board’s Jobs Plentiful index confirm, that labour demand remains elevated. FOMC members have noted several times that the current wage inflation is far from levels consistent with the 2% inflation target, and the latest data suggests that Fed is hardly making progress towards bringing the market back into balance. 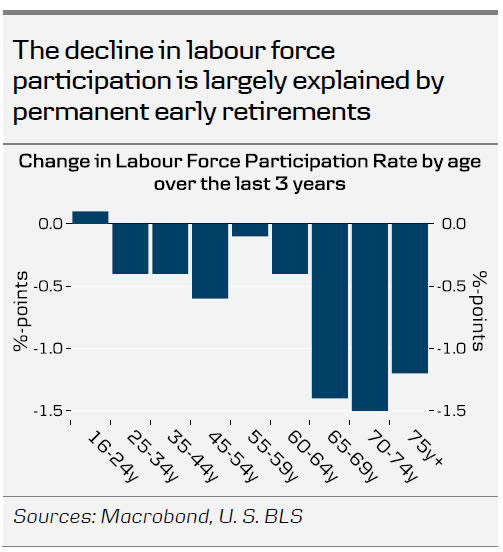 In his final speech ahead of the blackout, Powell noted that risk management does not only refer to calming inflation anymore, but also avoiding a recession. Markets have responded by pricing in the first cuts as early as November next year, which we consider too early.

US economy remains on a path of modest growth in Q4, and Fed needs to force a moderate recession next year to avoid prolonging inflation from here. Getting demand lower requires broad financial conditions to retighten again, which likely includes a combination of more rate hikes in Q1, still elevated longer real yields and stronger USD.

We acknowledge that our earlier call of a 75bp hike next week appears unlikely, but do not think the need to tighten monetary policy further has disappeared. We adjust our Fed call, and now expect 50bp hike next week, followed by 50bp in February and 25bp in March. Thus, we maintain our call for a terminal rate of 5.00-5.25% unchanged.