Fed Decision and US Inflation Stats to Decide Dollar’s Fate

A decisive week lies ahead for the dollar, featuring the latest US inflation and retail sales reports, alongside a critical Fed decision. Business surveys suggest inflationary forces continued to abate, although elevated rents might offset some of that. Meanwhile, a half-point rate increase by the Fed is already locked in, putting the emphasis mostly on the updated ‘dot plot’ projections.

The US economy finds itself at a crossroads. Most leading indicators suggest a storm will hit next year. New business orders are contracting, the housing market has started to crack, consumer morale is low, retailers are swimming in inventory they cannot unload, and the yield curve inversion continues to deepen. All these are classic recession warnings.

However, this weakness in leading indicators hasn’t been reflected in the ‘official’ data yet. The labor market is still in good shape, consumer spending remains resilient, and inflation is sizzling hot. Economic momentum hasn’t evaporated yet despite the barrage of rate increases, mostly because monetary policy works with long lags. 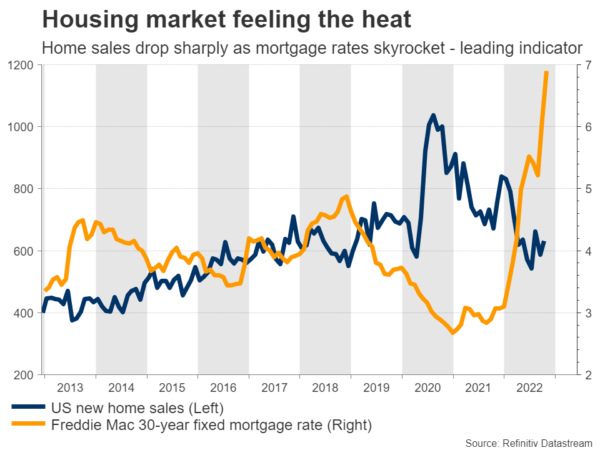 Still, this dichotomy between backward and forward-looking indicators is a headache for Fed officials. Since the full impact of the rate increases they’ve already rolled out hasn’t been felt yet, there’s a danger they will inflict unnecessary economic damage if they keep pressing ahead. As such, the Fed chief changed tune last week, stressing that they don’t want to overtighten.

The show will kick off with the latest CPI inflation data on Tuesday. Forecasts suggest inflation cooled further in November, with the headline CPI rate projected to decline to 7.5%, from 7.7% in the previous month. It’s a similar story for the core number.

Business surveys add credence to these forecasts. The S&P Global services PMI revealed that companies raised their selling prices at the softest pace in two years, offering steep discounts to stimulate sales as demand weakened. Hence, inflation appears to be retrenching, something corroborated by persistent declines in used car prices and shipping costs. 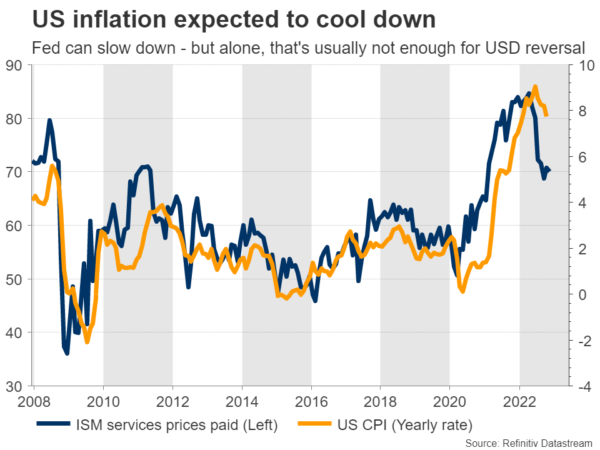 The uncertainty revolves around rents, which account for one-third of the CPI index. Since rents follow trends in house prices but after several quarters, they’ve been heating up lately, playing catch-up with the surge in house prices last year. If this pattern persists, it could negate some of the improvement in other categories.

As for the Fed, the baseline scenario is for a 50bps rate increase on Wednesday, which the market currently assigns a 90% probability to. There’s also a 10% chance for a 75bps move, which is highly unlikely based on Fed communications but not impossible if the upcoming inflation numbers are shockingly hot.

Assuming no surprises on rates, investors will turn to the updated rate projections in the ‘dot plot’ and Chairman Powell’s press conference. Financial conditions have been loosening for two months now with the dollar and US yields retreating while stock markets rallied, which is counterproductive for Fed officials in their inflation battle.

A resolute tone by Powell or a dot plot that shows rates rising to 5%, higher than current market estimates of 4.9%, could breathe life back into the dollar. From a technical perspective, a pullback in euro/dollar could initially challenge the 1.0440 support region.

On the flipside, if the rate projections aren’t quite so high or if Powell adopts a softer tone, euro/dollar could extend its latest advance and spike above 1.0600.

Retail sales stats for November will follow on Thursday, providing insights into how consumption is holding up.

Overall, the outlook for the dollar seems neutral, as it is difficult to envision massive gains or massive losses from here. Some of the elements that fueled this rally seem to be losing their kick, with inflation powering down and the Fed adopting a softer profile, but the storm clouds gathering over foreign economies suggest it’s too early for a bearish reversal. 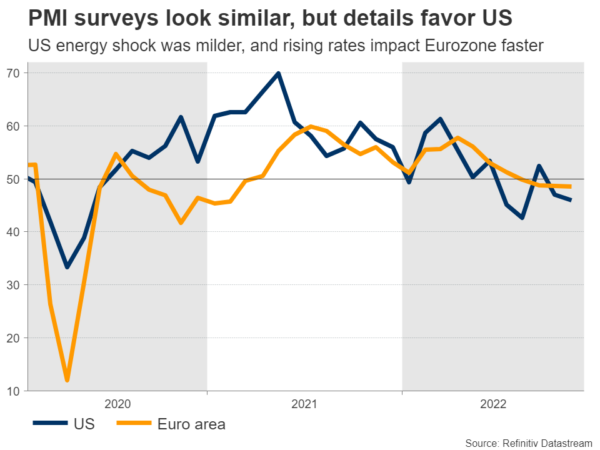 Most major economies are in worse shape than America. The Eurozone and the UK are likely to sink into recession sooner because they faced a severe energy shock in addition to rising rates, whereas China has its real estate crisis to deal with.

The dollar is unlikely to break down in such a gloomy global environment, thanks to its reserve currency status. Therefore, even though the two-year rally is probably on its final legs, the reversal might be a story for late next year.