The Swiss National Bank raised its rate by 50 points to 1.0% after two hikes of 50 and 75 points at the previous two meetings. In an accompanying commentary, the NBS said it was countering rising inflationary pressures.

In the commentary, the central bank says that “further rate hikes are not ruled out”. This is a milder formulation than other G10 central banks without Japan. However, the exact phrase was in the two previous decision comments, so we cannot speak of a softening tone in this case. 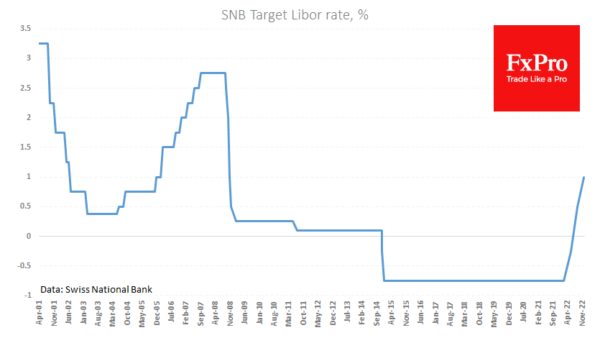 At the recent and previous meetings, the step-up was the same as for our colleagues from the Fed and the ECB: now by 0.5 percentage points, in September by 0.75. However, remember that SNB meetings are twice as rare, so Swiss policy tightening is less drastic. For the year Swiss central bank raised the rate by 175 points against 250 points for the ECB (including the expected +50 today), 340 (also including the forthcoming decision) for the Bank of England and 425 for the Fed.

On the other hand, inflation is not as acute here, having retreated from a peak of 3.5% y/y to 3.0% in the last three months. The producer and import price index retreated to 3.8% y/y in November from 6.9% in June. 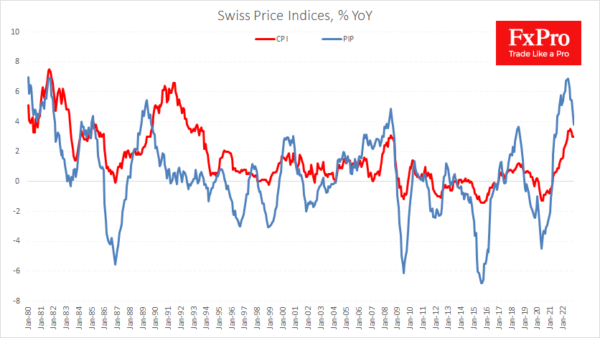 Historically, Switzerland has comparatively lower inflation which is the reason for the lower key rate. Therefore, the current slower pace of monetary policy tightening is not likely to fundamentally undermine the Swiss franc. By playing up the divergence in the speed of rate hikes, the USDCHF could develop a rebound without encountering significant resistance to 0.9400, which looks like a very modest pullback after a more than 9% decline since November 3.