Bank of Japan surprise – another sign of a global dollar reversal

The Bank of Japan made a surprise move on Tuesday morning, extending the permissible yield range of 10-year government bonds. The decision caused the yen to strengthen by more than 3%, and the Nikkei225 index lost as much as 4% before recovering almost half of its initial decline.

The central bank of Japan said at the end of its regular meeting that it would switch from a 0.25% yield target to a 0.0-0.50% target range instead. As yields had been held at 0.25% solely due to BoJ purchases, the range extension immediately sent yields to the upper end of the range. This decision meant that the BoJ would print fewer yen to buy government bonds for the FX market, strengthening the currency.

Strictly speaking, the Bank of Japan has made monetary policy less accommodating. However, the difference with key rates of other countries remains disastrous, as it is the only one keeping rates negative with an active QE phase.

On the other hand, the signal from the softer central bank itself is definite and could be a trial balloon for a fundamental policy reversal. Bank of Japan meetings are no longer boring. 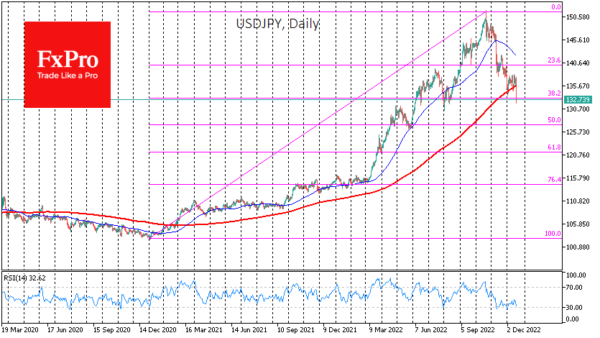 We also pay attention to the timing of the changes. The powerful interventions of the Japanese Ministry of Finance in November stopped the USDJPY rising and confirmed the reversal in the pair thanks to a decisive move down on a break-down of the 50-day moving average.

Throughout December, we saw a three-week consolidation of the pair just above the 200 SMA. The decisive move down after the extended consolidation has been reinforced by the fact that during the lull in the pair, the stop orders pulled closer to the market and are now triggered in droves.

A sharp pullback of the pair under its 200 SMA often signals the reversal of the long-term trend. We had similar signals earlier in the EURUSD and the GBPUSD.

In addition, the fall of the USDJPY below 133 was below the 61.8% retracement of the entire momentum of the pair from the beginning of 2021 to the peak in October 2022. Market participants’ conviction of a hawkish reversal of Bank of Japan policy could trigger a new round of decline in the pair with a technical target near 127. This is where the 50% level of the mentioned last rally and the support area in May of the year gone by are concentrated. 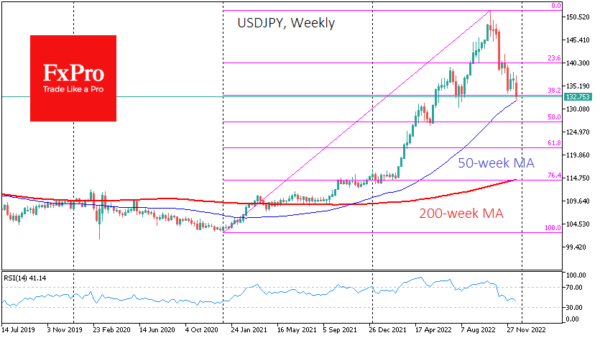