PCE Inflation Unlikely to Bring Festive Cheer to the Dollar

The latest stats on personal income and spending, as well as the all-important PCE inflation figures will hit the markets on Friday before traders abandon their desks for the long holiday weekend. The data could set the tone until the end of the year, with a negative surprise in the Fed’s favourite price indicator potentially boosting risk assets as investors continue to question the steepness of policymakers’ projected rate path. The US dollar, however, would be in danger of further erasing its year-to-date gains in such a scenario.

Inflation by all measures in the United States appears to have finally entered a downward phase, including the core PCE price index, which the Fed puts more weight on for achieving its price stability goal. However, it’s probably also accurate to describe this turnaround as still being in its ‘infancy’. Moreover, with the annual growth in both the headline and core rates so elevated far above the 2% target, the Fed is not about to go easy with its tightening campaign.

But markets no longer seem to be ‘buying’ the Fed’s latest hawkish rhetoric, not so much because they don’t believe its resolve to tame inflation, but because they fear that the current path is already too aggressive and will push the US economy into recession, forcing a policy reversal. Should Friday’s set of numbers follow the recent trend and be on the soft side, investors are likely to be emboldened in their belief that the Fed will be compelled to begin cutting rates in the second half of 2023.

According to the forecasts, there shouldn’t be any upticks in the incoming data. The core PCE price index is expected to have risen by 0.2% month-on-month in November, bringing the annual rate down to 4.7% from 5.0% in the prior month. 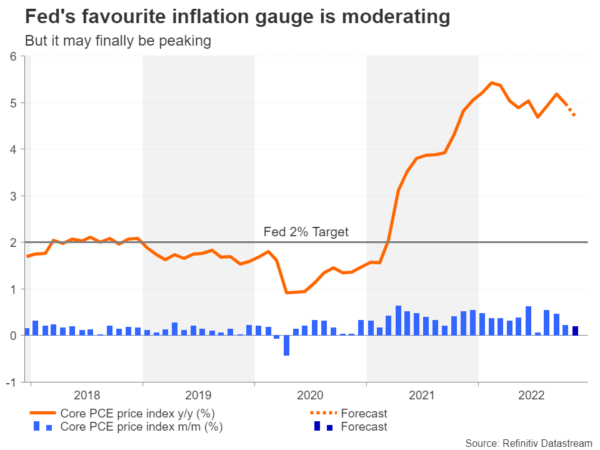 Looking at the personal income and spending numbers, the former likely expanded by 0.3% m/m, decelerating from 0.7% in October, while consumption is also expected to have slowed over the month, rising by 0.2% versus a prior 0.8% gain. 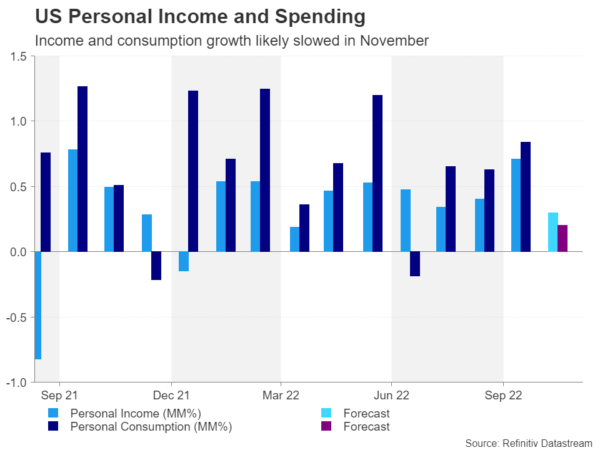 Other data will include durable goods orders, which are forecast to have dropped by 0.6% m/m during November after increasing by 1.1% previously.

The US dollar could face renewed downside pressure if the figures are overall underwhelming or even badly miss expectations. Against the euro, the greenback could weaken towards levels last seen in late May.

At the moment, the euro is hovering around the $1.06 mark as it consolidates after hitting a six-month peak of $1.0735 last week. A leap towards the $1.0790-$1.0800 resistance area is possible if the data disappoint. The uptrend could extend further, towards $1.0945, which is the 50% Fibonacci retracement of the January 2021-September 2022 downtrend, should the core PCE print substantially fall short of the estimates.

However, with markets already on edge about how far the Fed will go in raising interest rates, any positive surprises in the PCE inflation readings might revive dollar bulls, pushing the euro lower towards its 200-day moving average around $1.0340.

Limited upside for the dollar

It’s important to note here, though, that even if the dollar were to get a short-term boost from a strong batch of data, it’s longer-term bullish outlook is increasingly under question. The Fed has potentially reached peak hawkishness, while some other major central banks may continue to hike rates well after the Fed pauses.

In addition, markets are less hopeful that the Fed will be able to achieve a soft landing for the US economy. Hence, the dollar appears to be losing some of the advantages that gave it the upper hand for much of 2021 and 2022.