Will Wounded Dollar Take Another Hit from US Inflation Data?

The US dollar tried to stage a comeback during the first few days of 2023, but any attempts to conquer higher areas proved abortive as disappointing wage growth on Friday added credence to investors’ view that the Fed may indeed need to slow further its rate increases and eventually consider reversing some of its hikes at some point later this year. Will Thursday’s inflation numbers validate or dismiss that belief?

After pushing the triple-hike button four times in a row, Fed officials decided to proceed with a smaller 50bps increment at the December meeting. That said, they still appeared in their hawkish suits, signaling that interest rates may rise to above 5%, while at the press conference, Fed Chair Powell tried to push back against pivot expectations.

Even in the aftermath of that gathering, the Fed chief and most of his colleagues have been adamantly sticking to their guns. Some of the most recent remarks come from Minneapolis Fed President Neel Kashkari, who saw interest rates peaking at 5.4%, and from Atlanta Fed President Raphael Bostic, who favored raising rates above 5% by early in the second quarter and then staying on hold for “a long time”. 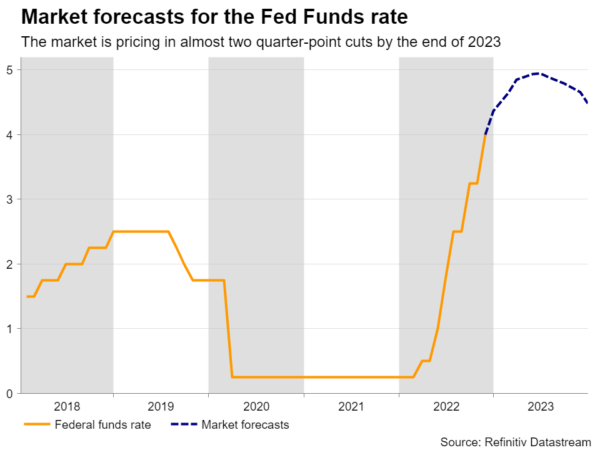 And yet, market participants remained unconvinced that the Fed could outpace their expectations. They are currently expecting the Fed to slow further at its upcoming gathering and deliver a 25bps hike, while they see rates peaking at 4.95% in June. More importantly, they are stubbornly maintaining bets of around 50bps worth of rate reductions by the end of the year.

Perhaps market participants believe that inflation will continue cooling at a fast pace and/or that the already delivered hikes will weigh more on the US economy. This is evident by the fact that they are aggressively selling the US dollar when the data corroborates their view, but they don’t buy with the same excitement when economic releases surprise to the upside.

A recent example of this is that the dollar was bought last Wednesday after the ADP print beat expectations and initial jobless claims fell by more than forecast, but it was sold much more aggressively after Friday’s official jobs report pointed to slowing wage growth, despite still suggesting decent employment gains and an unemployment rate matching its lowest level in the last 50 years. 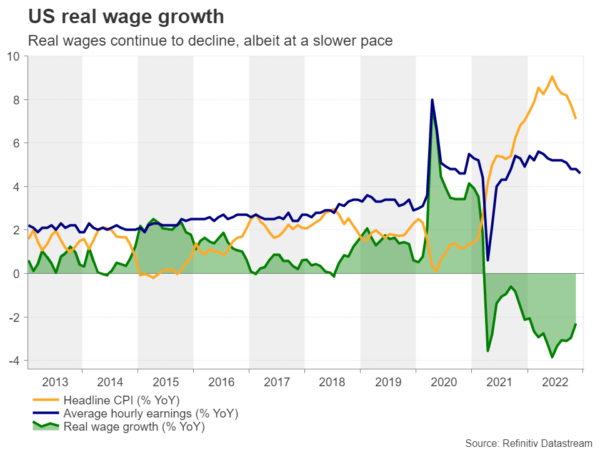 Just after the jobs data, the ISM non-manufacturing PMI for December slid to contractionary territory for the first time since May 2020, which may have amplified the selling of the dollar, despite equities ending the day in the green. This may have been due to expectations of lower interest rates in the future resulting in higher present values for firms valued by discounting expected cash flows.

On Thursday, both the headline and core CPI rates for December are expected to have continued declining to 6.5% y/y and 5.7% y/y from 7.1% and 6.0% respectively. In contrast to the Eurozone, where underlying inflation continues to rise, in the US, underlying price pressures are cooling alongside headline inflation, which supports investors’ view that a Fed pivot may indeed be on the cards for later this year. This is likely to keep the US dollar under selling pressure, and perhaps boost stocks a while longer. 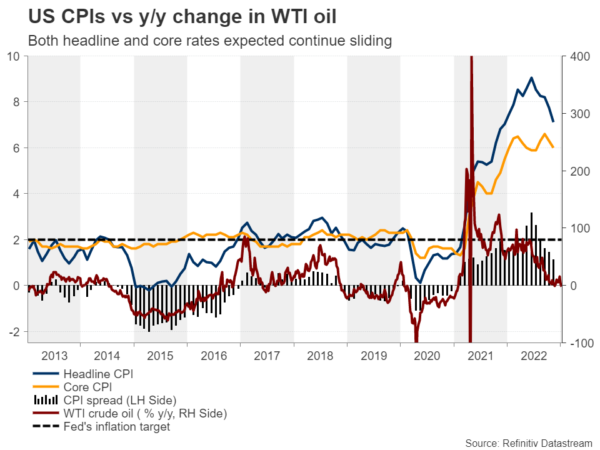 Having said all that though, a deeper contraction of the manufacturing sector during December and a deteriorating service sector (which currently accounts for 77.6% of US GDP) are likely adding to fears about the performance of the US economy and therefore, apart from a weaker dollar, equities may also resume their slide at some point soon. In other words, the inverse correlation between the stock market and the dollar may – even temporarily – break down at some point. 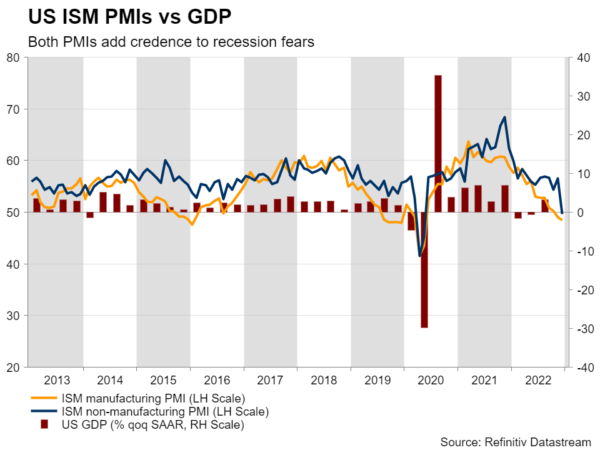 From a technical standpoint, euro/dollar rebounded strongly from 1.0470 after Friday’s jobs report and entered this week on a strong footing, closing Monday above the key resistance zone of 1.0715. The pair is trading well above the prior downtrend line taken from the high of February 10 and above a newly drawn uptrend line from the low of September 28, while just this week, the 50-day exponential moving average (EMA) crossed above the 200-day EMA. All these technical signs point to a positive near-term picture.

A slowdown in US inflation, especially in underlying terms, will contrast with the rise in Eurozone’s core HICP rate and may validate speculation that the ECB may continue tightening more aggressively than the Fed henceforth. This might drive euro/dollar above the important resistance zone of 1.0800. Such a break could encourage more bulls to join the action and perhaps help lift the pair up to the 1.1175 zone, marked by the high of March 31.

Yes, the dollar could still attract some safe-haven flows, but it seems that with Treasury yields coming down, it may have already lost the title of the ultimate safe haven. Therefore, any declines in euro/dollar may be just corrections before the next leg north. For the bears to take full charge of this pair again, a break below parity may be needed, as such a move would also confirm the violation of the uptrend line drawn from the low of September 28.