Heading into its first meeting of the year, the FOMC is likely feeling more content with the stance of monetary policy than it has in some time. Inflation is more convincingly coming down, but without a collapse in hiring and broader demand. That noted, prices are still growing in excess of 2%, and with an exceptionally tight jobs market, the FOMC is not done tightening policy yet, by our estimation. However, the directional improvement in inflation and somewhat softer labor market conditions lead us to believe that the FOMC is past the catch-up phase of this tightening cycle and onto the fine-tuning phase. We look for the FOMC to downshift its pace of tightening further at its Jan. 31-Feb. 1 meeting, hiking the fed funds rate by 25 bps to a target range to 4.50-4.75%.

Slower Inflation, Cooler Hiring Since the Past FOMC Meeting

Since the FOMC last met on December 14, there have been encouraging developments on the inflation front. The slowdown in inflation toward the end of last year looks more concrete after the latest readings on consumer and producer prices. The core CPI increased 0.2-0.3% in each of the past three months, lowering the three-month annualized rate to 3.1% in December from 6.0% in September. Tamer energy and food-related prices are also helping to dampen headline inflation and support real income growth (Figure 1). We have lowered our own estimates for inflation over the next 12 months, and we expect the FOMC to also be a bit more sanguine about the outlook for price growth. 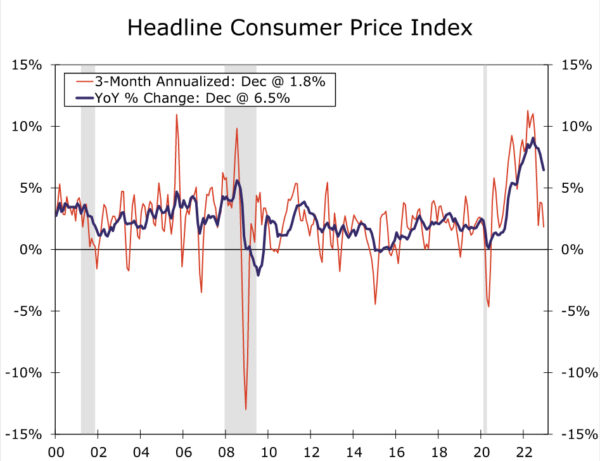 At the same time, the jobs market has continued to gradually cool. December’s rise in payrolls was the weakest print in two years but remained impressive in an absolute sense with 223K new jobs added (Figure 2). Demand for new workers has edged lower based on job openings and hiring plans, yet initial jobless claims signal businesses continue to hold onto existing workers and layoffs are not yet widespread. Perhaps most importantly for the FOMC given its nearly singular focus on inflation, the chances of a wage-price spiral look a little dimmer after the most recent slate of data. Average hourly earnings growth slowed in December from a downwardly revised gain in November, and not all hope may be lost on the labor supply front with an increase in the labor force participation over the inter-meeting period. 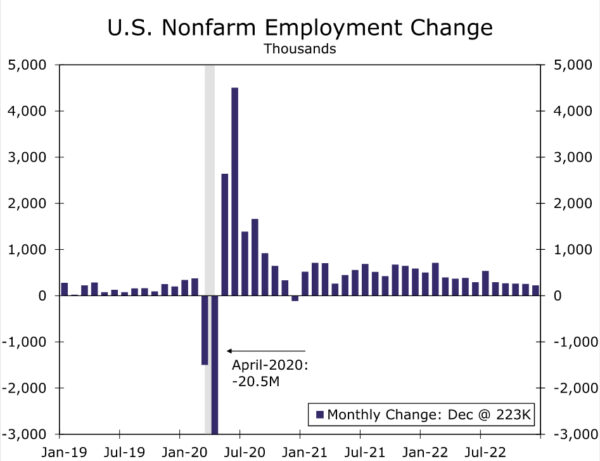 Still Work to Be Done

Despite the improvement, however, inflation remains too high for the FOMC’s liking. In addition, the recent softening in price growth has been driven by a fairly narrow set of components such as gasoline, vehicles and airfares—a sign conditions are normalizing but not in and of themselves enough to convince the FOMC to call the all-clear on inflation. Chair Powell and others on the Committee have voiced concern about the medium-term inflation pressures emanating from the tight labor market. Even accounting for the weaker December data, average hourly earnings growth is still too hot to be consistent with the Fed’s inflation target if the trend rate of productivity growth is 1%-1.5% (Figure 3). At the same time, financial conditions have eased since the December meeting, making it more difficult for the FOMC’s policy efforts to quell inflation to filter through to the economy (Figure 4). 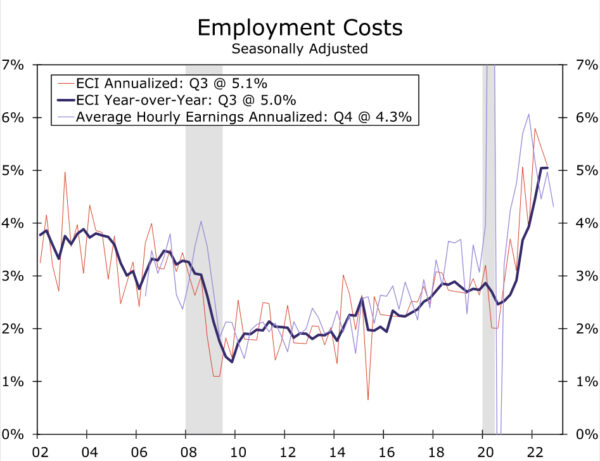 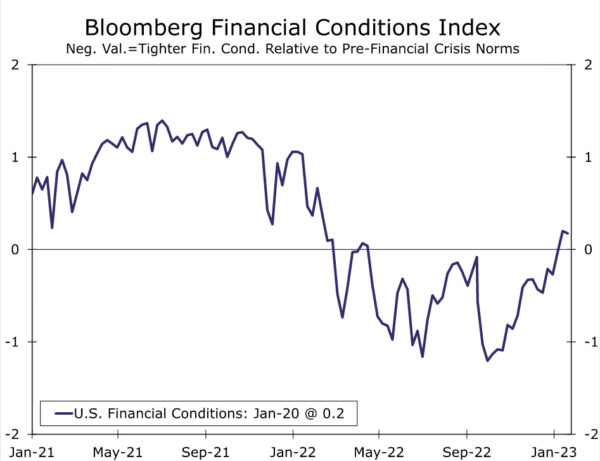 We therefore expect the FOMC will continue to tighten policy at the upcoming meeting, but at a more measured pace. Specifically, we look for the FOMC to raise the fed funds rate by 25 bps, which would mark the smallest increase since the FOMC’s initial rate hike last March and bring the target range to 4.50%-4.75% from 0%-0.25% a year ago. After the dizzying pace of hikes in 2022, policy is better placed to curtail current inflation pressures, leaving subsequent moves as more likely to be tweaks than the “front-loading” efforts of the past year. A number of neutral-leaning Fed officials, including regional Fed presidents Harker, Collins and Bostic, have publicly stated their support for downshifting to a 25 bps hike at the next FOMC meeting. An upside surprise to the fourth quarter Employment Cost Index, scheduled to be released just hours before the meeting kicks off on Jan. 31, is likely the only data point that could divert the Fed from its currently signaled course. Currently, markets are pricing in less than a 10% chance that the FOMC hikes by more than 25 bps.

FOMC to Markets: Rate Cuts Still A Ways Away

Although the FOMC looks set to slow its pace of tightening further, there has been a remarkable degree of consensus among the Committee that policy has not yet reached its final destination when it comes to rates. December’s Summary of Economic Projections (SEP) showed all participants expecting the target range to reach an upper bound of at least 5%, with the median a touch higher at 5.25%. Recent public comments from a slew of officials (Harker, Barkin, Bullard, Daly, and Bostic) have indicated that expectations to raise the fed funds rate beyond 4.50%-4.75% remain intact. We expect the post-meeting statement and Chair Powell in the press conference to reiterate the policy rate has further to go, even if Powell does not provide a pointed update on where participants’ projections for year-end rates would land as he did in November when there also was no update to the SEP.

Moreover, we believe the FOMC will maintain its message that even as the end of rate increases may be drawing near, rate cuts remain a long way off. The latest post-meeting statement already notes that policy will need to be “sufficiently restrictive” to return inflation to 2%, but we could see the Committee adding that a restrictive stance of policy will likely be required “for some time” to underscore that rate cuts are unlikely to come as quickly as in prior cycles.

Markets continue to price in a lower path for the fed funds rate than implied by the most recent dot plot. Fed funds futures currently point to a peak rate this spring consistent with the target range reaching 4.75%-5.00%. The slightly lower terminal rate than our own estimate (Figure 5) and what is implied in the most recent dot plot, 5.00%-5.25%, does not seem terribly unreasonable. After all, the data have softened recently and a 25 bps gap seems small in the context of the 425 bps of tightening executed over the past 10 months. 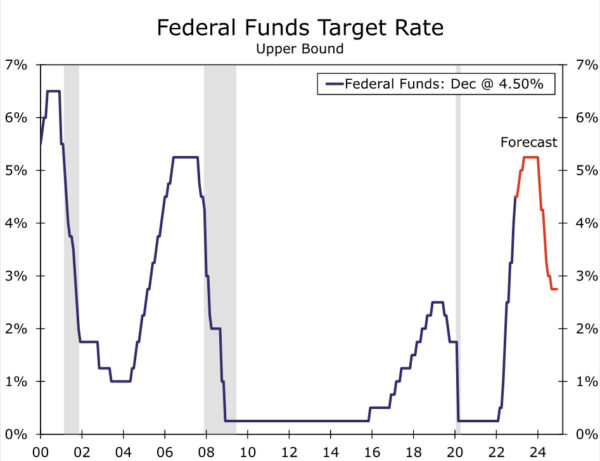 But the roughly 50 bps of cuts priced over the second half of the year is more at odds with Fed guidance (Figure 6). According to the December meeting minutes, “Participants noted that, because monetary policy worked importantly through financial markets, an unwarranted easing in financial conditions, especially if driven by a public misperception of the Committee’s reaction function, would complicate the Committee’s efforts to restore price stability.” While the current gap in market expectations and the Fed guidance appears somewhat bothersome to the FOMC, we believe the Committee will continue its steady drumbeat on the need to hold rates steady long after the final hike this cycle, rather than aggressively push back against current market pricing at this meeting. Instead, like its ultimate goal of bringing down inflation, the FOMC can stay at this message however long it takes, i.e. “until the job is done”. 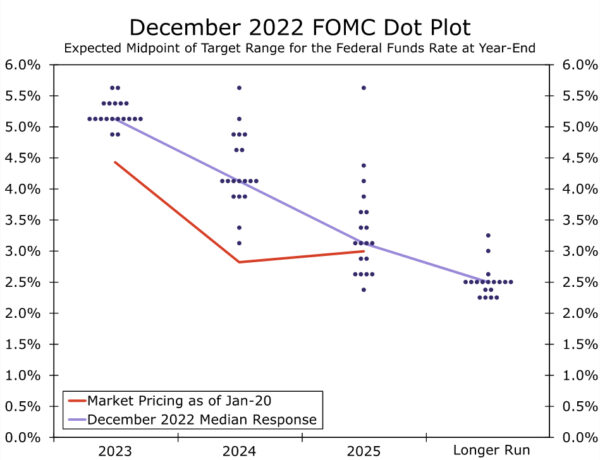 The Fed also has been taking steps to shrink its balance sheet (a.k.a., “quantitative tightening” or “QT”) since June. Initially, the central bank allowed up to $30 billion worth of U.S. Treasury securities and up to $17.5 billion worth of mortgage-backed securities (MBS) to roll off its balance sheet every month. These monthly caps were raised to $60 billion and $35 billion, respectively, beginning in September. Since peaking in April 2022, the size of the Fed’s balance sheet has declined by $476 billion to currently stand at roughly $8.5 trillion (Figure 7). Over that period, the central bank’s holdings of Treasury bills, notes and bonds have dropped by $325 billion while its holdings of MBS is down by about $100 billion. 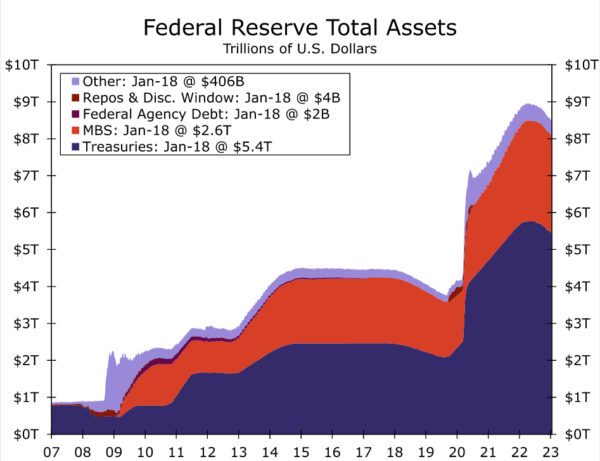 Because recent data indicate the U.S. economy continues to expand, we expect the FOMC will announce on February 1 that it once again will maintain the current monthly pace of QT (i.e., up to $60 billion of Treasury securities and up to $35 billion of MBS). As we wrote in a report that we published in July, we expect that, barring a recession, the Committee will allow the Fed’s balance sheet to shrink to about $6.5 trillion in early 2025 (Figure 8). However, if the economy were to slip into a recession ahead of 2025, then we believe the FOMC will bring balance sheet reduction to an early end because it acts as a form of monetary tightening. Continued QT in conjunction with rate cuts, which the Committee likely would employ to support the economy, would work at cross purposes. 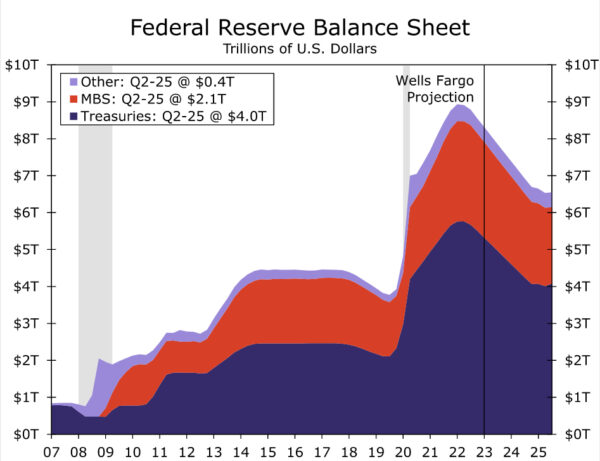 Although the overall size of the Fed’s balance sheet likely would remain unchanged in the event of recession, its composition very well could change. That is, the FOMC stated in January 2022 that it “intends to hold primarily Treasury securities” on the asset side of its balance sheet in the longer run to minimize “the effect of the Federal Reserve holdings on the allocation of credit across sectors of the economy.” Therefore, we could envision a scenario in which the Federal Reserve kept the overall size of its balance sheet constant by purchasing an equivalent amount of Treasury securities to replace the MBS that was rolling off.