Investors will get the first reading on US GDP growth for the fourth quarter on Thursday (13:30 GMT), while on Friday, the last inflation statistics before Fed policymakers gather for their first meeting of 2023 will be watched. The data could be a boon for risk appetite, as the American economy probably grew at a solid clip in Q4, and inflation as measured by the PCE price index moderated further. But the US dollar is looking increasingly in trouble, as the Fed has already strongly hinted that another downshift in the pace of rate hikes is on the cards next week.

It’s a busy few days for US data and fresh out of the oven are S&P Global’s flash PMI estimates for January. US growth stuttered towards the end of 2022 according to both the S&P and ISM surveys and it doesn’t appear that there was a dramatic improvement at the beginning of 2023 as the PMIs point to ongoing contraction in business activity, albeit at a smaller pace.

However, despite the general deterioration in the various indicators, the economy isn’t in a broad-based decline yet and therefore not quite in a recession. Durable goods numbers due on Thursday are expected to show that orders bounced back by 2.5% over the month in December after tumbling 2.1% in the prior month. More encouragingly, GDP is projected to have notched up annualized growth of 2.6% in the final three months of 2022. 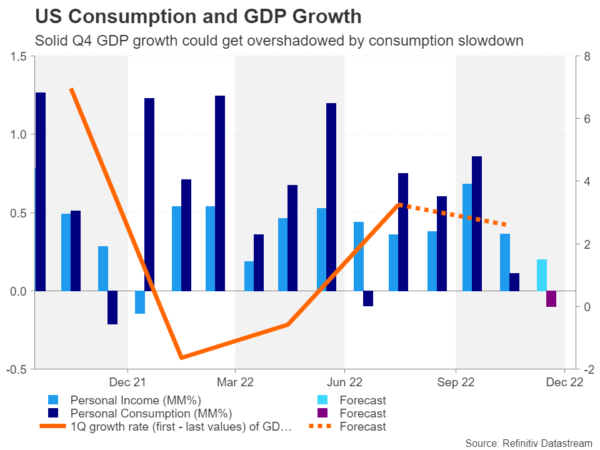 However, Friday’s data on personal income and spending will be more crucial in painting a more accurate picture for what to expect for the current quarter amid signs that US consumers have finally started to feel the squeeze from soaring prices. Personal income is forecast to have risen by 0.2% m/m in December, halving from November’s rate of 0.4%, while consumption is expected to have dropped by 0.1% m/m after increasing by 0.1% previously.

If consumer spending does indeed fall in December, it would suggest that the post-pandemic spending spree has run its course and that the Fed’s series of interest rate hikes have finally started to bite. The outlook for consumers remains clouded because although inflation is falling, which should boost real wages in the coming months, job losses are on the rise, especially in the tech sector.

Nevertheless, the latest PCE inflation figures should offer some relief on Friday if they support the market view that a Fed pivot is nearer than what policymakers would like to publicly acknowledge. The core PCE price index, which is favoured by the Fed, is forecast to have quickened slightly to 0.3% on a month-on-month basis, but the 12-month rate is expected to have edged further down from 4.7% to 4.4%, which would make it the lowest since October 2021. 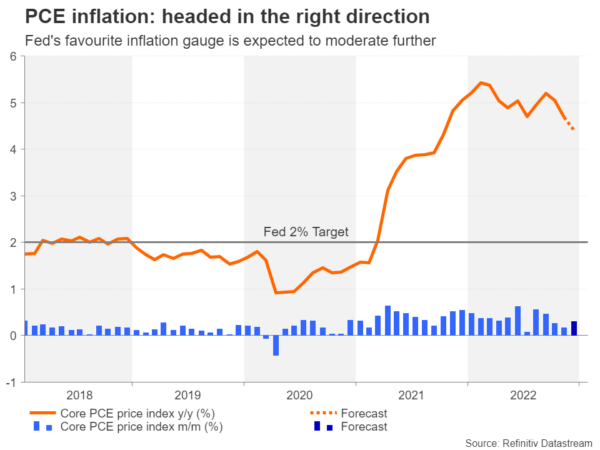 If the downward trend in core PCE is maintained and there aren’t upside surprises in any of the other data points, particularly personal consumption, the dollar is likely to come under pressure. The greenback’s gauge against a basket of currencies is drifting near eight months lows, while the euro has scaled a nine-month peak versus its US counterpart.

Can the dollar regain the front foot?

But the single currency has just reached a key technical level – the 50% Fibonacci retracement of the January 2021-September 2022 downtrend, which may prove to be a more challenging barrier to overcome. Furthermore, with the FOMC and ECB decisions due on February 1 and 2, respectively, some investors might sit on the sidelines until then.

Still, a soft set of data has the potential to lift the euro above the 50% Fibonacci of $1.0942, opening the way for the $1.11 handle. Alternatively, if inflation doesn’t slow as fast as anticipated, the euro could seek immediate support in the $1.0790 region before heading towards its 50-day moving average at $1.0590.

In the bigger picture, the odds might be stacked against the dollar, as the pace of monetary policy tightening between the Fed and other central banks begins to diverge in 2023 and the US economy teeters on the brink of recession. But that doesn’t mean that there is cause to fall too out of love with US assets as this rotation out of the dollar could merely be an adjustment after investors became too optimistic about America’s growth prospects and overly pessimistic about the rest of the world’s.