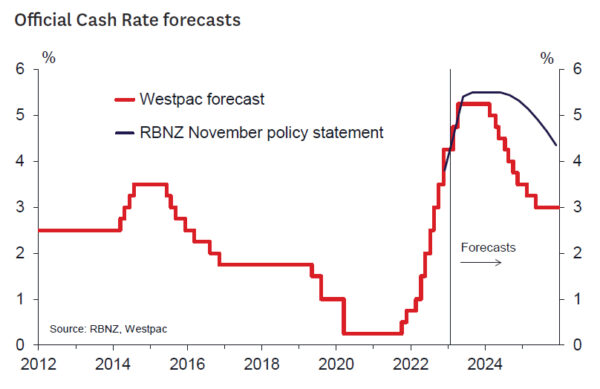 Inflation remains strong. However, it has fallen short of the Reserve Bank’s forecast. At the same time, a slowdown in demand is taking shape and economic growth is set to slow sharply over 2023. Against this backdrop, further hikes in the Official Cash Rate are still needed to get inflation back inside the target band. However, the extent of policy tightening required to do that now looks like it will be more moderate than the central bank had previously signalled.

The Consumers Price Index rose 1.4% in the December quarter. That left the annual inflation rate at 7.2%, just slightly below the 32-year high that was reached in June.

December quarter inflation was boosted by unusually large increases in some specific prices, with food prices up a massive 11% and large increases in both domestic and international airfares. But even adjusting for those sorts of swings in specific areas, there’s no denying that the underlying trend in inflation remains strong and that pressures are widespread. In fact, most measures of core inflation are continuing to track around 6%.

That continued firmness in underlying inflation pressures isn’t a surprise. We weren’t expecting to see an easing in inflation just yet.

However, the RBNZ didn’t just expect that inflation pressures would remain strong: the central bank actually expected an acceleration in inflation in the December quarter. In its last policy statement, the RBNZ forecast that the annual inflation rate would rise to 7.5%, and that it would remain around that level through the early part of 2023.

Instead, inflation has fallen short of the RBNZ’s forecast. Annual inflation peaked at 7.3% back in June. And while still elevated, it doesn’t look like it’s pushing higher. Rather, the annual inflation rate has held steady at 7.2% for the past six months.

Looking ahead, inflation looks set to ease (albeit gradually) back over the year ahead. We’re still updating our forecasts for today’s result, but at this stage it looks like inflation will track well below the RBNZ’s forecast over 2023. 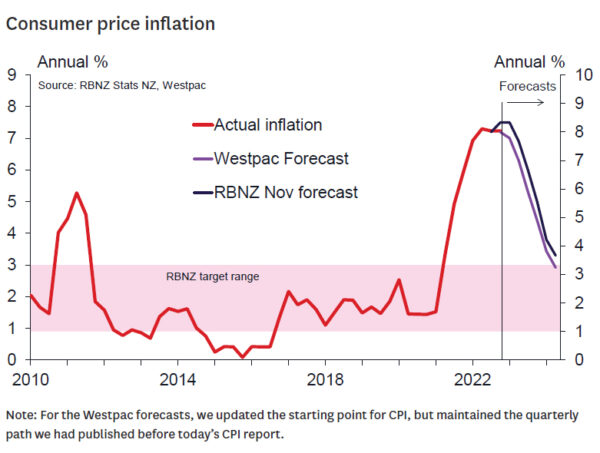 We’re still looking at a strong inflation outlook, with the labour market and businesses’ productive capacity still highly stretched, and international tourism on the rise. On top of that, disruptions to food production and the end of the Government’s fuel excise reductions will both add to inflation over the coming months. Against that backdrop, annual inflation is set to remain over 6% through the first half of this year. But that would still be much lower than the RBNZ had been expecting in November when they delivered a jumbo size 75 bp rise in the OCR and signalled further large increases would be coming in short order.

The past few weeks have also seen some notable developments in terms of economic activity, with signs that the long forecast slowdown in demand is now taking shape. In the household sector, retail card spending declined 2.5% in December, with softness in spending seen across a range of discretionary categories. At the same time, businesses are reporting a downturn in trading activity and forward orders. We’ve also seen job advertisements dropping back.

On top of that, the coming year will see increasing pressure on households’ finances. In part, that’s due to the continued rapid increases in consumer prices that is squeezing households’ purchasing power. In addition, around half of fixed rate mortgages will come up for re-pricing within the next 12 months. In many cases, borrowers will face refixing at interest rates that are 3 percentage points higher than those they are currently on. Those financial pressures, along with the related downturn in the housing market, will be a significant drag on demand – and inflation – over the coming year.

Putting this altogether, we’re still left with a strong inflation outlook and the need for continued interest rate increases to get inflation back inside the 1% to 3% target band. However, the extent of further policy tightening required to do that doesn’t look like it will be as large as the RBNZ had previously assumed. As a result, we’ve revised down our forecast for the peak in the Official Cash Rate.

We’re now forecasting a 50 bp rise in the OCR at the RBNZ’s February policy meeting (previously we forecast a 75bp increase). We continue to expect a 50 bp rise in April with a pause after that time. Those increases would take the cash rate to a peak of 5.25% – lower than the 5.50% peak we previously projected. That’s also below the 5.50% peak that the RBNZ had signalled in their last published forecasts from November.

While we are continuing to forecast a 50 bp hike in April, that will be dependent on the strength of economic conditions over the next few months. If the downturn in demand is sharper than we expect, or if inflation pressures start to cool sooner than anticipated, the RBNZ could opt for a smaller 25 bp hike.