Spain To Trigger Suspension Of Catalan Autonomy On Saturday

Spain’s government will trigger on Saturday the Article 155 of the constitution, which allows it to suspend Catalonia’s political autonomy.

This mornings special cabinet meeting was called after Catalan leader Carles Puigdemont said the regional parliament could vote on a formal declaration of independence from Spain if the central government failed to agree to talks.

Moves are limited, however. Ten-year Spanish, Italian and Portuguese bond yield spreads over equivalent German bunds are by up to +2 bps wider, with the most widening in Portuguese spreads and the least in Spanish spreads. The 10-year Spanish-German spread trades at +124 bps, up +1.2 bps.

The Spanish government have confirmed to hold an emergency Cabinet meeting on Sat, Oct 21st to begin process of suspending Catalan autonomy under Article 155

The EUR (€1.1804) is currently off its intraday Euro highs and is straddling the psychological €1.18 handle 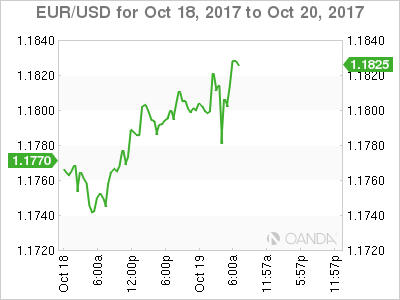