Friday October 20: five things the markets are talking about

There are three themes that are dominating current position taking.

First, political developments in Spain, second, the decision on the next Fed chair that may influence the course of U.S interest rates and third, Brexit negotiations.

Overnight, the ‘mighty’ U.S dollar has climbed against all its G10 peers after the U.S Senate adopted a budget resolution, giving some momentum to President Trump’s planned tax cuts.

Elsewhere, the EUR is underperforming as investors try to anticipate the next move in Spain’s Catalan crisis, while the yen comes under renewed pressure ahead of this weekend’s Japanese election.

Note: Japan goes to the polls on Sunday with a win tipped for PM Abe.

Gold and U.S Treasury prices are both under pressure as safe haven trading has lost some of its lustre for now with investors.

1. Stocks get the green light

In Japan, the Nikkei (+0.4%) has posted its longest winning streak since 1961 on a weaker yen and PM Abe hopes. The index rallied for the 14th consecutive session overnight. For the week, it has gained +1.4%, its sixth straight weekly gain and the longest such winning streak in a year. The broader Topix traded flat.

Down-under, Australia’s S&P/ASX 200 Index rose +0.2% and South Korea’s Kospi index gained +0.7%. In New Zealand, the S&P/NZX 50 Index ended little changed after losing as much as -1.2% in the previous session on the news that Labor party will form a coalition.

In Hong Kong, stock prices rebounded sharply overnight, as investors scrambled for bargains, which was triggered by the People’s Bank of China (PBoC) reference to a ‘Minsky moment.’ the Hang Seng Index rose +1.2%, recovering much of the previous sessions -1.9% decline, and ending the week roughly flat. The Hong Kong China Enterprises Index jumped +1.8%, up +0.3% for the week.

Note: ‘Minsky Moment’ is a sudden collapse of asset prices that follows a long period of growth, sparked by debt or currency pressures.

In China, stocks eked out modest gains overnight, but ended the week lower; amid concerns China’s economy is losing momentum after official data showed growth slowing in Q3 and property sales softening. The Shanghai Composite Index added +0.3% while the blue-chip CSI300 index fell -0.1%. For the week, CSI300 was up +0.2%, while SSEC lost -0.4%.

In Europe, regional bourses have opened higher and are maintaining that trend. The risk sentiment is supported by political developments in U.S. The outlier continues to be Spain due to Catalonia uncertainty heading into weekend. 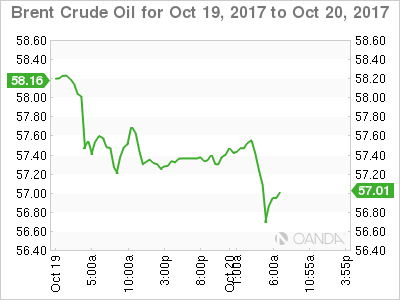 Oil prices have rallied ahead of the U.S open, supported by signs of tightening supply and demand fundamentals, but a warning about excessive China economic optimism continues to provide regional resistance.

Data this week from the EIA showed that U.S commercial crude oil stocks have dropped -15% from their March records to +456.5m barrels, well below levels seen last year.

Gold prices have turned lower ahead of the U.S open as the dollar gains traction after the U.S Senate approved a budget plan for the 2018 fiscal year. Spot gold has declined -0.4% to +$1,284.06 an ounce. The yellow metal is down -1.6% for the week. 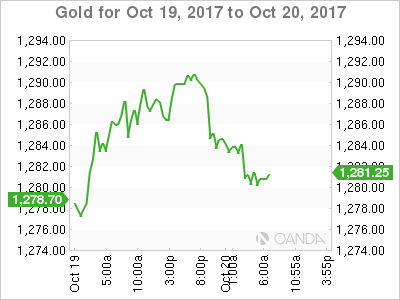 3. Sovereign yields back up

Thus far, the market consensus believe it’s unlikely that we will get an official announcement next week on whether the ECB’s QE tapering will be asymmetric, but there may be hints. The European Central Bank (ECB) meets Oct 26.

Consensus expects the ECB to cut its bond purchase total to €30B from the current €60B per month and continue at that volume for nine months, starting in January. Officials are expected to leave it opened ended, to extend after September, and hint that this decision will be taken in a data-dependent fashion as per usual. 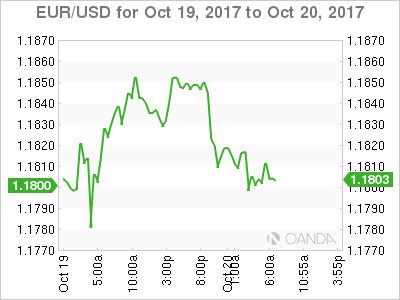 The USD has found traction, supported by the U.S Senate adopting a fiscal 2018 budget resolution that has raised the markets hopes that Presidents Trumps tax plan could actually pass.

Higher U.S Treasury yields are also providing support for the world’s reserve currency of choice. It’s believed that Trump’s advisors appear to be steering him towards choosing either Taylor or Powell as the next Fed chair, which is being considered as a ‘hawkish’ move.

Sterling (£1.3129) continues to trade on the back foot, today’s initial softness being attributed to BoE’s Cunliffe comments that he is committed to the process of slowly raising interest rates, but called the timing an ‘open question.’ However, the currency continues to be guided by Brexit rhetoric.

Elsewhere, USD/JPY is trading at four-month high at ¥113.40 aided by interest rate differentials and by the markets expectation that this weekend’s Japanese election will give PM Abe’s ruling coalition a solid win, with as many as 300 of the 465 seats in the Lower House. 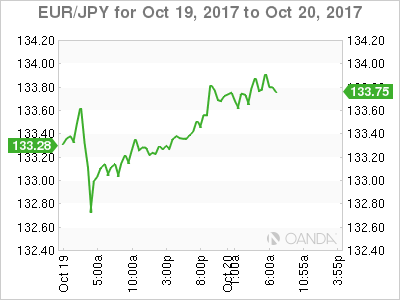 Data from the Office for National Statistics (ONS) this morning shows that the U.K Government borrowing in Britain declined in the first six months of the financial year compared with the same period a year earlier, buoyed by strong tax receipts.

The public sector borrowed +£32.5B in the six months-through September to plug the gap between spending and taxes, compared with +£35B in Q1 of last year.

The figures suggest that Treasury chief Philip Hammond is on track to meet forecasts for borrowing of +£58.3B for the financial year as a whole.

Note: The outlook for U.K public finances has worsened in recent months, however, as weakening consumer spending and uncertainty over the country’s future ties to the European Union weigh on growth. 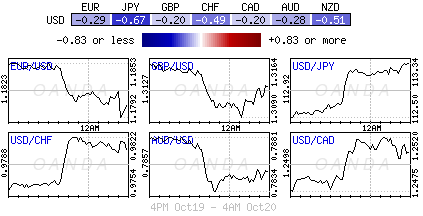