Monday March 20: Five things the markets are talking about

Market volatility remains low across markets from equities to currencies and fixed-income as dealers and investors attempt to evaluate how sustainable the hopeful global economic recovery is.

Investor focus turns away from last week’s central bank statements to U.S policy or Trumponomics. The White House is heading for a busy week, with anticipated House health care legislation coming to the floor and the Senate starting hearings on a Supreme Court nominee (Gorsuch).

Currently, the ‘mighty’ U.S. dollar is heading for its longest losing streak since last Novembers U.S Presidential election, while most major equity indexes falter near their all-time high, while treasury yields trade atop of the recent lows.

On the weekend, the G20 official communiqué upheld their commitment against competitive "devaluation," but also omitted language on promoting free trade (see below).

On the data front, investors this week will be kept busy by Euro and Japanese flash PMI’s. In the U.K, price data and retail sales will be released for February. Minutes of the BoJ’s January meeting and the RBA’s March meeting will be published, while the RBNZ will announce its monetary policy decision.

Last week was the best week since January for global equities.

However overnight, it was a mixed performance. Equities have retreated in Europe, Australia and New Zealand. Japan’s stock market was closed for a holiday, while indexes rose in emerging markets.

Elsewhere, the MSCI’s emerging markets index added +0.4% to hit its highest level in more than two-years.

In Europe, equity indices are trading lower as market participants digest the weekends G20 communiqué. Banking stocks are putting pressure on the Eurostoxx while energy; commodity and mining stocks trade lower in the FTSE 100. 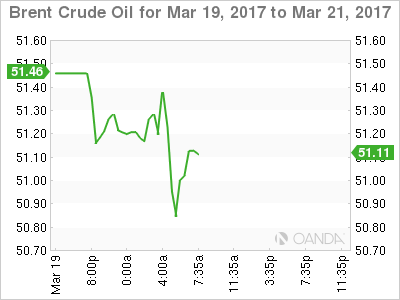 Crude oil prices start the week on the back foot, pressured by rising U.S drilling activity and steady supplies from OPEC countries despite last November’s agreement of production cuts.

Friday’s date from Baker Hughes showed that U.S drillers added +14 oil rigs in the week to March 17, bringing the total count up to +631, the most in 18-months, extending a recovery that is expected to boost U.S shale production by the most in six-months in April.

Gold prices have edged up (up +0.2% to +$1,231.05 per ounce) as the ‘mighty’ dollar stays on the defensive after last week’s "less hawkish" tone from the Fed, despite the rate hike. Yellen’s cautious guidance has the market pricing in almost no chance of another rate rise in May, but rises to 50-50 for June.

Note: Markets are bracing for a packed week of Fed messaging – this week there are nine different U.S policy makers set to speak, including Chair Janet Yellen on Thursday. 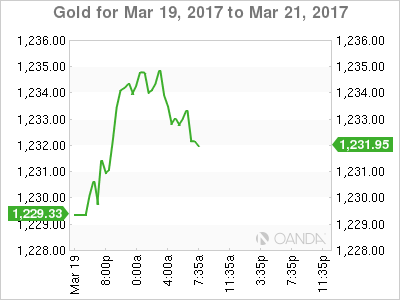 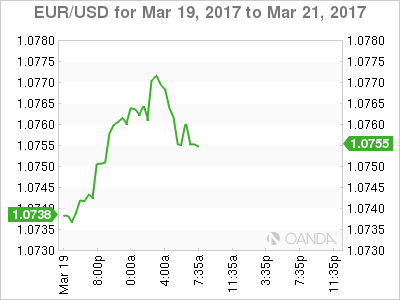 The EUR and GBP have both benefitted from a weaker dollar after the G-20 statement dropped a pledge to promote free trade, reviving concerns about U.S. policy causing disruption to trade. The dollar is also continuing its weakness from a "less hawkish" message from the Fed.

Elsewhere, the KRW (+1.1% to $1,116) trades at a five month high outright amid continued appetite for the currency as the political picture becomes somewhat clearer. TRY ($3.6338) is recovering some of the falls prompted by Moody’s downgrading Turkey’s sovereign rating outlook to negative from stable late Friday. 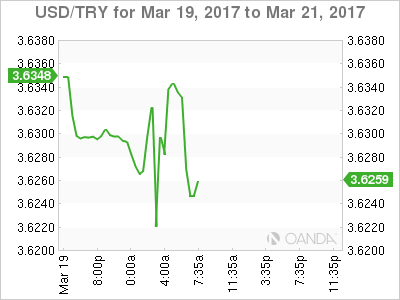 The weekends post-meeting communiqué retained language on avoiding currency manipulation – previously aimed chiefly at Japan and China – but it omitted a call for ‘free trade.’ This may be considered a win for the U.S as it opens the door to more overt efforts by the Trump administration to shift the balance of its international relationships.

U.S Treasury Sec Mnuchin: U.S wants free, but fair and balanced trade. NAFTA would have to be reviewed, some WTO rules needed to be better enforced and older agreements may have to be renegotiated.

Bundesbank President Weidmann: Meeting was marked by intense struggle for a common position, still much to discuss on trade. Agreed now is the time to implement structural reforms.

Japan Fin Min Aso: No one at the meeting remarked that they were against free trade and confirmed importance of free trade despite language in communiqué.

IMF’s Lagarde: Global cooperation and pursuing the right policies can help achieve "strong, sustained, balanced, and inclusive growth, while the wrong ones could stop the new momentum in its tracks." 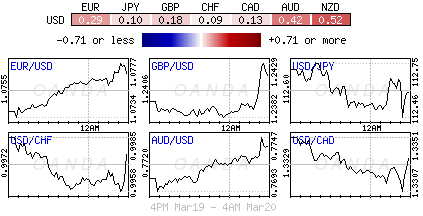