Tuesday February 6: five things the markets are talking about

Volatility in stocks has pushed a number of investors to unwind equity bets and head to the ‘mighty’ dollar and the Japanese yen, another haven.

The dollar has also been benefiting from last Friday’s robust U.S employment data. However, despite the greenbacks recent gains, the prospect of faster-than-expected monetary policy tightening abroad has left the buck atop of its lowest level outright in more than three-years.

Note: Yesterday, the VIX saw its biggest daily climb ever, both in percentage and absolute terms.

Yesterday, U.S. stocks plunged the most in more than six years and volatility roared back into the market as the S&P 500 sank -4.1%.

In Japan, stocks suffered their biggest point drop in 18-months overnight on fears about rising U.S bond yields and a potential pick-up in inflation. The Nikkei share average ended down -4.73%, while the broader Topix fell -4.4%.

Down-under, Australia’s S&P/ASX 200 traded at levels last seen in October as it slide -3%, while S. Korea’s Kospi was the outperformer in dropping just -1.8%.

Note: Hong Kong is particularly exposed to U.S rate moves because the HKD is pegged to the U.S dollar.

In China, Shanghai stocks post their worst day in two-years. The Shanghai Composite Index slumped -3.4%, its biggest single-day drop since February 2016, while the blue-chip CSI300 index ended down -2.9%.

In Europe, regional equities move well off its opening levels, but remain in negative territory as U.S futures stage a sharp turn around. Earnings continue to dominate corporate news. 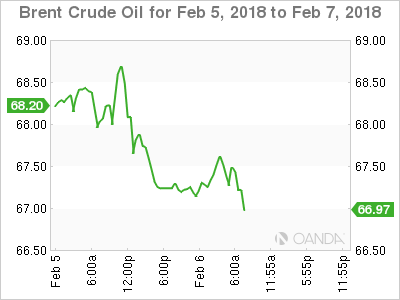 Oil prices have fallen for a third consecutive session overnight, although the crude price remains in positive territory so far this year.

Oil is caught up in the markets general risk-off move and not helped by the strength of the U.S dollar in the past two trading sessions.

Adding to the pressure on oil, which hit its highest price in nearly three-years in January, has been evidence of rising U.S crude production, which could threaten OPES’s efforts to support prices.

Data from the U.S government last week showed that output climbed above +10m bpd in November for the first time in nearly fifty-years, as shale drillers expanded operations.

Gold prices have rallied overnight as the global equity rout encouraged investors to seek shelter in safe havens, although expectations of more U.S rate hikes this year will weigh on the market. Spot gold is up +0.3% to +$1,342.95 per ounce, following yesterday’s +0.5% gain. 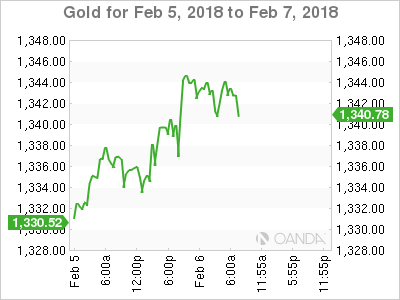 The RBA overnight chose to stay out of the global shift among central banks toward higher interest rates, amid deep fears that domestic household debt burden would not stand up well to the pain of rising mortgage costs.

The RBA left its cash rate unchanged at a record low +1.5%, signalling no desire to follow the likes of the Fed, the BoE and the ECB in removing the policy accommodation.

Governor Philip Lowe said he remains hopeful that growth and inflation will trend higher this year, but stressed the big uncertainty is the outlook for consumers.

Elsewhere, investors have been dumping government debt, but for different reasons. In the U.S, investors see more inflation coming; while in the eurozone, they see stronger economic growth. 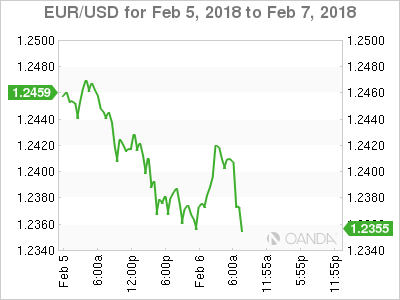 The USD remains on soft footing, unable to gather any safe-haven demand despite the pickup in global volatility.

EUR/USD (€1.2400) continues to maintain within its recent consolidated range, €1.2350-1.25, supported by the market sentiment that the eurozone is expanding robustly with stronger growth rates than previously anticipated.

GBP/USD (£1.3935) remains on the defense, as U.K ministers seem to have a difference of opinion on the Brexit strategy.

USD/JPY ‘s strong correlation with U.S interest yields seems to have broken down as the pair tested ¥109 in the session overnight despite the BoJ’s rhetoric that it would continue advocating an easy monetary policy.

Note: The BIS said that central banks must be prepared to intervene to stem risks from digital currencies, as Bitcoin has become a "combination of a bubble, a Ponzi scheme and an environmental disaster." 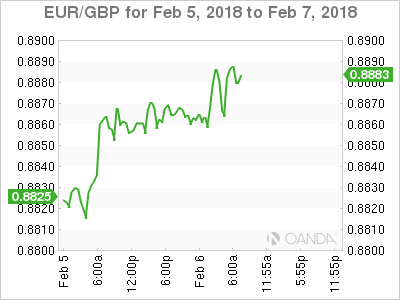 Orders, adjusted for seasonal swings and inflation, increased +3.8% after dropping a revised -0.1% in November. Demand was up +7.2% from the previous year.

The Bundesbank says the German economy will maintain its momentum. After growing +2.2% last year, GDP is forecast to increase +2.5% in 2018. 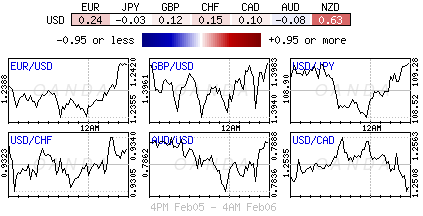