FOREX: The dollar index was marginally lower on Thursday, after previously posting notable gains on Wednesday, as yields on longer-dated US Treasuries moved higher. Meanwhile, sterling was a little higher ahead of the Bank of England’s “Super Thursday” policy meeting. The kiwi dollar slipped, as the RBNZ disappointed those looking for an upbeat assessment.

STOCKS: US equity indices experienced another volatile session on Wednesday, and finished lower overall. The Nasdaq Composite fell by 0.9%, the S&P 500 closed 0.5% lower, while the Dow Jones declined by 0.1%. The shaky performance of these indices indicates that investors still appear skeptical of reentering long-equity positions, following the recent turmoil. Futures tracking the Dow, S&P, and Nasdaq 100 are all in positive territory, albeit marginally. In Asia, most markets were in the green. Japan’s Nikkei 225 and Topix finished higher by 1.1% and 0.9% respectively, while Hong Kong’s Hang Seng was up by 0.4%. In Europe though, futures tracking all of the major stock indices were in the red.

COMMODITIES: Oil prices were lower on Thursday, with WTI and Brent crude being down 0.1% and 0.3% respectively, both extending the notable losses they posted yesterday. The sharp plunge in prices came after the weekly EIA inventory data. Even though crude stockpiles rose by less than expected, the energy market finally took notice of the soaring US production, which surged to a record high of 10.25 million bpd. Should tomorrow’s Baker Hughes oil rig count reveal a further increase in active US rigs, prices could remain under pressure, on speculation that US output may increase further. In precious metals, gold was lower by almost 0.4%, last trading near the $1,312 mark. 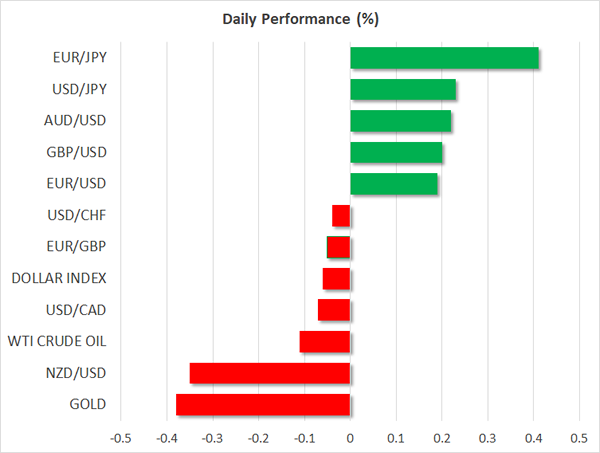 The Reserve Bank of New Zealand (RBNZ) kept its policy unchanged yesterday, while the tone of the accompanying statement was somewhat more cautious than previously. The Bank noted that the nation’s growth profile is now weaker in the near-term, but stronger in the medium-term, while it also acknowledged the softness in the latest set of inflation data.

As for the kiwi, officials said that it has firmed recently, mostly due to the weak US currency. Importantly, they now assume that the trade-weighted exchange rate will ease over time. Moreover, in the press conference following the decision, assistant Governor McDermott indicated that if the trade-weighted index moves up, then investors should expect more aggressive language on the NZD. The two key takeaways from this meeting were that any rate hike in New Zealand is still a long way off, and that any further strengthening of the NZD would probably see the Bank threaten FX intervention, as it did multiple times in the past. Kiwi/dollar fell on the decision and continued lower in the following hours.

German political leaders finally managed to strike a coalition deal yesterday, after several months of negotiations. The deal must now be approved by the members of the SPD. Even though Germany will now most likely have a stable and pro-EU government, the euro remained on the back foot yesterday, before rebounding somewhat today. The weakness is being attributed to disappointment that SPD leader Martin Schulz will not be taking over the finance ministry, given his anti-austerity views.

In the US, Congressional leaders struck a two-year budget deal that will raise federal spending by $300 billion. If approved by Congress, this plan would add further to the rising US deficit, that has been a major concern for investors lately as the nation’s long-term debt sustainability appears to be in jeopardy. Bond markets took notice of this, with the yields on longer-term US Treasuries rising notably. Interestingly enough, the dollar managed to rise alongside yields, reviving a relationship that had largely broken down in recent months.

In terms of economic data, Chinese exports and imports beat expectations, with the latter surging by an impressive 36.9%, almost four times the amount analysts projected. This resulted in a mush narrower trade surplus (exports minus imports) than expected and led to a considerable decline in the yuan relative to the US currency. Dollar/yuan was up by more than 0.4%. On Wednesday, the pair touched 6.2548, its lowest since August 2015. It should be mentioned that the release was likely distorted by seasonal effects owed to the Lunar New Year festivities. 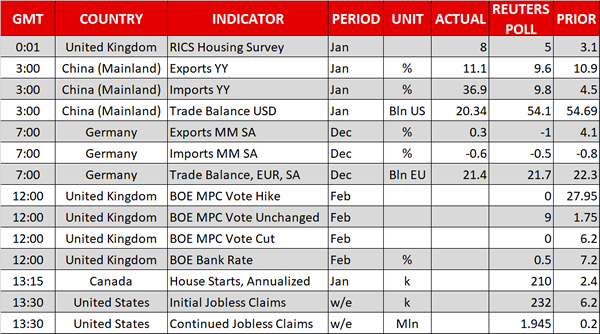 Day ahead: BoE meeting the day’s highlight; US jobless claims due

The European Central Bank’s Economic Bulletin will be released at 0900 GMT. The report contains statistical data that policymakers use when deciding on interest rates, while it also offers an analysis on current and future economic conditions from the central bank’s perspective.

Without a doubt the highlight of the day will be the Bank of England meeting on monetary policy. The Bank’s decision on rates will be made public at 1200 GMT. No change in rates is expected, with attention falling to the central bank’s quarterly inflation report which will include updated forecasts on economic growth and inflation; this will also be released at 1200 GMT. The vote count could also attract attention. While forecasts point to a unanimous 9-0 vote to hold rates unchanged, investors may look at whether notorious policy hawks such as Ian McCafferty and Michael Saunders will choose to dissent and vote for a hike instead, potentially increasing expectations that such an action may occur in the near future. Shortly after (at 1230 GMT), Governor Mark Carney will be holding a press conference. His comments have the capacity to spur volatility in sterling pairs, with market participants placing bets on the timing of the next interest rate hike by the BoE.

An appreciating British currency in 2018 is supportive of inflation moving lower towards the BoE’s target for annual inflation of 2% and allowing the central bank to proceed more aggressively with its policy normalization plans. This is an issue that Carney might comment on during today’s press conference.

Canadian housing starts for the month of January are scheduled for release at 1315 GMT.

US weekly data on initial and continued jobless claims are due at 1330 GMT. First-time unemployment benefit claimants are anticipated to increase by 2k relative to the week ending January 27 when they stood at 230k. A number below 300k is linked to a healthy jobs market. Should claimants stand below this level as expected, it would mark the 153rd such week, this being the longest streak since 1970.

Beyond the BoE press conference, other policymakers’ appearances include: ECB chief economist Peter Praet and Dallas Fed President Robert Kaplan – a non-voting FOMC member in 2018 – will be speaking at a conference in Frankfurt at 0950 GMT. ECB executive board member Yves Mersch will be giving a lecture touching, among others, on central banks and digital currencies, at 1000 GMT. Other FOMC policymakers talking today are Philadelphia Fed President Patrick Harker (1300 GMT) and Minneapolis Fed President Neel Kashkari (1400 GMT) – neither holds voting rights within the FOMC during the current year. Lastly, Bank of Canada Senior Deputy Governor Carolyn Wilkins will be giving a speech at 1800 GMT.

In equities, the earnings season continues with Twitter and Philip Morris getting in line to release quarterly results. 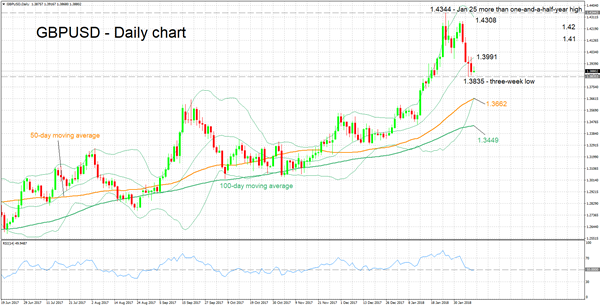 Technical Analysis: GBPUSD in wait-and-see mode ahead of BoE

GBPUSD has lost ground after posting a more than one-and-a-half-year high of 1.4344 on January 25. The RSI has been falling in previous days, pointing to negative short-term momentum. However, at the moment it is hovering around the 50 neutral level. This could be an indication that markets are in a wait-and-see mode ahead of the Bank of England meeting and subsequent press conference by the Bank’s Governor.

Any signs that the BoE will tighten policy sooner than earlier thought, are anticipated to lead the pair higher. In this case, resistance could come around the middle Bollinger line – a 20-day moving average line – at 1.3991. The area around this level also encapsulates the 1.40 handle, a level of potential psychological importance. An upside break would turn the attention to 1.41, this being another level that may be of psychological significance.

On the other hand, a dovish message by the BoE is expected to lead to weakness in the pair. Immediate support might come around Tuesday’s three-week low of 1.3835. Price action is currently taking place not far above this level, with a violation bringing into view the 50-day MA and lower Bollinger band, both at 1.3662.

RBNZ Orr: Pleasing how resilient New Zealand economy has been