The USD was lower against most major pairs as trade fears receded and sparked a sell off of the American currency. The ADP will mark the first release of February employment data in the US at 8:15 am EST on Wednesday, March 7. Strong gains are expected from private payrolls with the market looking ahead to the U.S. non farm payrolls (NFP) on Friday with a special attention paid to the wages component seeking signs of higher inflation. The Bank of Canada (BoC) will release its rate statement at 10:00 am EST with no press conference to follow the release of the statement. Weekly crude inventories will be published at 10:30 am EST with the results guiding prices that are caught in a tight trading range. 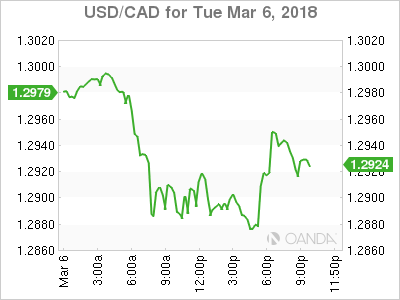 The USD/CAD lost 0.52 percent in the last 24 hours. The currency pair is trading at 1.2898 ahead of the Bank of Canada (BoC) rate statement. The BoC will publish its statement on Wednesday, March 7 at 10:00 am. The central bank is not expected to make changes to the benchmark interest rate, keeping it unchanged at 1.25 percent. Canadian fundamentals have slowed down since the BoC hiked rates two times in 2017. The uncertain fate of NAFTA has also keep the loonie under pressure as Donald Trump’s words on trade are not reassuring investors the trade deal can be renegotiated.

The BoC is still expected to raise rates three more times in 2018 to keep up with the U.S. Federal Reserve. The US central bank is anticipated to hike three or four times this year as the economy keeps growing at steady pace, with the biggest question mark being the slow path of inflation. The fourth quarter of 2017 marked a slowdown of Canadian indicators after a strong Q3, but the close relationship it has with the US and the White House’s tough talk on trade are keeping the USD/CAD near 1.30 despite the market selling off the USD to seek higher returns. The lonnie recovered ahead of the BoC but all eyes will be on the U.S. jobs data this week looking for signs of US inflation and validating four rate hikes from the Fed this year.

The CAD and the MXN recovered from earlier setback as the anti-trade rhetoric from Washington has moved to the background, but with the NAFTA renegotiations talks leaving very little to show for seven rounds it would apear it could be a short lived respite. Mid term elections in the US and presidential elections in Mexico will make the team of negotiators harder as the trade agreement will become a political target. 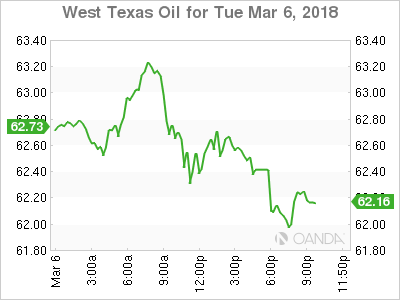 The price of energy is close to its opening price on Tuesday. West Texas Intermediate is trading at $62.60 after opening in Asia at 62.73. Crude is trading in a tight range oil ahead of the weekly US crude inventories release on Wednesday, March 7 at 10:30 am EST. The Organization of the Petroleum Exporting Countries (OPEC) partnered with other major producers to limit oil production but the stage is set for the US and other nations who did not join the agreement to start ramping up supply. The International Energy Agency released today a report forecasting that 80 percent of global demand will be met by non-OPEC producers.

The softness of the USD after trade talks and North Korea closer to a historic summit with North Korea have kept the price of energy from falling ahead of the release of crude stocks in the US. The market is forecasting a rise of 2.5 million barrels in crude inventories. 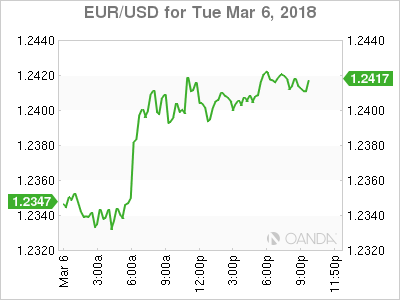 The EUR/USD gained 0.57 percent on Tuesday. The single currency is trading at 1.2406 after the EUR has recovered from the political anxiety going into the previous weekend. Italian election results came in as predicted with a hung parliament as the most likely outcome but noting a rise of anti Europe representation. The German coalition formed a new government with the SDP once again teaming up with Merkel’s CDU/CSU to form a grand coalition despite their initial reluctance. In Germany like in Italy nationalist parties are on the rise making it harder for pro European parties to stay in power without coalition partners. The political hurdles behind the euro rose against the US dollar and is looking ahead at the European Central Bank (ECB) monetary policy meeting on Thursday.

The ECB is not expected to announce any major changes but could continue playing its neutral card as economic indicators have not been impressive of late, added to that is the rise of anti-trade rhetoric in the US but the central bank could still remove key language in its statement clearing the way for an end of quantitive easing in Europe. The rhetoric form the ECB will be measured to avoid sounding too hawkish, while at the same time avoiding a rise in the currency. The ECB is due to release its economic forecasts, but economists do not expect major deviations from previous targets.